The international community’s plans for a response to the crisis in the Central African Republic (CAR) have accelerated in the past few days.

On the Hill on Tuesday, the House Foreign Affairs Committee on Africa held an open hearing on the crisis in the Central African Republic. In his testimony, Principal Deputy Assistant Secretary of State Robert Jackson announced a plan to request authorization from Congress for $40 million in support of  MISCA (the Africa-led International Support Mission in the CAR), which will take the form of logistical, non-lethal equipment, training, and planning assistance.

Across the Atlantic, the French government has announced that it will increase its forces on the ground in the CAR from 410 to 1,200 troops in support to the planned 3,650 MISCA troops.  Burundi has reportedly pledged to send 800 men and the Republic of Congo will contribute financially to the operation. Rwanda is also ready to help.

A sense of real emergency is being felt across the globe and with it comes the risk of some possible coordination problems. Whereas members of the International Contact Group on the CAR, which includes the U.S., France, the African Union, and the U.N. agreed on November 8 in Bangui to deploy MISCA, a recent report by Secretary General Ban Ki-moon to the U.N. Security Council reportedly mentions deploying a peacekeeping operation to the CAR should there be a “precipitous deterioration” of the crisis. Note also that Chad—an important actor in any resolution scenario of the CAR crisis—was recently elected by the U.N. General Assembly to serve a two-year term on the U.N. Security Council.

Whether it will be soldiers from neighboring peacekeeping missions in the Democratic Republic of the Congo or Sudan that will be moved to the CAR or MISCA that is deployed and later converted to a U.N. peacekeeping operation, let’s hope that all stakeholders can coordinate their efforts rapidly and send troops on the ground by December to restore security in the country. There is a consensus that the situation is much worse on the ground than it appears from Washington. Ambassador Jackson even used the term “pre-genocidal” to qualify the situation, and the testimonies from Bossangoa’s Archbishop Nogon and NGO staff who returned recently from the CAR were heart-wrenching.  It is heartening to hear that NGOs have maintained their capacity to operate in the CAR. It is also encouraging that, in spite of the rising violence between Christian and Muslim groups, religious leaders from both sides remain the most if not the only credible institutions in the country. They all have to be commended and supported as humanitarian needs are rising rapidly and the security situation is deteriorating fast.

Resolving the crisis in the CAR is complex and in terms of prioritization, restoring security is top on the list. A consensus is emerging about the remaining key issues.  But now is also the time to lay the ground work for an economic recovery and it starts with—yes, security—but food security this time. Once food security is restored, actions will be needed to restart the agriculture sector, the backbone of the CAR economy that has been damaged by the crisis.  Once again, the international community will have to help.

Because of the violence, many farmers have fled their farms, leaving crops untended and their livestock stolen or killed. The food insecurity situation has worsened drastically since the beginning of the crisis. The World Food Programme (WFP) estimates that because of the violence, 1.1 million people in the CAR may be going hungry, and there may not be enough food in the country to cover people’s needs through January or February of 2014. The Food and Agriculture Organization also reports that disruptions in agricultural activities and input shortages will result in reduced and delayed harvests (see figure below).

In addition, reduced activity in the agricultural sector will severely affect economic growth, as this sector accounts for more than half of GDP and an even larger share of employment. Agricultural exports—cotton and coffee (the largest source of foreign currency, together with diamonds)—will fall and weaken government revenues.

How can the international community help address these two issues?

First, humanitarian aid will be needed to restore food security. The FAO reports that the international community currently plans to assist 1.6 million beneficiaries for a total cost of $195 million. The appeal has so far received 40 percent of its required funding. Second, restoring peace and encouraging farmers to return to their homes (which some have lost) and providing them with inputs such as seeds should help kick-start agriculture and the economy. Restoring the agricultural sector should also prove to be useful to reintegrate former soldiers and rebels into society. One major challenge, however, will be for the restoration of peace and the timing of aid delivery to be consistent with the crop calendar (see figure below). 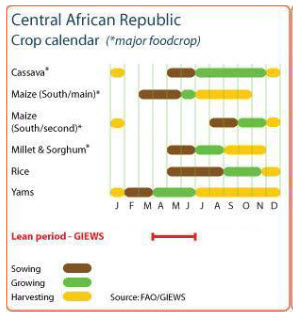