Today marks the close of the annual policy summit of the American Legislative Exchange Council (ALEC) in Washington D.C.  ALEC is known for writing model legislation with major industries and then encouraging their introduction – through their legislative partners – in statehouses nationwide.

What ALEC does during its closed-door meetings is largely a mystery.  This week, ALEC opened its doors to the Washington media – who quickly found the most important doors slamming in their faces. Not only are their meetings private, but so too are their legislative successes and failures.  Specifically, we do not know where ALEC’s model bills inspired the introduction and passage of new legislation.  In other words, ALEC could have a tremendous influence over lawmaking in the American states, or it could have none at all – we just don’t know.

The goal of this article is to begin to fill the gap in our knowledge. Given the pervasive gridlock in Congress, key legislative change is occurring predominantly in the states.  It is, then, all the more important to know who is affecting which bills are introduced in the state legislatures, and which bills pass.  Using text analysis, I find where bills based on ALEC model legislation are introduced in the statehouses during the 2011-2012 session and track their progress in the legislative process.

My findings are threefold.  First, ALEC model bills are, word-for-word, introduced in our state legislatures at a non-trivial rate.  Second, they have a good chance – better than most legislation – of being enacted into law.  Finally, the bills that pass are most often linked to controversial social and economic issues.  In the end, I argue that this is not good for ALEC, its corporate partners, or for the democratic process.

The American Legislative Exchange Council (ALEC) is a national policy organization that “provides a constructive forum for state legislators and private sector leaders to discuss and exchange practical, state-level public policy issues.” (ALEC website). ALEC members, including state legislators and corporate representatives, meet in task forces on specific issue areas (i.e., environment and energy, worker’s rights, etc.) and collaborate to write model legislation. Once the task force completes a model bill it is approved by the ALEC membership and governing board.  Once bills clear those hurdles, they become official ALEC “model policies,” which are disseminated to state legislators.

ALEC is notoriously secretive about the process by which members draft and approve model legislation. A recent Washington Post article by Dana Milbank detailed the closed-door policy at ALEC’s annual policy summit.  My own attempts to contact ALEC staff in order to understand the model bill drafting process were unsuccessful.

ALEC does list on its website all official ALEC policies (though it does not say – and representatives claim not to have collected – information on where those policies have been introduced in the states).  However, there is reason to believe that the list is incomplete. The ALEC board reviews the status of every piece of model legislation every five years, and adds and removes model bills from the website periodically.  It is not surprising, then, that the Castle Doctrine (a.k.a. Stand Your Ground) was removed from the ALEC website following the public scrutiny that arose during the Trayvon Martin trial.

Thus, obtaining a complete list of ALEC model bills and their rates of introduction and success in the U.S. statehouses requires a nuanced data collection strategy.

As discussed in the previous section, ALEC’s public list of model bills is not complete – and may include some of their most controversial and influential bills.  Rather than relying on the organization’s own list, I turned to a third party website: ALEC Exposed.  ALEC Exposed, a subsidiary of PR Watch, tracks all ALEC activity and keeps a list of the most significant ALEC model legislation approved between 2010 and 2013.  From the ALEC Exposed database, I collected information on the 169 model bills that they tag as most significant, covering each of the nine ALEC task force areas.

Using the text from those169 model bills, I used Boolean string searches in LEXIS to find bills with the same language that were introduced in the 2011-2012 legislative session. In total, I recovered 132 bills.  I then coded a variety of features of those bills including their state and chamber of origin, sponsors’ party identification and connections to ALEC, and legislative history.

During the 2011-2012 legislative session, 132 bills based on ALEC models were introduced in the states.  Democrats sponsored nearly 10% of those bills, while Republicans sponsored more than 90%.  Nearly two-thirds of those bills were introduced in state lower chambers, while only 34% were introduced in upper chambers.  Of those legislators who sponsored ALEC model legislation, 57% can be explicitly connected to ALEC.  However, that does not necessarily preclude the other legislators from having ALEC ties; ALEC does not disclose the names of their legislative members, so this figure is based primarily on information from leaked documents.

ALEC model language appeared in bills in 34 states (see Figure 1).  Those bills were most common in West Virginia, where legislators introduced 10 bills based on ALEC model legislation.  Both the Oklahoma and Mississippi legislatures considered nine ALEC bills, Arizona eight, and Kansas and Montana saw seven apiece. 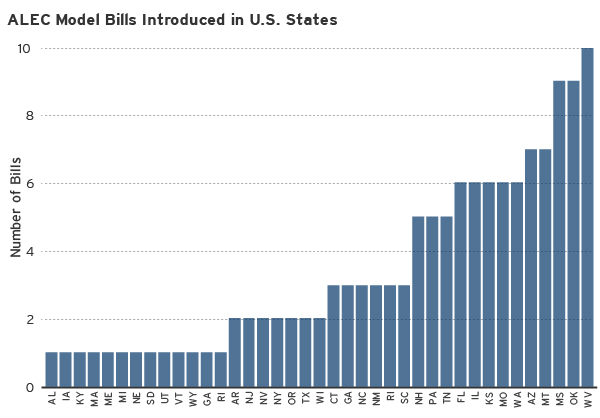 One feature that separates ALEC from other lobbying ventures is that it partners with corporations whose interests span the space of conservative issues.  This is reflected in the fact that legislation introduced based on ALEC models covers a variety of seemingly-unrelated subjects (see Figure 2). 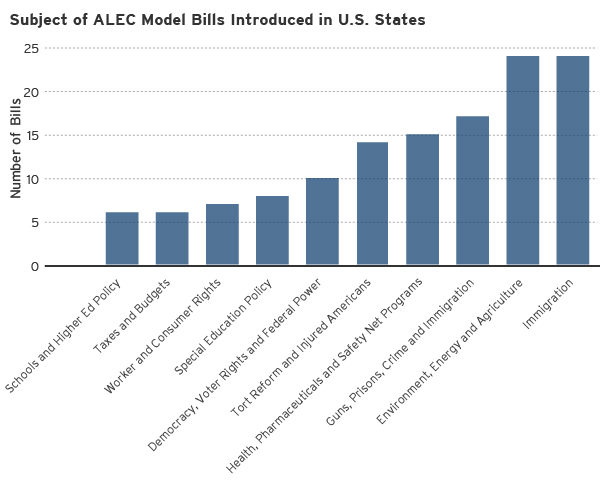 Most common were bills pertaining to immigration and the environment, followed by those relating to guns and crime.  The now-infamous Castle Doctrine Act was introduced in nine chambers and was, thus, one of the more common pieces of ALEC legislation to appear in the statehouses.  The five most common ALEC model bills introduced in the state legislatures include:

Of the 132 ALEC model bills introduced, 12 were enacted.  One additional bill passed the New Hampshire legislature only to be vetoed by the governor.  Now, a success rate of 9% may not seem high upon first glance.  However, consider the fact that, in the 112th session of the U.S. Congress, less than 2% of introduced bills passed.  That means that bills based on ALEC policies have a survival rate nearly 5 times that of the average bill in Congress.

Table 2 summarizes the ALEC policies that were passed in the 2011-2012 session.  Republicans sponsored all of the enacted bills, and 7 of those sponsors have explicit ties to ALEC.  Two states – Pennsylvania and Oklahoma – passed the Castle Doctrine.  Though the modal ALEC bill introduced in the states was the No Sanctuary Cities for Illegal Immigrants Act, only Alabama passed it.

In the midst of this success, recent controversy over particular ALEC-inspired bills – such as  the Castle Doctrine Act (a.k.a. Stand your Ground) – has caused the organization to come under increased scrutiny from journalists, transparency groups, and voters. As a result, almost 400 legislators and 60 corporations have cut ties with ALEC in the last two years, with some now publicly repudiating the organization’s methods.

Many of ALEC’s prominent (former) corporate partners, such as Wal-Mart, General Electric, and McDonald’s, were almost certainly displeased with the negative publicity and media criticism sparked by ALEC’s foray into hot-button issues like gun control.  That involvement damages ALEC’s reputation, hindering their typical (corporate-friendly) efforts surrounding manufacturing regulations, court procedures, and environmental laws.  ALEC’s corporate partners are paying to influence legislators over those issues, which they want introduced and passed quickly and quietly.  Dirtying its hands with social issues undermines ALEC’s ability to exercise influence over fiscal ones.

This has broader implications for how we think about lobbying.  Consolidation of lobbying groups into broader organizations of legislators and corporations increases their reach but also creates significant hazards. Attempting to tie together such a wide range of interests undermines the ability of the umbrella organization to achieve any of its objectives.  The bigger you get, the more likely it all is to fall apart.  ALEC’s Napoleonic reach may turn out to be its undoing.

Editor’s Note: The author would like to thank Grace Wallack and Brian Boessenecker for their research assistance on this piece.