Natural disasters are like snowflakes – while there are often many similarities between them, no two are alike. And yet in reviewing major disasters in 2012, we were struck by the fact that several of the biggest disasters last year were preceded in 2011 by similar events. In 2012 another destructive storm wreaked havoc in the southern Philippines, following a devastating storm in 2011; the United States’ east coast – including New York City – was hit by the second devastating storm in a row. For Pakistan, it was the third year in which millions were affected by floods.

In this chapter, we take a closer look at some of the parallels between those disasters, particularly to see if governments and humanitarian actors have learned lessons from one year to the next. With Typhoon Bopha/Pablo (Philippines) being the deadliest disaster in 2012 and Hurricane Sandy the costliest and with the Pakistan floods affecting among the largest number of people, these disasters represent an important cross-section of disasters occurring in 2012. In addition to discussing recurring disasters, this chapter also provides an overview of disasters occurring in the course of the year and analyzes trends in humanitarian funding. 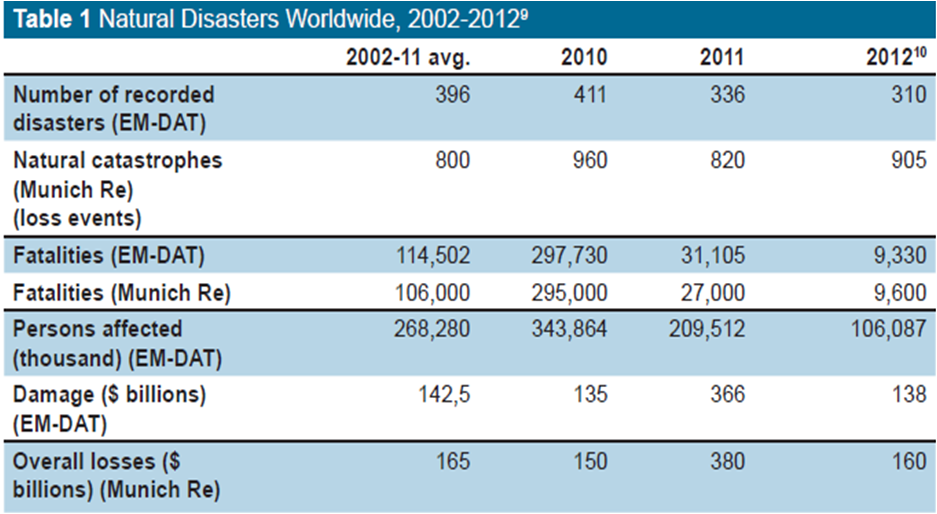 Climate adaptation and the great reset for Africa

The path forward for education and climate action

Climate, violence, and Honduran migration to the United States