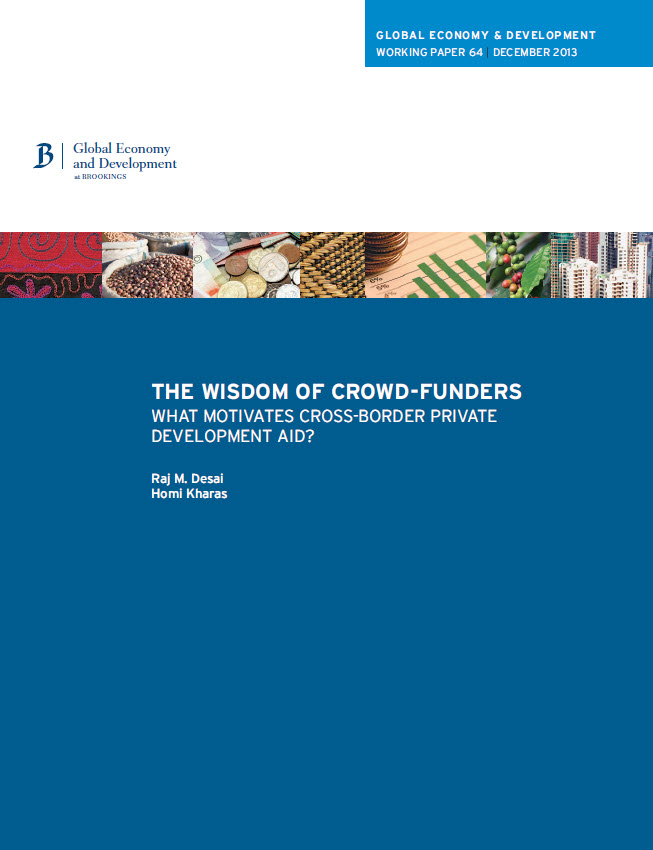 In recent years, the proliferation of private development aid has been facilitated by peer-to-peer (or “crowd-funding”) practices. As with the broader “crowd-sourcing” phenomenon which solicits information from large numbers of individuals for various entrepreneurial activities, crowd-funding platforms bundle large numbers of small, individual contributions for investment, grants or loans. The bundling of funds is generally done through internet-based social networks. From the United States, internet-based companies such as Global Giving, Kiva, Wokai and Zidisha have channeled millions of dollars to individuals and partner organizations in developing countries.

Despite the tremendous growth in private development assistance of all kinds — from mega-charities to “micro-philanthropy” — very little is known about the allocation and selectivity of private aid. Compared to official aid, private aid — whoever provides it — is obviously more sensitive to the preferences of philanthropic-minded individuals who determine allocations across countries and, within countries, across sectors, projects and individuals. More importantly, crowd-funding philanthropy affords an opportunity to test a central premise behind arguments for expanded private aid — namely, that private aid avoids the political and strategic considerations that influence bilateral ODA allocation, and better matches recipient need with individual donor preferences.

Information on the allocation of crowd-funded private aid, and on the choices made by private citizens who contribute to international causes, can potentially reveal the implicit preferences of philanthropic citizens in a way that cannot be captured by looking at official aid allocations. There are several possibilities: that crowd-funders behave in accordance with rational-choice theories of charity, allocating money based on
individual-specific preferences; that crowd-funders behave like official donors, responding to a combination of recipient-country need, expected performance and commercial and/or strategic value; or that crowd-funders make allocative decisions on the basis of group behavior and norms.

This article presents new data on crowd-funded development assistance, which allows us to analyze the motivations behind individual contributors. We analyze data from Kiva, the largest provider of crowd-funded microcredit to developing nations.

This article presents new data on crowd-funded development assistance, which allows us to analyze the motivations behind individual contributors. We analyze data from Kiva, the largest provider of crowd-funded microcredit to developing nations. We develop a model to show how the allocation of aid through crowd-funding websites reflects the preferences of philanthropically-minded citizens regarding development assistance, and then use data on Kiva’s transactions to examine empirically the factors that affect the supply of private development aid, as well as to determine the extent to which private preferences differ from official aid agency allocative mechanisms.

We argue that the rate at which individual microloan requests are funded by Kiva’s community of lenders, once they are posted on the Kiva website, can be interpreted as a proxy for crowd-funder preferences regarding private development assistance. We can therefore use survival analysis of the time to fund each project to estimate the significance of a number of covariates.