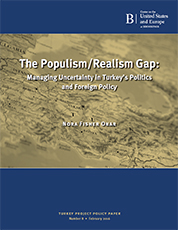 In recent years, “uncertain” increasingly seems to be the adjective of choice to describe the trajectory of Turkish politics. Moreover, it is uncertainty that prevails at the juncture of Turkish populism and realism, and domestic and foreign policy. A populist president, Recep Tayyip Erdoğan continues to appeal to anti-Western sentiments at home, while geopolitical realities require that Turkey pivots to the West in its foreign policy. In the 8th Turkey Project Policy Paper, “The populism/realism gap: Managing uncertainty in Turkey’s politics and foreign policy,” Nora Fisher Onar traces the development of AKP’s populism: how and why it emerged, how it has evolved, and the impact it has made over the past decade, both for Turkey and its international relations.

In the paper, Fisher Onar breaks down the progression of the ruling AKP government into three periods. The first period stretches between 2002 and 2008, when the AKP first came to power and combined its Islamist platform with a modernizing Western, liberal orientation. A Neo-Ottoman footing punctuated the second period, from 2009 to 2012, when the leadership aimed to strengthen historical and religious connections with the countries in the post-Ottoman space and to re-establish Turkey as the region’s de-facto order-setter. From 2013 onwards, which Fisher Onar marks as the third phase, the AKP’s model of leadership started to lose its traction amid growing regional insecurity. This is the point where a populist domestic policy collides with the geopolitical realities.

Fisher Onar argues that, in hindsight, the Arab Spring turned the tide against the AKP. Erdoğan’s support for the Muslim Brotherhood set off a series of international relations landmines, particularly in Egypt and Syria, where their leaders did not share Erdoğan’s enthusiasm for the Brotherhood’s mode of governance. As things currently stand, Turkey is in the cross-hairs of a number of former allies in the Middle East, Balkans, and the Caucasus. At home, a populist pursuit of regional leadership is increasingly damaging Turkey’s economy and democratic institutions. There is much tension with the Alevi and the Kurdish community—not to mention with a considerable percentage of the population that resents, and fears, Erdoğan’s growing authoritarianism and ambitions for an executive presidency.

Finland, Sweden, and the future of NATO

Belarus has good reason for concern over Putin’s nuclear intimidation

Scotland and the future of European energy security