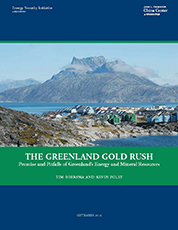 As the Arctic ice continues to melt due to global warming, Greenland’s mineral and energy resources – including iron ore, lead, zinc, diamonds, gold, rare earth elements, uranium and oil – are becoming more accessible. The political establishment in Greenland has made natural resource extraction a central part of its plans to become economically self-sufficient, and ultimately politically independent, from the Kingdom of Denmark. This will be no easy task, and it is made more difficult by Greenland’s rapidly aging population.

This report assesses the promises and pitfalls of resource extraction in Greenland, and puts the ambitions of the current Greenland government to the test.

The first years of the system of the autonomous self-rule government, which became effective in June 2009 after a referendum held the previous year, coincided with sky-rocketing global commodity prices. These prices were driven to a significant extent by surging demand for commodities from China and from economic stimulus packages put in place after the global financial crisis. By now, prices have receded for most commodities, and we believe that because of the slowdown in investments in new mining activities, it is less certain that Greenland will be able to get major mining projects off the ground on the ambitious schedule that it announced in its mineral and energy resource strategy in 2014. We do believe however that eventually large-scale mining will take place in Greenland.

Figure: Areas of Hydrocarbon Development, as Licensed by Greenland 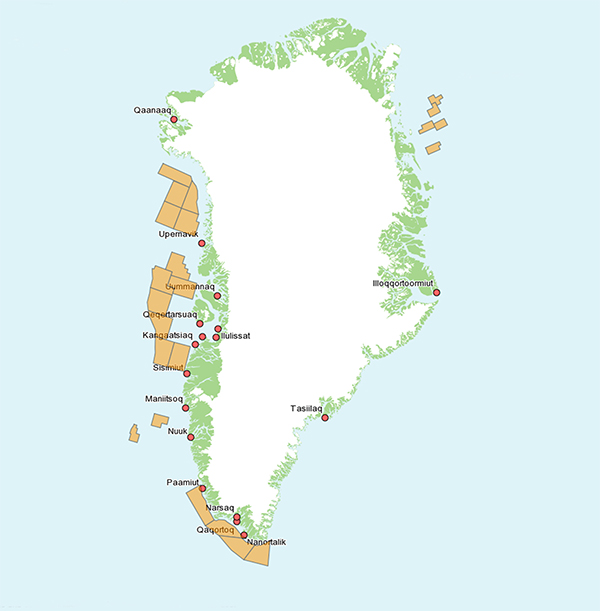 • Commercial oil production will not occur for at least another decade.

Global market developments are even less favorable in the short term for commercial production of offshore oil. The conditions in Greenland are very harsh and technically demanding, and the costs of extraction high. This, combined with the observation that large amounts of unconventional oil are currently being produced in North America, and in due time likely elsewhere, leads us to believe that commercial oil production will take at least another decade, if not more. This is similar to expectations for other parts of the Arctic.

• Greenland has taken a cautious and responsible approach to regulation, but more challenges lie ahead.

The Greenland government has been making progress in preparing for large-scale mining projects, with some success. The government has been appropriately cautious in developing regulatory structures and building environmental safeguards, while at the same time trying to create an attractive investment climate. A training school in Sisimiut has established itself as an effective training ground for young engineers; six engineers trained in Sisiniut contributed to Greenland’s most recent exploratory oil well, which was drilled by Cairn Energy in 2011. The successful operation of the gold mine in Nalunaq in recent years and the expected opening of a ruby mine in 2015 are indicators that the Greenland government is on the right track. At the same time, large-scale mining projects are new to the country and several regulatory and transparency issues still have to be addressed.

Greenland is widely believed to hold excellent potential for a host of natural resources, including zinc, lead, gold, iron ore, heavy and light rare earth elements, copper and oil. Considering that only a small fraction of this massive island has been properly explored, in the coming years more data gathering and analysis would be helpful to assess the full potential of Greenland.

• Efforts to attract Chinese investment in mining projects in Greenland have so far yielded little interest and no significant investment.

Though Chinese companies have featured prominently in public debates in both Greenland, Denmark and beyond, in fact we found little evidence to support the idea that Chinese firms are eager to invest in Greenland, despite substantial efforts by the Greenland administration to attract them. Chinese investment in iron ore, for example, has slowed in recent years after a series of ill-advised investments in Western Australia have proved unprofitable and have become a burden on the domestic iron and steel industry. In addition, while there has been widespread concern in Greenland about the potential influx of several thousands of Chinese workers to construct an iron ore mine, we note that for a population the size of Greenland, which has only 56,000 people, the sudden arrival of several thousand workers should always be a cause of concern, regardless where these workers come from. Nevertheless, this is a reality Greenland will have to face if it is to develop large scale mines.

• Greenland can benefit from European support though it may not be the silver bullet in Europe’s quest for raw materials.

In its quest to secure alternative resource suppliers, the European Union has eyed Greenland with great interest. In recent years European policy makers have developed raw materials policies in which Greenland features prominently. Though it seems too early to draw definitive conclusions about these policies, it is our impression that Greenland can benefit from European support, as its fishing industries have for many years, and that vice-versa Greenland could someday become an alternative supplier of some commodities to Europe. The case of rare earth elements though, which has made headlines in recent years, is at least partly based on misconceptions of China’s interventions in the global rare earth supply chain, and in particular on an apparently incorrect understanding in many western capitals that China has shown a willingness to cut off its supply of rare earth elements during times of conflict. There are also concerns about China’s dominance in the global supply chain. Our analysis suggests that Chinese dominance in this market has little to do with physical resource availability, but rather with processing capacity, knowledge that was transferred from the United States in the 1970s at a time when rare earth prices were falling and environmental concerns in the United States were on the rise. We see no indication that European decision-makers want to rebuild the entire supply chain for rare earth elements in Europe, and so these resources, even if produced in Greenland, would still have to be processed outside the EU. This puts European policy efforts in perspective, though admittedly there is much value in large parts of existing policies, including increased recycling, substitution, demand reduction and research and development.