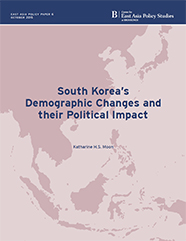 South Korean society is in the throes of demographic and socio-political change, which will challenge the adaptability and resilience of its young democracy.

The growing influx of immigrants into the Republic of Korea (ROK) creates a unique opportunity for the South Korean society to deepen the meaning and practice of democracy through the social and political integration of these “New Koreans.” Although official recognition of these newcomers includes rights to citizenship under specific circumstances and substantial support for acculturation programs, discrimination by the larger society, economic insecurity, and sociocultural marginalization surround their daily lives. The ROK is in a transitional moment from what Anthony Smith describes as the “ethnic-genealogical” model of national identity to the “civic-territorial” model.[1]

This paper addresses the political implications of a South Korea that is increasingly constituted by ethnically different individuals from multiple countries who speak different languages and practice unfamiliar customs. It emphasizes that South Korean democracy, born of relative homogeneity in the late 20th century, will have to accommodate growing heterogeneity in the 21st century. Accommodation includes political representation of the New Koreans in government, elected office, civil society organizations, in addition to educational access and re-education of the Korean public regarding national identity and interests. The paper also discusses how demographic heterogeneity can change foreign relations as newcomers mediate economic, diplomatic, and people-to-people ties with their countries and cultures of origin. Additionally, the increasing presence of different and mixed ethnicities invites examination of the long-held basis of peninsular unification, namely, “pure bloodline,” and the exploration of an alternative civic and democratic rationale for unification to match the demographic dynamism.

China’s “digital natives”: How the post-’90s generation is transforming the country