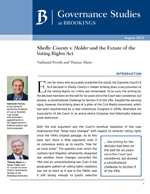 Even for many who accurately predicted the result, the Supreme Court’s 5 to 4 decision in Shelby County v. Holder invalidating the preclearance formula in Section 4, a key provision of the Voting Rights Act (VRA), was remarkable. Despite the warning signs, the striking down of a pillar of the Civil Rights movement, which had been reauthorized by a near-unanimous Congress in 2006, illustrated the muscularity of the Court in an arena where Congress had historically enjoyed great deference.

To discuss the implications of the Court’s decision, the Brookings Institution assembled leading scholars and practitioners of election law on July 1, 2013, less than a week after the Court handed down its decision. The group included lawyers involved in the case, minority voting rights advocates, election lawyers who have represented both Democrats and Republicans, and academics specializing in voting rights and election law.  In this policy brief, Nathaniel Persily of Stanford Law School and Thomas Mann of Brookings, who moderated the July 1 conference, discuss the Court’s decision, review the day’s proceedings and summarize possible responses raised during the conference.

View a webcast of the event, as well as a transcript and list of conference participants »

Trump’s judicial campaign to upend the 2020 election: A failure, but not a wipe-out