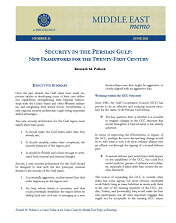 In the wake of the U.S. military departure from Iraq and in the midst of Iran’s continued defiance of the international community over its nuclear program, is a new security arrangement for the Gulf in order? If so, is the Gulf Cooperation Council (GCC) capable of such a task, or should other institutions be considered?

Pollack analyzes security arrangements in other parts of the world and focuses on two options:  expanding the GCC and turning it into a formal military alliance and creating an arrangement modeled on the Commission on Security and Cooperation in Europe. In weighing each option, Pollack finds that the latter can better furnish a path toward peace and security.