A Brookings India roundtable on “Future of Coal – 2020” invited experts to discuss future coal demand for the country, and also to share preliminary findings of our ongoing research on the challenges in ensuring sufficient coal supply contingent with the demand.

Summary: The three key preliminary findings from our research are: 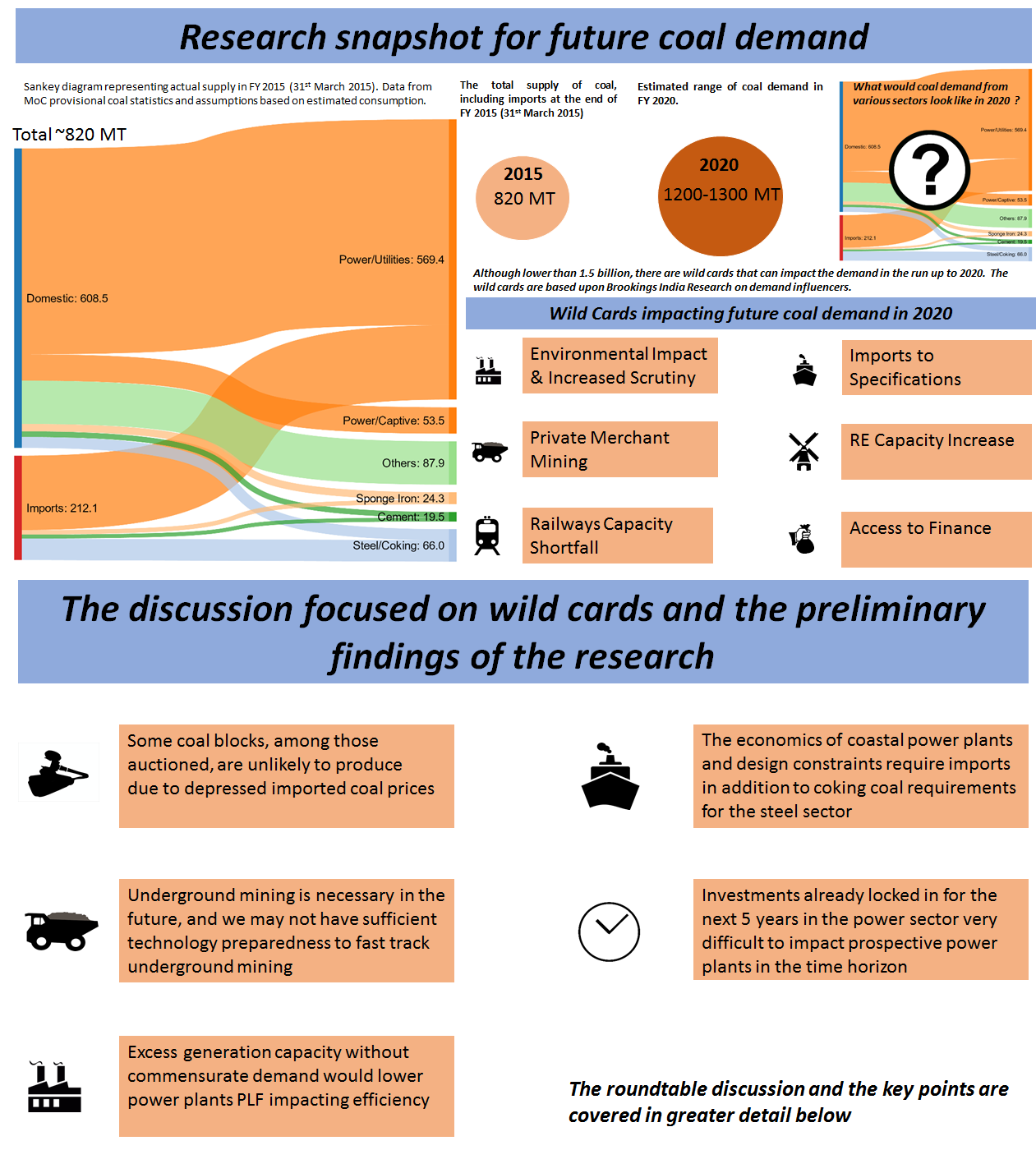 Background:  Brookings India hosted a roundtable on the future demand of coal in India on 11 February 2016.  Joining the discussion were leading scholars, practitioners, and government officers (past and present). The discussion was anchored on an ongoing study at Brookings India on the demand of coal, which was presented and discussed. This roundtable focused on both a limited preview of results of the research among select group of experts as well as a broader discussion on policy issues and implications of coal demand (held under Chatham House Rules).

The biggest consumer of coal in the country is the power sector.  Coal powers 61% of the installed capacity and more than 83% of electricity generated — as of 31 March 2015 (CEA 2015). Our research addresses this sector in detail (including plant-level analysis) and also other (comparatively) smaller sectors like steel, cement, fertilizer and sponge iron.

On the thermal power generation growth, there is uncertainty about the actual thermal capacity expected online by 2020. Growth of plant capacity (a supply of plants analysis) is contingent on sensitivity against the contributing hurdles (statutory clearances, land and environmental approvals, funding, etc). On the other hand, electrification of new areas would inevitably lead to increase in demand (power demand side analysis). The translation of the additional electricity demand into installed capacity would require attributing value to additional consumption and to variables like plant efficiency values (33%-38%), Plant Load Factors (PLFs, 64.46% was the 2014-15 thermal average) and the cost of generation itself. Newer plants should typically have higher system efficiency values and would need to be run at high PLFs to ensure returns. Alternately, the recent downtrend in aggregate PLFs in India may increase the marginal cost of generation, thereby either increasing the price of power in the hands of the consumers or significant losses for the Generators with heavily indebted distribution companies unable to procure power. The current pattern followed by PLFs assumes significance in light of reducing generation costs in the renewable energy (RE) space and the proposal to increase the country’s RE capacity.

The total coal demand has been calculated taking into account the requirements of the power sector and the non-power sector. Our initial analysis throws up different numbers of coal requirement from the power sector demand side and plant capacity side. The total coal requirement in 2020 is in the estimated range of 1200-1300 million tonnes, and well below 1.5 billion MT.  This includes imports, which is the first of several wild cards, many of which could lower the demand for domestic coal.

RE capacity expectations and finance: RE power is not a base load, it is time-of-day sensitive and cannot be stored (at this moment, future innovation discounted), which makes it more ephemeral than thermal electricity. However, the near-zero variable cost implies a “must run” status, which could then reduce the PLF of alternate generation. Grid integration and management is a major impact area which needs adequate advance planning and grid stability.

Imports: If imports are only of high calorific value, is washed coal then an unequal substitute? Are coastal power plants constrained by design to use only imports? Non-power imports of coal are not expected to end any time soon — we do not have prime coking coal — are we then targeting an unrealistic objective of eliminating imports?

Private Mining: Private capacity mining augmentation within the specified timeframe is behind schedule, and with an unrealistic compound annual growth rate of almost 60% for this sector (to contribute 500 MT out of 1500 MT). A depressed commodity market and favourable macro situation (with low coal prices) means pressure on imports will remain. However, with lower output from the private sector, even a lower total domestic demand would still leave a residual demand on the shoulders of Coal India Limited, which would have to grow significantly.

Increasing scrutiny on environmental impact: The Indian government has put out stringent environmental conditions for upcoming thermal plants. Going forward, it is expected that there would be increased oversight and more stringent standards for pollution monitoring, imposing costs on generation companies and also impacting coal quality requirements. This can perhaps increase use of washed coal or there could be an import substitution of domestic coal. Ministry of Environment, Forest and Climate Change would probably move for the older public sector – state/central to either shape-up or shut down. This would allow weak plants to either be improved or be removed from the pipeline, which will help in improving PLF and capacities coming online and demand growth balance could be maintained.

Imports: Domestic coal availability has eased considerably with record high stockpiling of coal at pit head and plant head. Simultaneously, railways does not report any capacity bottlenecks on transportation. However, the imports for this year are still expected to increase. Does it mean imports are being preferred over domestic coal or has there been a bottoming of demand? Or are there other reasons for imports (see below)?

The macro environment also raises questions on the recently auctioned mines from coming into production in light of depressed commodity prices which have made it cost effective to import than mine locally. This will in all likelihood reduce the foot off the accelerator if not apply brakes on additional captive capacity coming online and also negatively impact further auctioning of mines for end-use plants, spilling into lower price realisation from domestic coal which is suffering from over supply at the moment. It is quite possible there could be a price cut in CIL coal. This implies the private sector targets for 500 million tonne of coal may remain a non-starter.

The assumptions on the non-power sector coal imports need to be adjusted for the future based on parity prices of imported coal and also on import substitution of finished products in each of these sectors.

5-year investment already locked in the sector: For the near future the demand sectors have already been locked into consumption trends that are determined by technology of the upcoming capacity and appropriate coal quality. Any changes in these parameters are not easy hence, impervious to any policy changes at this stage however, future plants ~10 years would be more amenable to change considering no sunk costs and greater flexibility in commissioning new capacity. Also, reduction in future PLFs is a scenario, whereas newer plants could displace older plants as they are more efficient and less polluting. Should the research be looking at a longer lead time for capacity assessment?  Choice of supercritical power plants in the future can also impact not just efficiency and tons requirement but also type of coal (coal grade, coal quality/variance, etc.), all of which point to either imports or washed coal.

Technical Parameters for power plants: If we look at the PLFs over a longer time period, then in the early 2000s they went up from 60% and peaked to 70% and then started to decline. After 2003 till about 2007, capacity growth has been humungous. With improved coal availability, the PLFs could actually be improved in the range of 73% if demand increases and older plants are taken offline to allow newer and more efficient plants to take over.

Coal mining technology constraints: At present 8% of coal production is through underground mining technology. If CIL has to produce even 900 MT by 2020, it would need to plan for an increased share of production from underground mining. As shallow resources deplete, coal would be mined from greater depths, and it would pose a challenge in the form of technical capabilities and a longer development time period. Also, the costs of underground mining would be substantially higher and price of such coal will need subsidizing to compete with imported coal.

Underground mining infrastructure takes longer to develop (around six-seven years) because of which an open cast mining or contractual mining is the only eventuality to improve production drastically in a shorter time frame.

Assessment of auctioned coal blocks (Captives): Some of the captive blocks that have been allotted are unlikely to come into production by 2020 because of the high costs of mining and cheaper alternatives available (imports). Also, the financial sector is now in a state of distress with a huge pile up of non-performing assets in the public sector banks. The lack of liquidity (delay/default on payments by utilities) show up compounded in the lower PLFs. Also, Discoms are not buying, whereas captives are buying power (on the power exchange) instead of producing their own as it is cheaper.

With inputs from Anurag Pal Sehgal and Abhishek Mishra.

Like other products of the Brookings Institution India Center, this report is intended to contribute to discussion and stimulate debate on important issues. The views are those of the authors.

Delhi, the world’s most air polluted capital fights back

Vikram Singh Mehta
Monday, May 18, 2020
Get daily updates from Brookings