In 1948, the world’s nations came together and agreed that “everyone has a right to education,” boys and girls and rich and poor alike. This vision set forth in the Universal Declaration of Human Rights has been reinforced over the decades and today the girls who still fight to be educated are not cases for charity but actively pursuing what is rightfully theirs. In recent years, girls’ education has also received attention because, in the words of the United Nations, “education is not only a right but a passport to human development.” Evidence has been mounting on the pivotal role that educating a girl or a woman plays in improving health, social, and economic outcomes, not only for herself but her children, family, and community. Educating girls helps improve health: one study published in The Lancet, the world’s leading medical journal, found that increasing girls’ education was responsible for more than half of the reduction in child mortality between 1970 and 2009. The economic benefits are clear: former chief economist at the World Bank and United States Secretary of the Treasury Lawrence Summers concluded that girls’ education “may well be the highest-return investment available in the developing world” due to the benefits women, their families and societies reap. And because women make up a large share of the world’s farmers, improvements in girls’ education also lead to increased agricultural output and productivity.

Given the importance of girls’ education, for girls’ own dignity and rights and for a broad sweep of development outcomes, it is no surprise that global agendas have focused heavily on it. For more than two decades, girls’ education has been recognized as a global priority and incorporated into development targets, which has rallied governments, nongovernmental organizations (NGOs), foundations and international organizations. From the 1990 Education for All (EFA) Goals to the 1995 Fourth World Conference on Women in Beijing and to the 2000 Millennium Development Goals (MDGs), girls’ education has been a priority, particularly in international development communities. Perhaps the most influential of these has been the MDGs, which reinforce parts of the EFA goals by focusing two of their eight goals on education, namely on achieving universal primary education and achieving gender parity in both primary and secondary school.

Progress in enrolling children, especially girls, into primary school is seen by many as a development success story. Indeed there is much to celebrate. Since 1990, the number of girls in low-income countries enrolling in primary school has increased two-and-a-half times, from 23.6 million to nearly 63 million in 2012. This has translated into a large increase in the girl-boy ratio in low-income countries, from 82 to 95 girls per 100 boys in primary school. For low- and lower-middle-income countries combined, the number of girls enrolled reached over 200 million girls in 2012, an almost 80 percent increase, and globally two-thirds of countries have near-equal numbers of boys and girls enrolled at the primary level.

In 1990, in South and West Asia, there were only 74 girls enrolled in primary school for every 100 boys, but by 2012 the region had achieved equal numbers of boys and girls in school.

This progress was largely made by the leadership of developing country governments that prioritized expansion of primary schooling opportunities and by the global community’s support of governments focused on reaching the MDGs. Some of the biggest gains have been in regions struggling the most. In 1990, in South and West Asia, there were only 74 girls enrolled in primary school for every 100 boys, but by 2012 the region had achieved equal numbers of boys and girls in school. Similarly, sub-Saharan Africa, which had the lowest levels of girls in school in 1990, has experienced marked improvement, with the girl-boy ratio increasing from 83 to 92 girls per 100 boys in primary school.

The focus on getting girls into school has helped close gender gaps in relation to other factors too, such as wealth and location of residence. The fact that family income and urban or rural locality are now the most likely indicators of school enrollment is a big victory for girls’ education. The World Inequality Database on Education (WIDE) shows that in India, for example, 38 percent of girls and 25 percent of boys of primary school age were not in school in 1992. By 2005, that gap had narrowed to 24 percent of girls and 22 percent of boys. However, today the gap between the richest and poorest children’s attendance is much starker—37 percent of children from the poorest 20 percent of families versus just 11 percent of the richest 20 percent are out of school. And in many areas, girls actually outpace boys, especially at higher levels of education. In one third of countries, there are now more girls than boys enrolled in secondary school. Also, girls often do better once in school, with boys making up 75 percent of grade-repeaters in primary school. 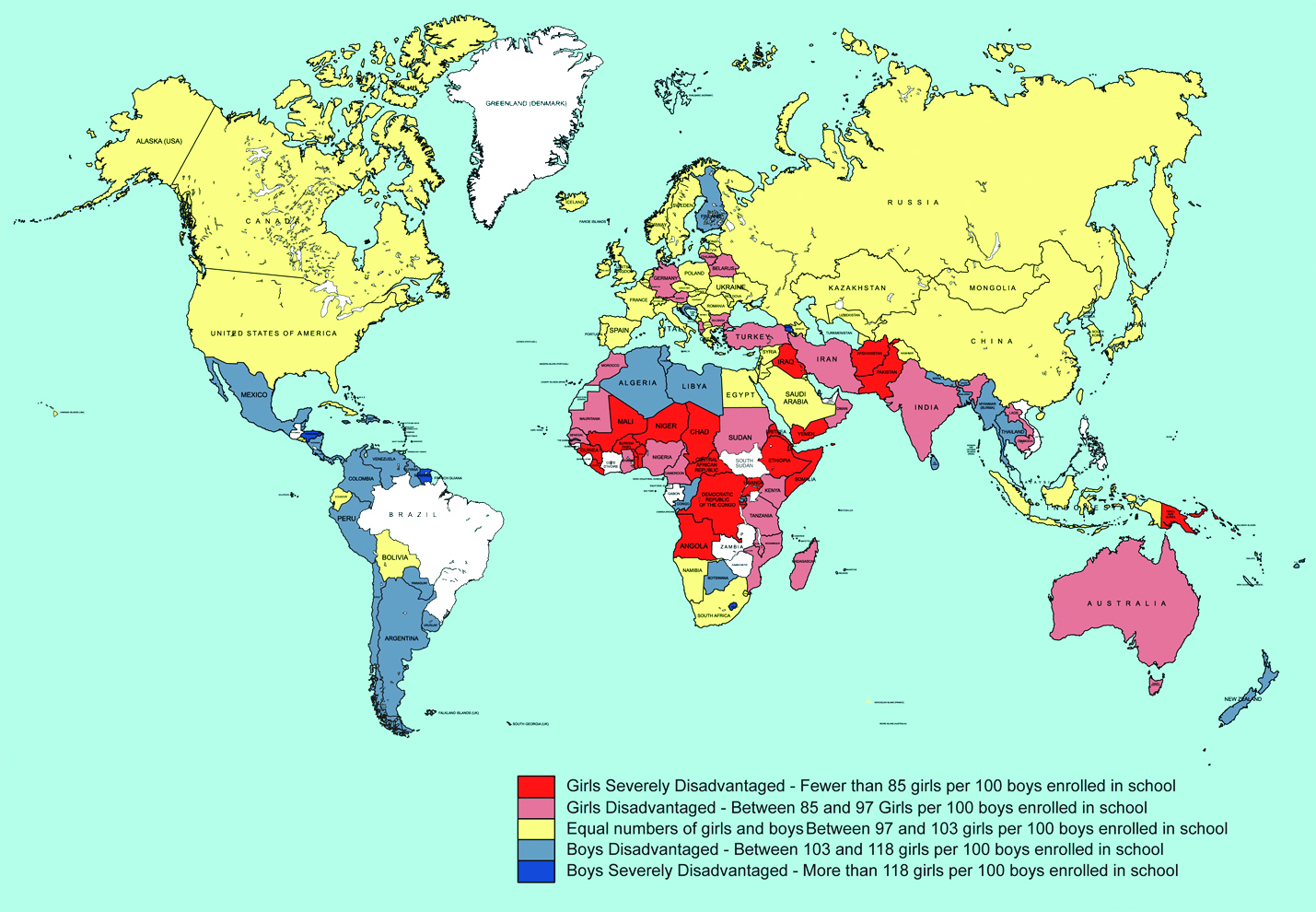