After a dozen-year standoff between Iran and the international community over the Iranian nuclear program, negotiations are underway between representatives of Iran, on the one hand, and the P5+1 countries (the United States, the United Kingdom, France, Germany, Russia and China) and the European Union, on the other, on a comprehensive agreement aimed at ensuring that an Iranian nuclear program declared to be devoted to peaceful purposes will not be turned into a program for producing nuclear weapons. 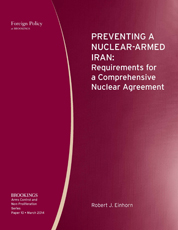 However, key differences exist on the requirements of an acceptable deal, not just among negotiators at the table but also among key players outside the negotiations. Israeli officials and a number of members of Congress are demanding the elimination of key elements of Iran’s nuclear program, and the Obama administration and its supporters counter that several of those demands are neither achievable nor necessary for a sound agreement.

In a new Brookings Arms Control and Non-Proliferation Series paper, Preventing a Nuclear-Armed Iran: Requirements for a Comprehensive Nuclear Agreement, Robert Einhorn explores the difficult issues facing negotiators as they prepare for their next round of talks, scheduled for the week of April 7, 2014. In addition to analyzing Iran’s intentions toward nuclear weapons and discussing the principal issues in the negotiations, he outlines the key requirements for an acceptable comprehensive agreement that would prevent Iran from having a rapid nuclear breakout capability and deter a future Iranian decision to build nuclear weapons.