In this new Saban Center Analysis Paper, Lawrence Rubin examines the curious case of the Islamic movement in Israel, from its origins in the early 1970s, fragmentation in the mid-1990s, to its present state. He provides an overview of this Islamic movement as a window into an under-examined subject at the intersection of Israeli-Arab and Islamist politics. 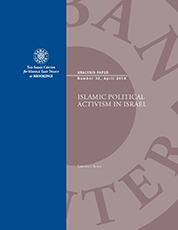 Rubin pays particular attention to the evolution of the Islamic movement by surveying its major inflection points, including its development, its split into hardline and moderate factions and its attempts at reconciliation. The paper also situates this movement within the domestic and regional environment in order to highlight both the similarities and differences between the Israeli Islamic movement and others in the region. Rubin looks at the future trajectories of the movement, including the challenges and opportunities presented by the Prawer Plan and other developments.

Finally, the paper concludes by highlighting why this movement is important for Arab-Jewish relations, the peace process and regional peace and stability—and what it means for U.S. foreign policy.