America is a rich country. But it contains lots of people surviving on incomes more common in developing countries. In this memo, we explore the consequences of being on the very bottom rung of the income ladder on families’ daily life, as well as the long-term life chances of their children.

In 2011, over 1.5 million families were living in “extreme” poverty, with $2 or less in cash income per person per day, according to a recent study by Luke Shaefer and Kathryn Edin. Many more—over six percent of the US population, including 7.1 million children— live in “deep” poverty, defined as having a household cash income under half the federal poverty threshold. In 2015, the threshold for being in deep poverty is an annual cash income of less than $5,885 for an individual, $7,965 for a single-parent with one child, or $12,125 for a married couple with two kids. For context, the median household income in the US in 2013 was nearly $52,000.

Recently, both extreme and deep poverty in the US have become more prevalent. As shown below, this holds true for most definitions of income, even those including non-cash benefits. Although there is some disagreement about these figures and their causes, many scholars suggest that the rise is a consequence of the 1996 welfare reforms. Strengthened work requirements and newly implemented time limits meant that many low-income families entered work, received higher tax credits and improved their situation. But those unable or unwilling to move from welfare to work as intended received less cash assistance from the government and became reliant on a hodgepodge of government support, such as SNAP, housing subsidies, Medicaid/CHIP.

Who are the deeply poor?

The typical person in deep poverty is US-born, young, white, and living in a family, if only because most people in the US fall into these categories. But the risk of being in deep poverty varies very significantly across demographic groups: 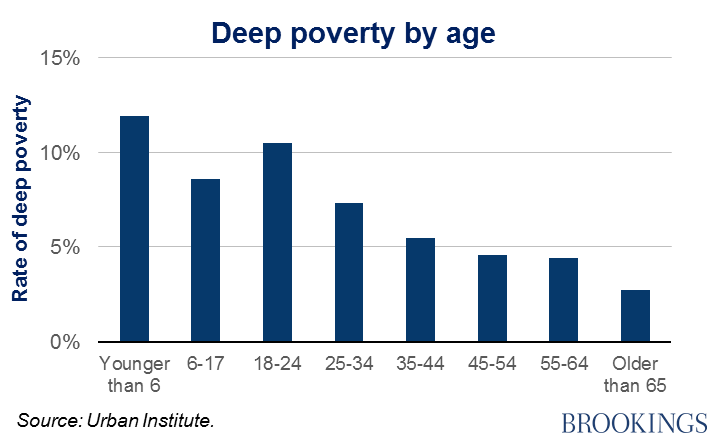 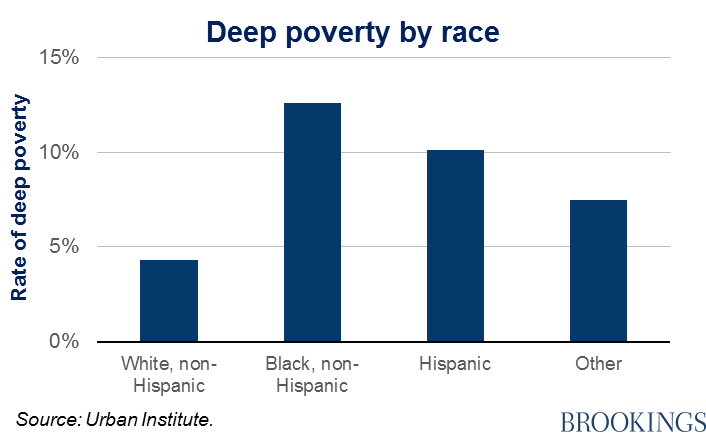 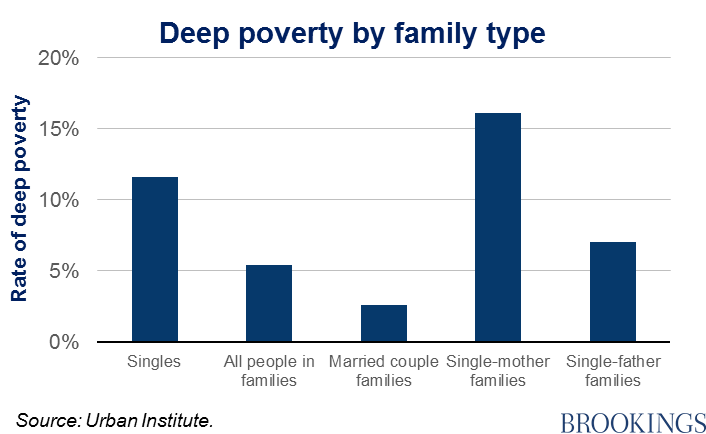 Given the lifecycle impacts of early childhood circumstances, especially for minority children, these demographic risks of deep poverty bode ill for social mobility.

The best defense against deep poverty is a paycheck. Although about 3 million of the deeply poor (aged 16 or older) work on a part-time basis, more than 10 million have no paid work at all. For some, especially those caring for children, this may be a choice, albeit a hard one. Others may simply fail to find a job; yet more may be distant from the labor market. As a recent Urban Institute report shows, many of the deeply poor suffer from “serious physical and mental health problems, disabilities, and addiction…[or] may be homeless, high school dropouts, functionally illiterate, or have criminal records.” 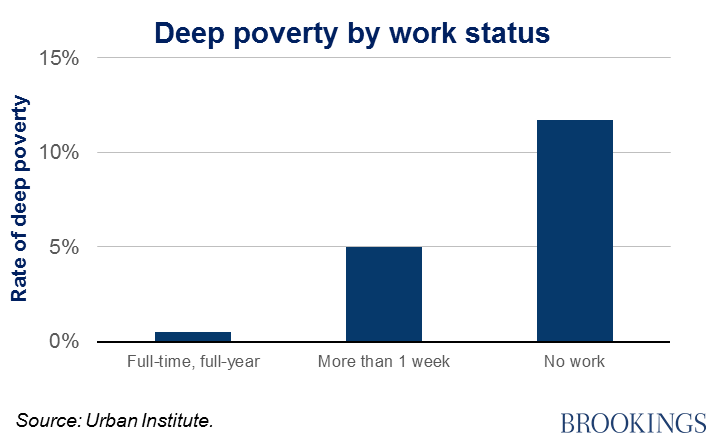 Government support for the deeply poor

For the minority of those who are both in work and in deep poverty, the following tax credits are an important source of income: the Earned Income Tax Credit (EITC), Child Tax Credit (CTC), and Additional Child Tax Credit (ACTC). The EITC phases in with the first dollar of earnings, and the CTC and ACTC phase in after $3,000 in earnings. A married couple with two children and earnings of $10,000 are eligible for a $5,060 cash refund ($4,010 EITC and $1,050 ACTC), which boosts their disposable income by just over 50 percent.

Those without earnings must rely entirely on familial and government support. Typically, those in deep poverty are eligible for family-friendly tax credits and direct assistance with buying food, shelter, and health care—all programs without strict work requirements unlike TANF.

In-kind transfers do not lift incomes, but are a vitally important source of support for those in deep poverty, especially in terms of food, housing and health care

Table 1 shows the average pre- and post-tax 2013 income levels for these three groups, which includes cash transfers. As expected there are very wide gaps:

For the purposes of defining the three groups, only cash income (i.e., wage and salary income plus cash benefits) was included; however, we also include income from food stamps and other electronic benefits in the average incomes shown here. Since there is good evidence that CEX income measures under-state receipts of government transfers, we adjust accordingly based on 2008 estimates by Meyer, Mok, and Sullivan. These adjusted estimates are shown below—deeply poor households have less than half the income of poor households and about one-eighth of the income of middle-tier households. 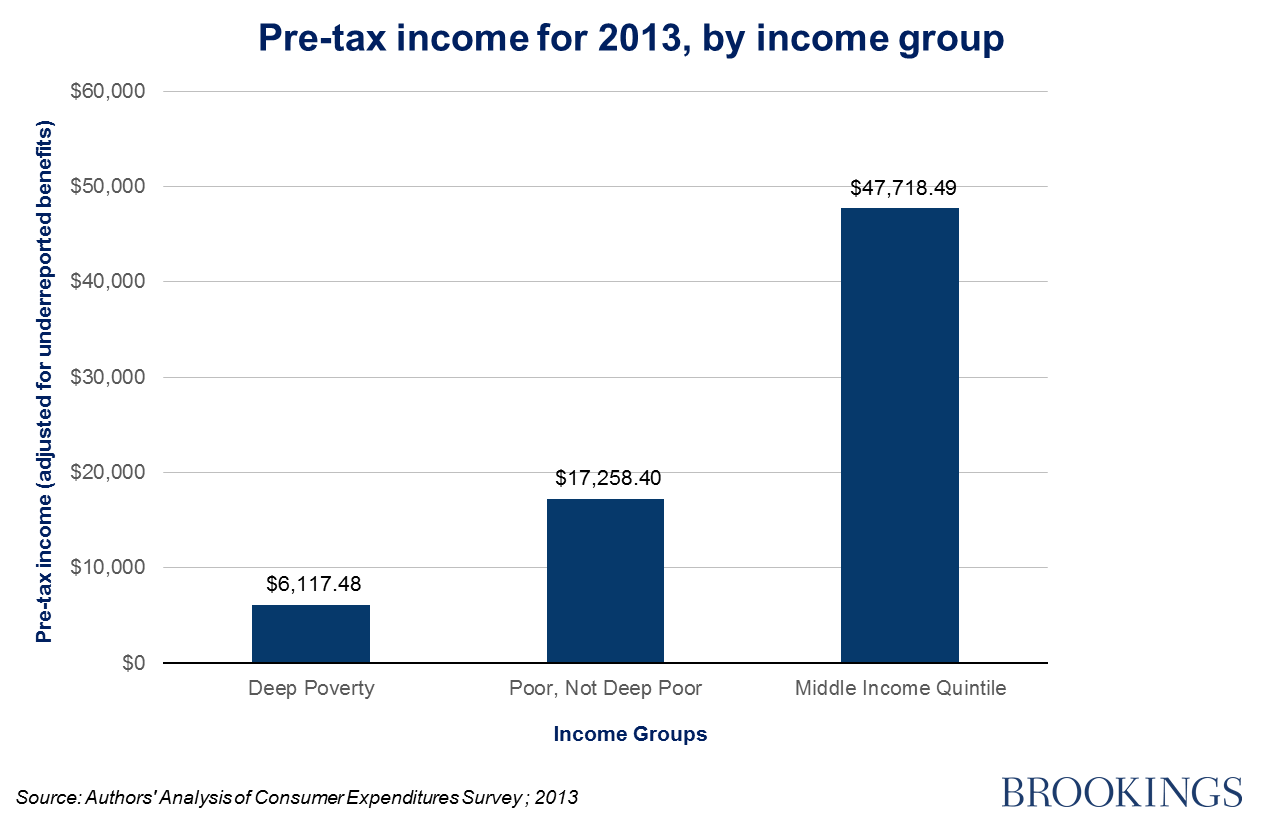 Spending, however, is a different story. Total expenditures reported by the deeply poor are identical to those of the poor. Overall figures along with categories of spending are as follows:

The necessities of life account for the most spending for all three groups, as a proportion of income. Food, housing, and transportation make up about three-quarters of spending for all groups (76 percent for the deep poor, 74 percent for the poor, and 70 percent for the middle class). Of course, the absolute spending level of middle income households dwarfs that of their less fortunate peers. While the deeply poor spend on average $3,138 per year on food or about $260 a month, the middle income group spends $4,559 per year or about $380 a month. Middle income households spend 50 percent more on housing than the deeply poor and almost 120 percent more on transportation. And these higher spending levels continue across all spending types, with the exception of education: 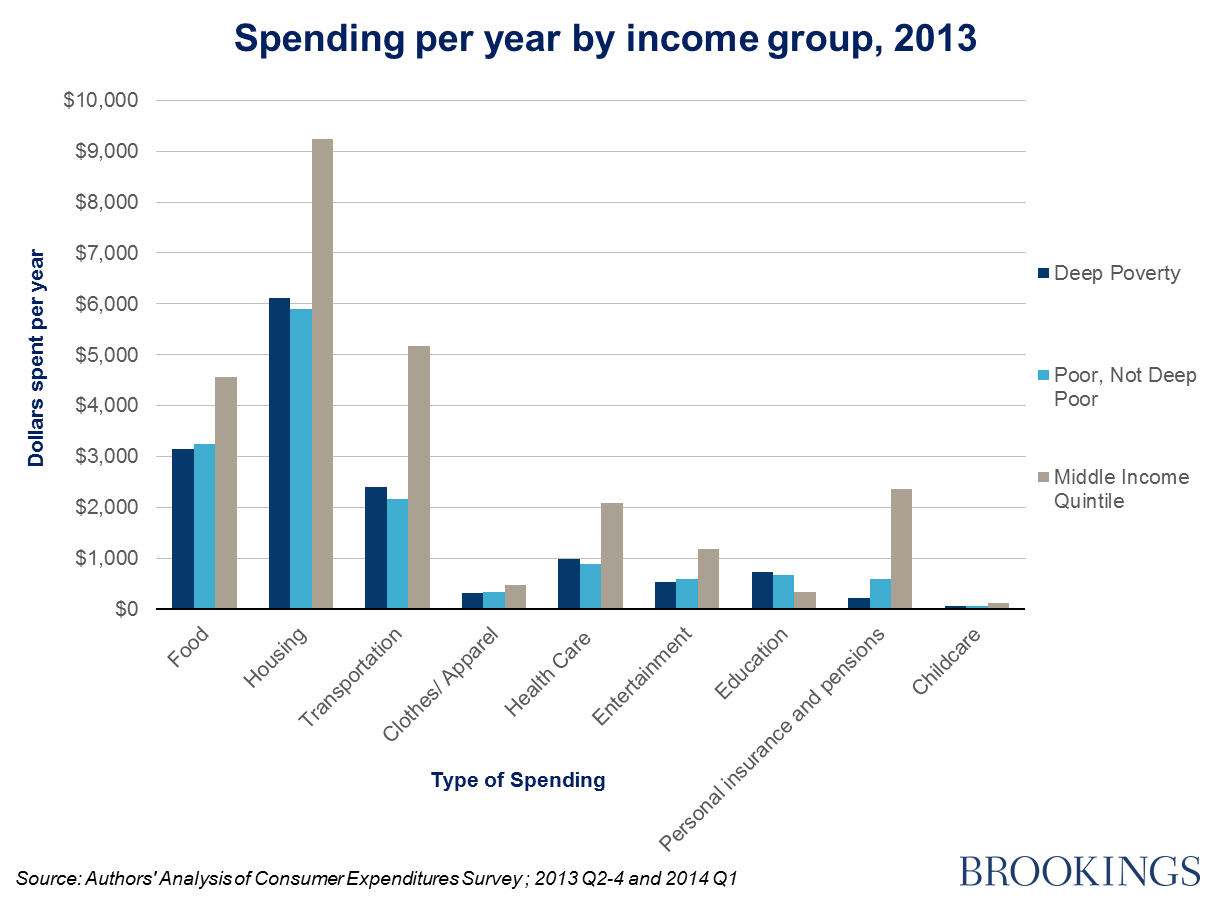 Income versus spending among the deeply poor: A paradox

Despite significant differences in reported income, the poor and the deeply poor have similar expenditures. How can the deeply poor be spending $9,000 more per year than they report in income? There are several possible explanations:

The implications of deep poverty for mobility

Even if the short-term consumption patterns for poor and deeply poor households are broadly similar, day-to-day spending struggles are only part of the deep poverty story. There is reason to believe that even a short amount of time in deep poverty damages the prospects of children’s success.  Using the benchmarks and data created for the Social Genome Project, we find that those born in families in deep poverty are less likely to succeed in all stages of life, and that the gaps between the poor and the deeply poor widen considerably as the children get closer to adulthood. Here are the Project’s benchmarks of success at six life stages:

And here are the proportion of children born into deep poverty, poverty and the middle class clearing each of those hurdles:

Many shades of poverty

The word “poverty” can conjure an image of a monolithic, homogenous group of households with incomes below a line specified by a formula. But this is a false picture. There are gradations of poverty and wide variations in the lived experience of poor people. For many, poverty is far from a fleeting experience. Poverty is “sticky” across generations, especially for those born into deep poverty. Many of the policies that help those closest to the poverty line do little for those at the bottom of the heap, who may not be in position to do much to help themselves. The danger is that they remain stuck at the bottom, the very poorest citizens of one of the wealthiest nations on earth.