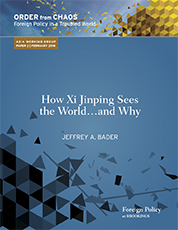 Since the founding of the People’s Republic of China in 1949, China has gone through a series of phases marked by sharply differing conceptions of what its leaders believe the international order should look like. These changing views reflect an underlying ambivalence toward the existing order. China is currently undergoing a new phase, whose meaning can be understood more fully by understanding how China’s leaders got to where they are today in their thinking about the global order. By examining the continuity and the changes of the last seven decades, what is genuinely new and different and what is familiar can be better distinguished.

There is a temptation to see the changes in China’s trajectory as reflecting the vision of President Xi Jinping. Xi has already demonstrated that he is a decisive leader, stronger than his predecessor and determined to not only manage China, but to transform it to meet huge unsolved challenges, primarily at home but also abroad. Actions like the creation of the Asian Infrastructure Investment Bank and island-building in the South China Sea reflect the temperament of a man not afraid to lead, for better or worse. But large national transformations are more often the product of historical forces than the writ of one powerful leader. Understanding how Chinese views of international order since 1949 have evolved should help to clarify Xi Jinping’s particular contributions to the way China sees and wishes to interact with the world.

China’s spectacular economic growth in the last three and a half decades has expanded its capacity and influence. A country with massive global trade and investment ties, as well as an emerging first-class military facilitated by its economic growth sees its interests differently, and Xi’s policies are a product of the major developments of post-1949 China: Maoism, the Cultural Revolution, exile to the countryside, the reforms of the Deng period, and the subsequent surge in economic strength.

These critical moments in China’s development have helped inform Xi’s hybrid approach to the global system, its institutions, and its norms. Whether under Xi or his successor, China is likely to continue to follow a zig-zag path in its attitude toward the international system—it will further develop its relationship with the international system and interdependence with other countries, but at the same, selectively adhere to international norms where they fit its interests and ignore or seek to change them where they do not.