As policy-makers search for ways to share the best of America with the world, they should start with our international volunteers, who embody this country’s spirit of generosity, resourcefulness and hope. With the support of Congress and the Bush Administration, volunteers can become the first face of America to communities in many nations, while advancing concrete initiatives that lift up the lives of the poor throughout the world.

To maximize the potential of international volunteering, we propose that Congress establish a program of Global Service Fellowships to support American volunteers—nominated by congressional members—serving abroad with qualifying nongovernmental organizations (NGOs), faith-based groups, and universities that are committed to advancing peace and development. Initial funding of $50 million would support approximately 10,000 fellowships annually averaging $5,000 each to pay for volunteers’ travel, program costs, and minimal living expenses. In addition, Congress and the White House should work together to double the Peace Corps, authorize and provide support to Volunteers for Prosperity, and increase support of other efforts inside and outside government to enable global service and assess its impact. These efforts will empower a growing coalition of international volunteering organizations to help reach the goal of 100,000 Americans serving in developing countries each year.

The role of international volunteer service in building bridges across growing global divides has never been more critical to the future of our nation, and global peace and stability. Building on the exemplary work of the Peace Corps, a growing field of nongovernmental organizations, faithbased entities, universities, and corporate service programs seek to help communities abroad while enhancing the lives of volunteers. In addition to bringing tangible benefits to the people they serve, members of this new cadre of international volunteers also tend to develop enduring habits of civic engagement and lasting appreciation of foreign partners and perspectives. This strengthens America’s civil society, advances public diplomacy objectives abroad, and deepens American understanding of forces beyond our borders.

This movement of international volunteers could be greatly enhanced by congressional leadership to provide America’s volunteers with expanded service opportunities that would help improve perceptions of the United States abroad. To maximize the potential of international volunteering, we propose that Congress pursue a global service agenda centering on a new program of congressionally-nominated Global Service Fellowships, along with doubling the Peace Corps, authorizing and supporting Volunteers for Prosperity, and increased support of technical assistance and multilateral exchanges. These efforts will empower a growing coalition of international volunteering organizations to help reach the goal of 100,000 Americans serving in developing countries each year.

The unique power of volunteer service has been key to the vitality of our nation since its birth. In the mid-nineteenth century, historian Alexis de Tocqueville noted the unique contributions of voluntary organizations as a core strength of our young democracy. In the following two centuries, presidents from John F. Kennedy to George W. Bush have recognized that volunteering is one of America’s greatest exports.

A longitudinal study conducted by Abt Associates for the Corporation for National and Community Service noted the profound long-term impact of extended service in domestic programs like AmeriCorps on participants’ civic engagement. These benefits include increased volunteer connections and participation in their community, knowledge of local community challenges such as the environment, health, and crime, and personal growth through strengthened habits of citizenship and service.

Service abroad brings the additional benefit of forging personal relationships between generous Americans and poor citizens of foreign lands. While American volunteers come home with a lifelong appreciation of the challenges faced by developing countries, citizens of those nations gain personal experience of American generosity and humanity.

The potential power of these efforts are evidenced in the results of a recent Terror Free Tomorrow poll, which showed a markedly positive change in major Muslim nations’ perceptions of the United States in response to humanitarian relief and service initiatives. Polling data indicated that nearly 60 percent of Indonesians and 75 percent of Pakistanis held more favorable views of the United States following humanitarian assistance after their tsunami and earthquake tragedies. Importantly, this change in perception lasted beyond the initial aid and service, underscoring that America’s actions can have lasting impact.

One illustrative international volunteer example is Kimberly Priebe of Schaumburg, Illinois, who was recently honored by USA Freedom Corps for her service as a World Teach volunteer teaching English in a community college in Vilcabamba, Ecuador. While serving in Ecuador for one year, Ms. Priebe published columns back home that described the serious educational needs of the population in Vilcabamba. After reading the columns, the residents of Schaumburg responded by sending contributions to establish 100 scholarships for young people to attend the Vilcabamba community college. This support, generated by an American volunteer abroad, will foster benefits and bonds that will last beyond the scholarships and affect generations to come. 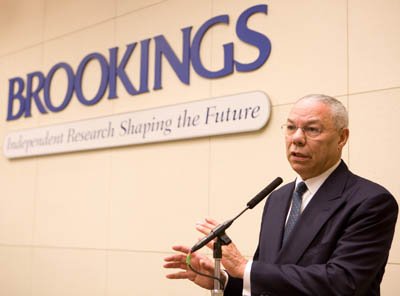 Former Secretary of State Colin Powell delivered remarks in June 2006 at the Brookings Institution. His speech centered on international service and cultural exchange. “Don’t sell us short,” he stated, “One way not to sell us short is to take that which we still have as a valuable commodity, who we are and what we are, and send it overseas in the form of volunteers.”

International volunteering and service should be re-engaged with the level of commitment and imagination exhibited by President John F. Kennedy in 1961 with the launch of the Peace Corps. This legacy should be adapted to meet the twenty-first century’s unique challenges of global conflict and human development. And it should leverage the twenty-first century’s remarkable wealth of organizations outside of government, such as NGO and faith-based partners, corporations and universities committed to advancing global development to meet the goal of engaging 100,000 Americans serving abroad annually.

We ask Congress and the president to raise their sights to these goals by embracing a global service agenda that would empower a wider range of Americans of diverse socio-economic backgrounds and professional skills to respond to a call to service meeting critical humanitarian needs and achieving vital civic diplomacy objectives.

As a centerpiece of this agenda, Congress should authorize a new Global Service Fellowship to support qualifying organizations outside of government that have the commitment and the capacity to sponsor volunteers abroad to advance concrete development objectives. Initial funding of $50 million would support approximately 10,000 fellowships annually averaging $5,000 to pay for volunteers’ travel, program costs, and minimal living expense. This is a fraction of the cost of supporting a Peace Corps volunteer for one year. Global Service Fellowships ranging from both short-term placements of up to six months, to lengthier one year assignments can be an effective “on ramp” both to longer Peace Corps service and a lifetime of civic engagement.

This new initiative, involving government support for individuals in non-profit and faith-based groups, builds on the successful model created by AmeriCorps at home. AmeriCorps has placed volunteers in a variety of civic, community, and faith-based groups. This has strengthened the voluntary organizations while also broadening service opportunities well beyond those available through entities formally connected with government. It is a model that creates a powerful virtuous circle: government can leverage resources beyond its own, and worthy voluntary groups get needed help in building their own capacities to engage millions of Americans in service to the nation.

Global Service Fellowship recipients would be nominated by each U.S. representative and senator, and awards made in the form of a voucher to defray travel and program living expenses redeemable through qualifying international voluntary service NGOs, faith-based organizations, and overseas service learning programs with universities and colleges. Fellowship applicants would initially apply through participating international service programs and, upon acceptance, would submit their Fellowship application to their congressional office for nomination to the appropriate oversight agency.

To promote increased socio-economic diversity in the international service field, added weight in the selection process could be given to qualified applicants coming from households with income less than 200 percent of poverty level. Applicants with demonstrated prior community service experience would, likewise, be given added consideration, as would applicants from skilled disciplines addressing specific host country needs.

David L. Caprara is nonresident fellow and director of the Brookings Initiative on International Volunteering and Service, and the former director of Faith-Based and Community Initiatives and AmeriCorps VISTA, Corporation for National and Community Service.

John Bridgeland co-chairs the Brookings Institution policy working group on International Volunteering and Service. He is CEO of Civic Enterprises, CEO of Malaria No More, and former assistant to the president and director of the White House Domestic Policy Council and director, USA Freedom Corps at the White House overseeing domestic and international service.

Harris Wofford co-chairs the Brookings Institution policy working group on International Volunteering and Service. He is a former United States senator from Pennsylvania and CEO of the Corporation for National and Community Service during the Clinton Administration. He is former special assistant to President Kennedy for civil rights and worked with Sargent Shriver to organize the Peace Corps.