Summer is a popular time to write opinion pieces calling for the end of summer vacation as an anachronism that widens achievement gaps between rich and poor students.  The details of the argument vary—see examples from summers 2009, 2010, 2011, 2012 and 2013—but the basic premise rests on research indicating that students from disadvantaged backgrounds experience learning loss over the summer while their more affluent peers often make learning gains.

There’s clearly a slam-dunk case for eliminating—or at least dramatically shortening—summer vacation, which fits into a broader push to lengthen the school year beyond the 180 days that is typical in the U.S.  Many high-performing charter schools have longer school days and years.  President Obama has called for a longer school year, pointing to the fact that students in countries such as South Korea attend school for many more days than their American counterparts.  Figure 1 shows that the school year in the U.S. is shorter than in most other countries for which the OECD collects data. 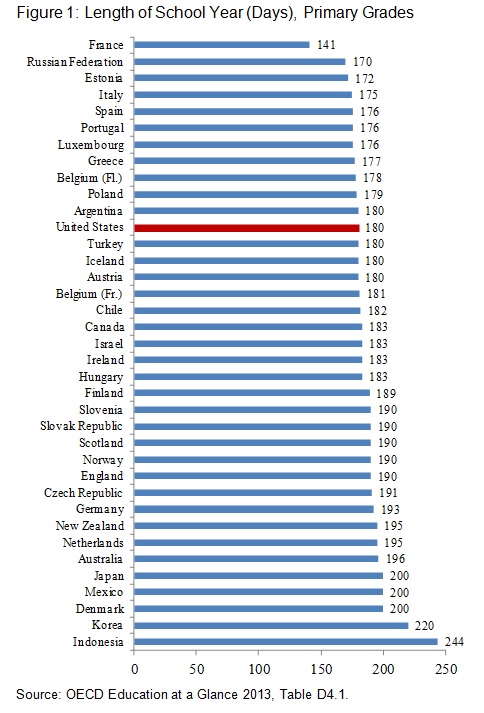 But ending summer vacation isn’t as simple as passing a law extending the school year by roughly two months—it has to be paid for somehow.  Teachers will expect to be paid for working significantly more days, and there are other costs of keeping schools open (such as air conditioning in many parts of the country).  It may well be the case that these costs are justified by the achievement gains of having students spend more time in the school, but in the current fiscal environment substantial increases in educational spending are unlikely to be forthcoming.

How can schools substantially lengthen the school year without spending any more money than they currently have?  One potential strategy is to increase class size in order to free up resources that can be used to pay teachers for the extra days worked.  In the U.S., the typical elementary student is enrolled in a class of 20 students with a teacher paid an average of about $56,000.  Increasing the school year by 30 days (six out of about nine weeks of summer vacation), and paying teachers the same rate per day, would mean a salary increase of about $10,000.  This could be accomplished—without any impact on overall spending on teacher compensation—by increasing class size by 3.3 students.

There’s no doubt that teachers and parents prefer smaller classes, but what would the impact on student learning be of increasing class size by this modest amount in order to make a large increase in the number of days students spend in school?  Research by Maria Fitzpatrick, David Grissmer, and Sarah Hastedt indicates that 30 more days in school would increase student achievement by about 0.15 standard deviations.  This is a conservative estimate, as research by Dave Marcotte and Benjamin Hansen indicates the effect may be twice as large.  The research on class size is decidedly mixed, but the largest estimates (from the Tennessee STAR study) imply that a three-student increase in class size in the early grades would decrease test scores by 0.05 standard deviations after one year (and by less in future years).

Putting these effects together means that adding 30 days to the school year increases student achievement by 0.10 standard deviations—or about 20 days of learning, with the increase in class size accounting for the other 10 days.  These admittedly rough estimates do not take into account the non-salary costs of lengthening the school year, such as teacher benefits, administrator compensation, and facilities costs (including air conditioning).  But even if those costs doubled the class-size increase needed to keep costs the same—an unlikely scenario—ending summer vacation would still increase achievement by 0.05 standard deviations, or 10 days of learning.  And of course my use of a class-size effect on the larger end and a days-in-school effect on the smaller end means that the total effects may well be larger than my conservative estimates suggest. 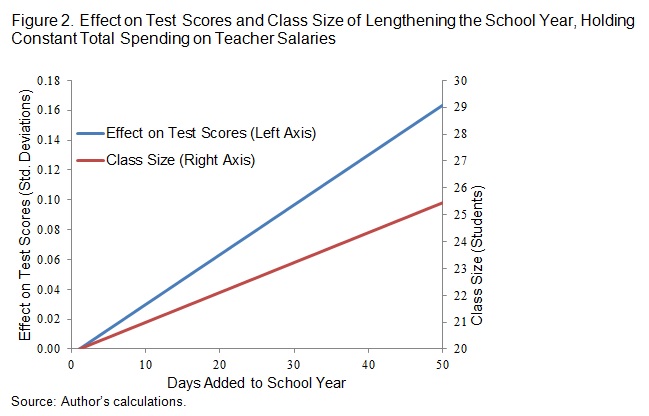 The consequences of a longer school year also vary by state.  This spreadsheet shows the change in class size and teacher salary that would be needed in each state to lengthen the school year by 30 days without changing overall expenditures on teacher salaries.  States that already have classes on the larger side may be less comfortable increasing class size in order to allow students to stay in school longer.  But the estimated effects on achievement of adding 30 days to the school year are tightly clustered around the 0.10 estimate for the nation as a whole.

Extending the school year does not necessarily have to be adopted as a state-level reform.  Given the evidence that students from disadvantaged backgrounds lose ground academically over the summer while other students do not, districts that serve large populations of low-income students should be most interested in trading class size for school days as a strategy to improve student achievement.  Districts might even target longer school years at individual schools where they believe students are most likely to benefit from more time in school.

The research on summer learning loss makes it clear that summer vacation is an important driver of inequality in academic achievement.  Fortunately, it appears to be the case that our public education system can afford to end this anachronism, even in trying economic times.

Building back better: The promise of the American Rescue Plan for education