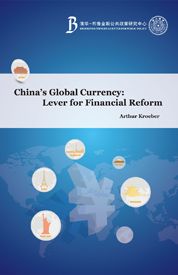 Following the global financial crisis of 2008, China’s authorities took a number of steps to internationalize the use of the Chinese currency, the renminbi. These included the establishment of currency swap lines with foreign central banks, encouragement of Chinese importers and exporters to settle their trade transactions in renminbi, and rapid expansion in the ability of corporations to hold renminbi deposits and issue renminbi bonds in the offshore renminbi market in Hong Kong.

These moves, combined with public statements of concern by Chinese officials about the long-term value of the central bank’s large holdings of U.S. Treasury securities, and the role of the U.S. dollar’s global dominance in contributing to the financial crisis, gave rise to widespread speculation that China hoped to position the renminbi as an alternative to the dollar, initially as a trading currency and eventually as a reserve currency.

This paper contends that, on the contrary, the purposes of the renminbi internationalization program are mainly tied to domestic development objectives, namely the gradual opening of the capital account and liberalization of the domestic financial system. Secondary considerations include reducing costs and exchange-rate risks for Chinese exporters, and facilitating outward direct and portfolio investment flows. The potential for the currency to be used as a vehicle for international finance, or as a reserve asset, is severely constrained by Chinese government’s reluctance to accept the fundamental changes in its economic growth model that such uses would entail, notably the loss of control over domestic capital allocation, the exchange rate, capital flows and its own borrowing costs.

This paper attempts to understand the renminbi internationalization program by addressing the following issues:

How sharp will be the global slowdown?