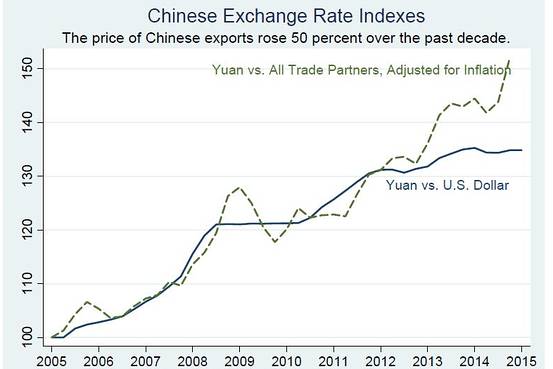 Some policymakers and pundits have argued that currency manipulation–the effort to keep exports cheap by intervening in the foreign exchange market–is the most important issue international economic policy could address. Friday evening, the Senate rejected an amendment by Sens. Rob Portman (R., Ohio) and Debbie Stabenow (D., Mich.) that would have punished currency manipulators. The White House has responded to pressure from Congress, signaling a willingness to bring exchange-rate provisions into trade negotiations, but does not want binding sanctions against currency manipulators to be part of the Pacific trade agreement under consideration.

Currency manipulation is not like pornography–you don’t know it when you think you see it. It’s hard to define and even harder to prove. At one level, any country that has a fixed exchange rate–such as France, Germany, Greece, and China–is, by definition, a currency manipulator. The question is whether a country has kept its currency artificially cheap to boost exports.

The elephant–and tiger–in the room is China, even though China is not one of the countries in the proposed Trans-Pacific Partnership. Advocates of a currency manipulation mechanism call the yuan as Exhibit A. Examining this evidence is instructive, but perhaps not in the way expected by those pushing for a currency manipulation clause in TPP.

The solid line in the chart above shows that the yuan has strengthened 35% against the U.S. dollar over the past decade. All else equal, this represents an effective rise in the price of Chinese exports to the United States by more than one-third, which is certainly not consistent with the charge of continued intentional underpricing.

The case against China’s currency manipulation is even weaker if we consider a more relevant indicator of the overall cost of Chinese exports: China pegs its currency to the U.S. dollar, but it exports to many countries beyond the United States. The world price of Chinese exports must reflect prices among the full range of its trading partners.

Also, the price of Chinese exports depends on the yuan price of what it costs to manufacture in China, not just the yuan price of foreign currencies, and inflation in China has been higher than that of its trading partners. The multilateral, inflation-adjusted price of Chinese exports (represented by the dashed line in the chart) accounts for both of these factors. The chart shows that the overall real relative price of worldwide Chinese exports has risen more than 50% in the past decade, with almost 40% of this increase in the past two years. This has occurred because of the yuan’s appreciation against the dollar, the yuan’s appreciation against the currencies of its other trading partners (as the dollar has appreciated), and the higher rate of inflation in China than among its trading partners.

The phrase “currency manipulator” is loaded, and not just because the evidence for the most celebrated example does not stand up. Not so long ago, governments in emerging markets decried U.S. policies that contributed to a weakening of the dollar, leading to “currency wars,” as the finance minister of Brazil put it, and “irresponsible monetary policy” according to the Indian finance minister. One could argue that U.S. monetary policy correctly focused on the domestic economy’s weakness, but that’s not necessarily how it has been seen in Sao Paolo or Delhi.

Exchange rates swing around for a range of reasons related to relative economic performance, anticipation of future events, and, yes, even the whims of markets. These fluctuations are part of the international spillover effects of economic policy in our interconnected world, regardless of trade agreements. Spillovers create challenges as well as opportunities, as when recovering foreign markets draw in imports from the rest of the world.

A narrow focus on a single bilateral exchange rate may serve some political interests, but economic analysis demands a more nuanced view.

Recent trends in global value chains and beyond