India must build a culture of knowledge creation by fostering public support for research.

Research is like defence, a pure public good which the private sector can directly support only in limited ways. There are no sustainable market solutions for research, the government therefore should provide the necessary support for this. Research is seldom monetized unless it is within private corporations where it is meant for furthering business interests. Most research, on the other hand, is of the nature of a public good. It is of immense value to the society overall, but how do you put a Rupee price on a research paper on poverty, public health or gender inequality? So being a public good, such research has to be supported through non‐ market means. Internationally, therefore, the most common form of financial support for research is philanthropy and government funding.

India’s expenditure on research and development relative to GDP is very low in comparison to most developed and aspiring countries including the BRICS. Research and experimental development are broadly defined as creative work undertaken on a systematic basis in order to increase the stock of knowledge, including knowledge of man, culture and society, and the use of this stock of knowledge to devise new innovations. Disaggregating the data by sources of funding shows that the government in India is the largest supporter of research work, relative to these other countries. This is in stark contrast to the developed countries like U.S., UK and Germany, where private philanthropy has long supported scholarly research. In the U.S., for example, most of the top research universities and institutions were started with private endowment and foresight. 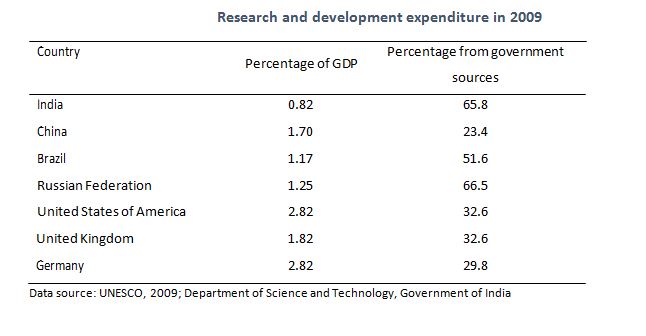 Historically, India has had a rich culture of philanthropy but unfortunately it has largely remained limited to religious activities and institutions. Philanthropic support for research in India remains abysmally low. A natural source of support for research in India therefore can be found in the Companies Act 2013 which mandates qualifying companies to contribute at least 2 percent of their average net profits from the preceding three years to Corporate Social Responsibility. Given this ‘mandatory’ philanthropy, approximately 8,000 companies operating in India will be required to spend an estimated Rs.150 billion annually on CSR activities. Given the public good nature of independent research, this should fall prominently in the realm of CSR activities.

For consistency and ease of implementation, support can be extended for research in areas which are recognized as CSR activities in the Companies Act 2013. These would include research on poverty, education, health, environmental sustainability, gender equality, and vocational skills development. The Companies Act 2013 specifies that individual firms can choose which area to invest in, or contribute the amount to central or state government funds earmarked for socioeconomic development.

More specifically, the activities that are recognized as CSR under the Companies Act 2013 (and hence can be targeted for research support) include the following:

Over the last several decades, India exported her brightest minds to leading global institutions fuelling R&D in several developed countries like US, UK, Germany and Australia. These minds are engaged in cutting edge research which benefits their adopted home-countries and helps them in fulfilling their personal dreams. The loss to India, however, is unfathomable as she has struggled to retain this talent pool but repeatedly lost the battle, but talent must and will find its true value in the globalized market.

India needs to develop its workforce in research and development. According to a World Bank analysis, the nation has fewer R&D professionals per million people than many other nations. India has 160, as compared to 710 in Brazil, 890 in China, 3,838 in the United States, 3,950 in Germany, and 5,151 in Japan. The country should boost its investment in higher education that would help India come closer to producing the educated workforce required for a competitive economy. It would increase the production of graduates with advanced degrees and the skills necessary to enhance R&D in the country.

One of the most promising developments in the research space has been the emergence of private independent research institutions (think tanks and academia). These need philanthropic support for survival because they do not have a revenue model. Teaching institutions have a revenue model but even they struggle to fund non-consulting research, but they offer a public good: in‐depth policy‐relevant high quality empirical research and recommendations. This capacity is valuable to governments, the private sector as well as to the society as a whole, primarily because those ideas and services come from an independent and impartial source. The independence of such research is protected by the institutional commitment to academic freedom of its scholars.

The natural demand for the output of such research institutions comes from the government. This is because policy makers require critical inputs and think tanks have the capacity to contribute analysis and prescription on issues that they are dealing with in the policy realm. Bureaucrats within the government have enormous institutional knowledge but neither the training nor the time for in-depth scientific analysis. In his first month in office, Prime Minister Modi expressed his intent to draw upon the expertise of think tanks which should be treated as a marketplace of ideas that is wide open, diverse and highly competitive.

Knowledge intrinsically contributes to the advancement of a society. In India, we have to build a culture of knowledge creation by fostering public support for research. Extending CSR funding will provide fundamental support for innovation and policy making, thereby improving the lives of ordinary Indians.

This article first appeared in The Times of India on January 27, 2016. Like other products of the Brookings Institution India Center, this is intended to contribute to discussion and stimulate debate on important issues. The views are those of the author.