Twenty years ago, government delegates and a widely diverse group of environmental advocates and activists gathered in Rio de Janeiro, for the U.N. Convention on Environment and Development, better known as the “Earth Summit.” At issue was no less than crystallizing an international consensus on a more environmentally benign approach to human well-being, ecosystem health, and economic growth—a consensus built around the concept of “sustainable development.” Sustainable development provided a balanced approach to all stakeholders—including those valuing environmental protection and those valuing poverty alleviation. It did this by encouraging economic development of a certain kind: development to meet current needs while not sacrificing the environmental quality that would allow economic well-being in the future.

Delegates at that 1992 meeting—having recently secured successful international agreements to address the problem of stratospheric ozone depletion (1987, 1991), and in the broader geopolitical context of increasing internationalism after the fall of the Berlin wall—brought optimism for a new multilateral, cooperative approach to solving environmental and development problems; rooted in this approach, the 1992 Rio summit produced an ambitious blueprint for articulating and achieving those sustainable development goals, as well as launching three major international treaties to address biodiversity loss, desertification, and climate change.

Twenty years later – from June 18 to 22, 2012 – the international community is re-convening in Rio for the next Earth Summit. This meeting, the U.N. Conference on Sustainable Development, or “Rio+20,” presents an opportunity to assess how well we have done, what might be necessary for the future, and how those aspirations might be met, starting in the concrete reality of the global economy in 2012.

The first opportunity at Rio is to assess progress. Many assessments of environmental progress have recently been published, but the most comprehensive report evaluating specifically the Earth Summit goals has been the U.N. Environment Programme’s fifth Global Environmental Outlook report (GEO-5). The report synthesizes what is known scientifically about broad environmental areas like deforestation, climate change, and water availability and quality. The most recent report conducted an assessment across 40 of the goals set out in Agenda 21 document from the 1992 Rio Earth Summit. Experts evaluated the quality and scope of data, and sought to synthesize the degree of progress in each of these goals—rating them from “substantial progress” through “deterioration.” Figure 1 below summarizes the results, and shows mixed progress across the various environmental categories. The report noted significant progress in addressing global ozone depletion, phasing out lead in gasoline, and, in some contexts, cleaning up drinking water. There were also a number of categories that saw moderate progress—outdoor air pollution, heavy metal pollution, sanitation and water use efficiency to name just a few. Such positive examples are worth studying in greater depth to better understand the components of success for each—combinations of stakeholder advocacy, policy, private sector initiative, consumer choices and market interactions.

The report noted significant progress in addressing global ozone depletion, phasing out lead in gasoline, and, in some contexts, cleaning up drinking water. There were also a number of categories that saw moderate progress—outdoor air pollution, heavy metal pollution, sanitation and water use efficiency to name just a few.

However, the UNEP report also identifies a number of key areas that have seen little or no progress: climate change, indoor air pollution, species extinction risks, marine pollution, habitat and sustainable management, to name a few. Moreover, the report identifies several areas that have deteriorated in the past two decades, such as the health of coral reefs, the area of wetlands, and global fish stock levels. Finally, insufficient data were available to assess the health of 14 other areas; while not directly informative, this result underscores an eminently addressable need for improved global data collection and synthesis. 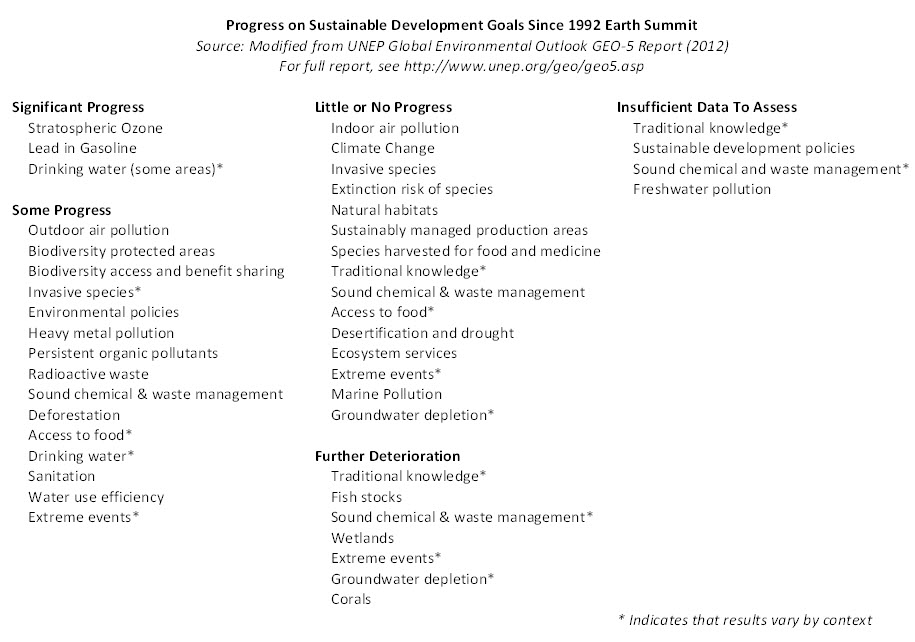 In addition to assessing progress along specific metrics, it is worth taking the opportunity to assess the adequacy of mechanisms—in other words, policies and institutions—that we are using to try to reach those goals.

It is also worth evaluating progress toward other sustainable development goals. Over 1.3 billion people still do not have access to electricity; water availability and sanitation is improved but not close to universal; and 4 billion people live at the Base of the Pyramid (BOP) on less than $9 per day. To take just one of many examples, the U.N.’s “Sustainable Energy for All” (SE4All) initiative reports that nearly 40 percent of the world’s population rely on wood, coal, charcoal,or animal waste to cook their food, causing nearly two million deaths a year, most of them women and children, and roughly 1.3 million of which occur in low-income countries. Improved cookstoves and fuels could improve lives while lowering the environmental burden—SE4All estimates [2] that “replacing outdated cookstoves and open fires with modern energy services would save the lives of 800,000 children who die each year as a result of exposure to indoor smoke.” Moreover, outdoor particulate pollution is estimated by UNEP to be responsible for around 3.7 million deaths annually and ground level ozone 700,000 deaths. These air pollution examples are just some of many instances where environment and development goals are fundamentally linked.

The second opportunity of Rio+20 is to set out a new vision for what is needed in the future. Officially, the meeting is set to focus on two themes, and has organized conversations around seven focal areas. One theme focuses on integrating sustainable development and poverty alleviation with steps toward a so-called “green economy.” This theme seeks to make explicit the links between economic growth and vitality to sustainable development, with a new focus on how market transformation into clean technology industries can create new opportunities for prosperity. The second theme is focused on improving the institutional architecture to achieve these goals. While somewhat more mundane, this theme seeks to make real if incremental progress in countries’ ability to formulate, adopt and implement their own sustainable development strategies.

Discussions at the Rio+20 meeting will take place across multiple venues and in different formats. The central focus will be official state-to-state discussions that will seek consensus on a series of meeting decisions. This document (or set of documents) will address recap the consensus on the two main themes described above. The discussions themselves are officially clustered around seven topical areas, also known as “priority areas”: jobs, energy, sustainable cities, food security and sustainable agriculture, water, oceans and disaster readiness. Of course, part of the interest in large summits like Rio+20 is that they entrain many other kinds of civil society participants in non-governmental and international organizations — advocacy organizations, multilateral groups, think-tanks, corporations and more. These groups will be presenting reports, monitoring progress on the official outcome documents, and contributing to the discussions in multiple ways: panel discussions, thematic days (e.g., Energy Day, Forest Day), exhibitions and report releases.

The third opportunity of Rio+20 is to establish some concrete pathways for how this new global vision might be met via national or international policy, corporate investment or strategic decisions and individual actions. So what are the prospects for Rio+20? On the one hand, the continuing tenuous health of the global economy, combined with some key countries’ skepticism of cooperation and multilateral initiatives present a more challenging landscape than was present at the first Rio conference. Such pressures will limit the degree to which many countries are willing to offer additional financial resources or agree to implement stringent new domestic policies. On the other hand, the recent shift toward contextualizing sustainable development as a part of economic vitality (jobs, growth and human well-being) has the advantage of underscoring to countries a broader set of positive outcomes from well-implemented development strategies. To the extent that this realization can lead to new business models and market transformations, Rio will have been a success.

The recent shift toward contextualizing sustainable development as a part of economic vitality (jobs, growth and human well-being) has the advantage of underscoring to countries a broader set of positive outcomes from well-implemented development strategies.

Nevertheless, the immediate circumstances are not conducive to any major new treaties, large funding commitments, or other so-called “binding” agreements. More likely will be agreement on two more tractable areas: goal setting and new institutional structures, and possible smaller agreements within the seven focal areas. A large amount of work has already been undertaken by governments under the auspices of multiple U.N. preparatory meetings. Given the direction of these meetings and early draft documents, the most likely outcomes [3] from Rio seem fairly clear:

The prospect of lack of major new treaties might seem disappointing when we are faced with the real and measurable lack of progress toward many key development and sustainability goals. However, one of the many lessons of the past 20 years is that, with a few targeted exceptions, environmental policies tend to work best when they are conceived and implemented at the national level. Such domestic policies, however, do not emerge from a vacuum—they are informed by success stories, by ideas and by norms of what we, as both national and global citizens, do and do not want. Moreover, for any given country, the sources of such ideas come both from within and from abroad, from stakeholders, citizens, corporations, and peer countries. In this light, the Rio+20 document—likely entitled “The Future We Want”—is potentially helpful in informing domestic policy.

With a few notable exceptions, large international summits like the Rio+20 meeting are not the ideal forum for implementing concrete, binding policy rules for individual jurisdictions—that is often better done at domestic levels. However, such meetings provide a rare and welcome opportunity for governments, experts, advocates and other stakeholders to pause and review the broader arc of progress toward shared goals. These shared goals and the norms that evolve and eventually underpin them must undoubtedly form the basis for the actions that will be effected by individuals, the private sector, and national governments. The Rio+20 meeting promises to provide just such a platform. While it is unlikely that it will produce a new and sweeping international architecture, it will serve as a useful venue to establish new sustainable development goals and a process to support progress toward them. That said, the fundamental question is whether the meeting will represent simply an incremental step in the direction set in the first Rio meeting, or whether delegates will seize upon this rich opportunity to articulate a genuinely new pathway to for a sustainable, innovative, and vibrant future for our global community.

[3] For a fuller discussion of these themes, refer to the Brookings Report “Rio+20: Coalitions Driving Bottom-Up Change,” available at https://www.brookings.edu/research/reports/2012/06/rio20

Our last, best chance on climate

To rule the waves: How control of the world’s oceans shapes the fate of the superpowers