Yesterday’s dizzying stoppage-time goal by Landon Donovan put the U.S. World Cup squad through to the next round of the tournament, and that dramatic finish probably created a new crop of American soccer fans in the process. Up next for Donovan and company is Ghana, a physical team that, despite an injury that sidelined their star midfielder Michael Essien before the tournament, should test the U.S. side and make for another competitive match.

In a nation of immigrants, though, not everyone will be rooting for the Yanks against what will very likely be the only squad to represent the host continent in the tournament’s second round. Indeed, the fastest-growing foreign-born population in the United States comes from Africa. In the 2000s, their numbers increased by about 550,000, or nearly two-thirds. At 1.4 million, Africans still represent only about 4 percent of immigrants in the United States. But in some corners of the country, they maintain a more substantial presence.

In fact, our home region of Washington, D.C. is one of the country’s major centers of African immigration, second only to New York. Nearly one in seven foreign-born individuals in the D.C. metro area is from Africa. Not only that, but a sizeable proportion of this region’s African population–nearly 20,000 overall–actually hails from Ghana. (Erstwhile D.C. United wunderkind Freddy Adu was born in Ghana, though one presumes he’ll be pulling for the U.S. side). West African immigrants are also numerous in Atlanta, Boston, Philadelphia, and Dallas. 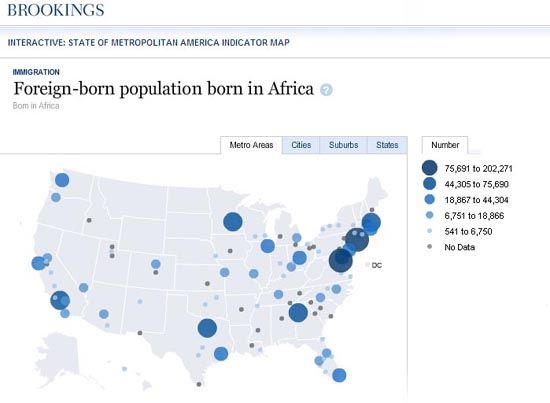 Of course, Africa’s a big continent where, to put it mildly, not everyone has always gotten along. So Somalis in the Twin Cities, Egyptians in L.A., Nigerians in Houston, and even the Ethiopians and Eritreans here in D.C. might be just as likely to pull for their adopted country as for the Black Stars. Or maybe, like most of the rest of the world, they’ll all just root for Brazil.