The Chilean earthquake that hit during the early morning hours of February 27 has brought searing images of devastation; and international news coverage has shown scenes of looting and arson incidents occurring in its immediate aftermath.

In Chile, criticism of the government’s response is widespread. Many are wondering whether numerous deaths and severe destruction could have been prevented; whether the government’s emergency response and rescue to this natural disaster was speedy and effective; and why law and order broke down in the earthquake’s aftermath. Criticism has focused on the failure by the central authorities to alert coastal populations of the impending tsunami, its delayed and timid reaction to unrest in the most devastated region in the south (where most of the looting has taken place), and its slow initial distribution of essential supplies.

By providing a comparative perspective that considers both the magnitude of the natural disaster and Chile’s governance characteristics, we suggest that in spite of some important mistakes Chile has thus far fared relatively well. We identify selected shortcomings, which present an opportunity for further reform and progress in Chile.

Natural Disasters and the Death Tolls

As of March 5, the Chilean government had confirmed 279 identified victims, although the death toll is likely to increase by the hundreds considering many have not yet been identified or are deemed missing. Yet the death toll is highly unlikely to reach thousands. Nonetheless, the tragic death of hundreds of people is enormously saddening and brings grief to many others.

Yet, the Chilean earthquake was the fifth strongest quake for over a hundred years, measuring 8.8 on the Richter scale. This propels it to the nefarious elite “mega-earthquake” league, which means that it was hundreds of times stronger than other earthquakes near populated areas in recent years, with the exception of the 2004/5 Indonesian earthquakes.

The real question then is why the death toll in Chile is not vastly larger. Chile’s mega-earthquake was relatively deep, which may have partially mitigated its monstrous force at the surface. Not only did the earth shake for a long time, but the earthquake’s epicenter was also very close to several highly populated centers. As a result, a vast area was affected—from the south where Chile’s second largest city, Concepción, lays very near the epicenter, to Santiago at the country’s center and further north. And additionally, not only did the earthquake cause massive surface destruction, it also triggered a tsunami and numerous and severe aftershocks (often exceeding a magnitude of 6.0).

It may be of little consolation for those in Chile, but when a natural disaster of this magnitude hits, the number of expected deaths would have been vastly higher in most other countries in the world.

Chile’s good governance played a significant role in limiting the death toll resulting from this earthquake. In particular, two dimensions of governance stand out—government effectiveness (the efficacy of the public sector), and control of corruption. Over the years, Chile’s effective institutions succeeded in designing and adopting better building codes, which have been periodically upgraded, to take into account previous earthquake experience, innovations in preventative technologies and the country’s growing wealth (made possible in part by good governance).

Equally noteworthy is that these building codes are enforced. The media has brought to international public knowledge a new high-rise that has collapsed in Concepción and an apartment building near Santiago that has been rendered inhabitable since it is leaning more than the Tower of Pisa. Notably though, these examples indicate that non-compliance with building codes (and possibly corruption) is likely individualized, rather than systemic. Naturally, there are many damaged structures, particularly (but not exclusively) those built long ago. Even though there are many people close to the epicenter who are now homeless, the overall stock of houses was not decimated and the number of fatalities due to buildings collapsing was limited. In fact, a very large portion of deaths resulted from the tsunami instead.

Undoubtedly, as with past earthquakes, lessons will be drawn from damage assessments and building codes will be improved; but overall the existing system did work. In contrast with the devastating effects that corruption in the construction sector had on the cities affected by the earthquakes in Turkey (where many new residential buildings collapsed) and China (where many schools full of pupils collapsed), the low levels of corruption in Chile, coupled with effective institutions, help explain why building codes were largely enforced.

More broadly, empirical evidence, such as that presented by Kahn’s study on natural disasters (gated, ungated), suggests that among other factors, governance and corruption control are determinants of the death tolls. A review of recent earthquakes, as shown in Table 1, and of the quality of governance (in terms of governance effectiveness and control of corruption) is also suggestive, as depicted in Chart 1. 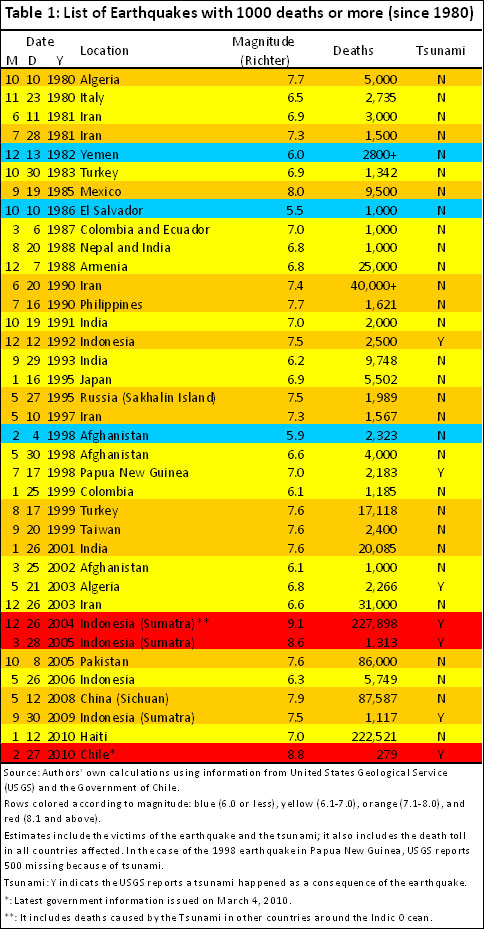 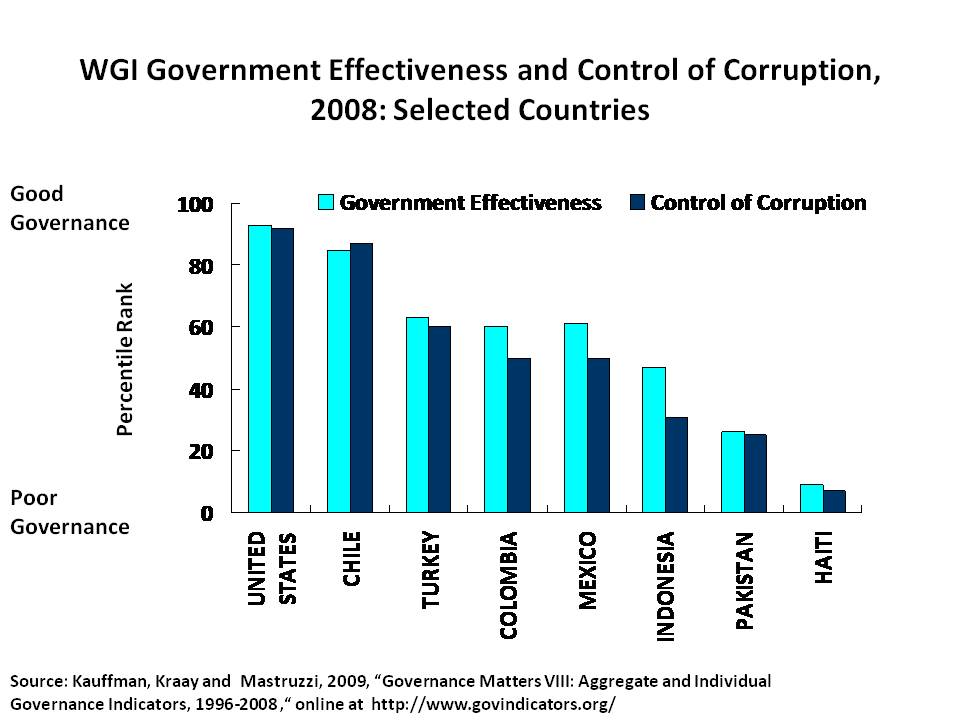 Advance planning for earthquakes, including training drills, is an integral part of adult and child education in Chile. In terms of immediate crisis response, however, serious mistakes occurred.

First, the tsunami alert was mishandled apparently by a responsible unit in the Navy, which failed to coordinate with the national emergency office. Even if the tsunami threat would have been identified in a timely fashion by the responsible authorities (which it was not), it is unlikely that the information would have been relayed in time to the affected localities. This is because the warning system relied on the internet and telephony, both of which were disabled during the power grid failure.

Second, the government was initially slow in dispersing essential supplies to the most afflicted cities in the south, partly due to its inability to assess local needs as a result of the power failure.

Third, the government hesitated and delayed the deployment of the army to assist in the relief effort and to maintain law and order—partly as a result of narrow political calculations and latent sensitivity to the use of armed force given the memories of the Pinochet regime. Looting and arson did take place in some localities, while the press widely reported those incidents that did occur.

After these initial delays in the first few days, the central government, armed with better organization, more information and increased decisiveness has streamed help into affected areas, providing emergency supplies and restoring law and order. The mistakes made, while not trivial, need also to be put into perspective. Perfection is wholly unrealistic in any crisis situation of this magnitude and complexity, where thousands of critical decisions and steps need to be taken in a coordinated fashion by many officials in disparate locations and in a very short period of time.

For instance, more serious blunders occurred during the U.S. response to 2005 Hurricane Katrina in New Orleans. Over 1,800 people died and tens of thousands were perilously stranded in their flooded homes, stadiums and convention centers for days. Looting, violence and disorder erupted and lasted nearly a week until 40,000 troops arrived belatedly to restore law and order. Today the city has only about two-thirds of its pre-Katrina population.

This serious string of mishaps took place in a country with a generally effective government. Serious mistakes were made regarding the evaluation and maintenance of the old levees, the evacuation of citizens, availability of sufficient stocks of supplies before the hurricane, and in the coordination of rescue and recovery efforts in its aftermath.

As we observe in the chart, the U.S. also exhibits high levels of control of corruption; although within U.S. cities, New Orleans has not historically been known for excelling in probity. A corollary of this comparison between Chile and the U.S. is that a serious mistake by the government in times of a sudden crisis brought by a natural disaster is not a symptom of underdevelopment. Neither is the eruption of riots.

The real “governance test” is the ability and flexibility of a country’s institutions to address and contain crisis, which does include learning and acting quickly to address and correct mistakes. In the ongoing rescue and relief operation in Chile, it is obviously early to have a definitive assessment, but the evidence is already encouraging, and consistent with good governance: while building on its strengths, the government has already acknowledged mistakes made and has been moving decisively to correct them. As a result, some modicum of calm is being restored as relief efforts are broadened and order is restored.

Another crucial component of the “governance test” is the local-level response. The heroic efforts by many local government officials, community leaders and villagers often do not entice the TV cameras the same way that a building ablaze, a looted store, or a collapsed structure does. Those deeds may go largely untold and uncounted (as of yet), but they do play a key role in complementing, and at times, supplanting the central government’s efforts. A powerful example was the life-saving efforts by local officers in some coastal towns who blared evacuation instructions through bullhorns once the earthquake struck, supplanting the failed “sophisticated” tsunami alert from the center.

Some Governance Implications for Chile

Clearly right now the priority ought to be the continued expediting of the relief effort in a decisive, well-coordinated and targeted fashion. Yet, it is important to start planning for the reconstruction phase as well.

Relatively speaking, Chile will be well positioned for that challenge given its high level of governance. In sharp contrast to Haiti, it will not require a massive international aid effort (although it will require targeted technical and equipment support from other countries), nor will it require the inception of major new institutions (and particularly no foreign-driven institution will be needed). And while the reconstruction funding needs will be very large, in many billions of dollars, Chile’s resilient economy and stellar macroeconomic discipline gives it substantial headroom to fund this reconstruction without excessive reliance on debt (or inflationary) financing. Further, the dynamic private sector is expected to play a pivotal role.

In the reconstruction effort, it will be important to apply the lessons learned and mistakes made during this earthquake, such as in improving the tsunami warning system, ensuring sufficient backup power and establishing emergency communication systems, and designating strategic locations for crucial human resources and supply stocks around the country. Applying lessons regarding standards for some types of construction, such as in the reinforcement of older structures and hospitals, may be required as well. And Chile’s modern and transparent procurement system will now be put through a major test given the scope and urgency of the upcoming infrastructure investments that will be required. Yet measures will need to be in place, including particular monitoring from civil society, so to mitigate the risk of capture by powerful private firms, a risk whenever there is a surge in large lucrative contracts.

There are also broader challenges that will need to be addressed. Among institutions, the police and the army may need to be reformed and modernized. A move toward some modicum of decentralization and devolution of central authority ought to be considered in light of this experience.

And more generally, the looting and arson is a potent reminder of the potentially explosive socio-economic tensions inherent in an unequal society. In fact, among pre-earthquake governance challenges in Chile, consistently common crime would top the list, which in part is due to an insufficiently professionalized police force, and in part the result of socio-economic inequalities and under-employment among the poor. The massive investment and job creation effort that will be needed in Chile’s south may offer a unique opportunity to also tackle these pending challenges.

Indeed, a tragic natural disaster such as this can also become an opportunity for Chile to emerge even stronger and more equal. Leadership is, and will be, key.