The failure of Congress to fulfill its responsibilities as the first branch of government—to engage in responsible and deliberative lawmaking, to police the ethical behavior of its members, and to check and balance the other national political institutions—contributed to the demise of the Republican majority in last November’s midterm election. So how well is Congress performing under its new Democratic leadership?

Congress is certainly working harder. The House speaker, Nancy Pelosi, and the Senate majority leader, Harry Reid, have set five-day work weeks as the norm, not the exception, and both chambers have been in session much more frequently in the first quarter than they were in the comparable period of the previous Congress. All measures of activity have increased: committee markups, roll call votes, measures passed, and laws enacted and signed by the president. Of course, because most bills are still in process, just how bountiful or meager the legislative harvest will be remains uncertain.

Divided government has clearly helped Congress regain its position in the constitutional order. After years of inattention, Congressional oversight of the executive has intensified, most sharply regarding the war in Iraq. And hearings have appropriately focused more on policy and administration than personal scandal. The White House is being challenged on many domestic and national security matters it took for granted with the largely compliant Republican Congresses.

The contrast between old and new is less evident in the way Congress goes about its lawmaking. In the first three months of the new Congress, the House frequently circumvented committees and adopted closed rules preventing floor amendments. Procedural shortcuts often limited the minority party’s participation in the deliberative process. Senate action has been frustrated by holds and filibuster threats based largely on partisan differences: witness the substantial increase in cloture votes and motions to bypass committee consideration of bills. The next months will test the Democrats’ promise to return to “regular order.”

Finally, while the new Congress has taken important steps to improve the ethical climate, much remains to be done, including strengthening the Lobbying Disclosure Act and adopting a more credible and independent ethics process—two measures that House Democratic leaders have promised to bring to the floor before Memorial Day.

The chart [below] shows just how much the new Congress has accomplished in its early months, compared with the old Congress over the same interval. A glossary of legislative terms follows. 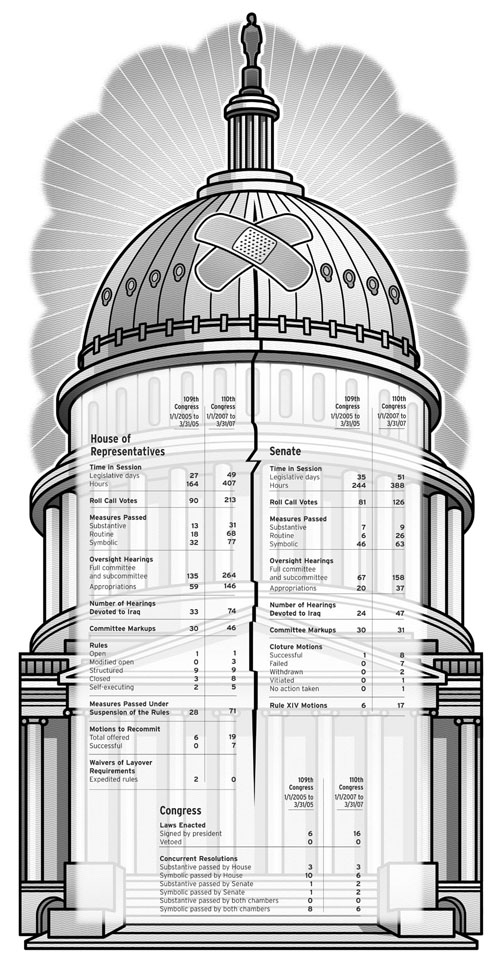 OVERSIGHT HEARINGS These include hearings that a committee calls oversight hearings; hearings held by oversight subcommittees; reauthorization hearings for specific federal programs; hearings on specific portions of the federal budget; and hearings that investigate an established problem or an existing program or policy.

RULES The House Rules Committee determines which of five types of rules will set the conditions for the debate and amendment of a particular bill. An open rule allows any member to offer an amendment that complies with the standing rules of the House. A modified open rule requires amendments be preprinted in the Congressional Record. A structured rule allows three or more amendments to be considered; a modified closed rule allows only one or two. Closed rules prohibit amendments other than those recommended by the committee that sent the bill to the floor.

WAIVERS OF LAYOVER REQUIREMENTS Layover requirements stipulate how long the House must wait to deliberate after a bill or conference agreement is sent to the floor. One waiver, an expedited procedure rule, allows legislation to be brought to the floor the day that the House Rules Committee approves the rule governing its debate and amendment process, rather than the day after. The second waives the requirement that a conference report be considered by the House no sooner than the third day after it has appeared in the Congressional Record.

MOTIONS TO RECOMMIT Under House rules, this motion allows those in opposition to a measure one final chance to obtain a recorded vote on their preferred course of action. A motion to recommit without instructions is not debatable, and it effectively kills the bill under consideration by requiring that it repeat all the steps in the committee consideration process. A (more common) motion to recommit with instructions sends the bill back to the committee that sent it to the floor.

RULE XIV MOTIONS Under Senate rules, all measures must be read twice, on different legislative days, before they can be referred to committees. Rule XIV states that if a senator objects to further consideration of a bill at its second reading, the bill is placed directly on the Senate’s legislative calendar. From there, it can be called up for consideration on the floor, bypassing committee consideration.

Misinformation is eroding the public’s confidence in democracy