Editor’s Note: This article was originally published on VoxEU.org.

Latin American growth is cooling –off sharply. In contrast with the 6.6% average growth rates prevailing between September 2003 and September 2008 – the pre-Lehman-crisis “Golden Years” for the region – LAC-7 GDP growth rates in 2012-13 are decelerating significantly, and reverting back to their mediocre historical average displayed over the last 20 years (see Figure 1). [1] Moreover, growth rates are cooling off in almost every country in the region. 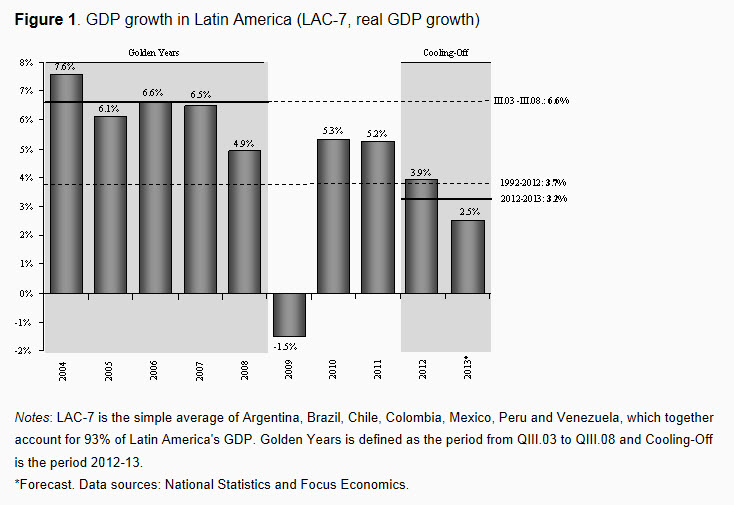 The dynamics of the external factors

Is a more hostile external environment responsible for the cooling-off in growth rates that we are observing in the region? Let us look closely at the three key external drivers, one at a time.

Global growth rates in 2012-13 declined to 3%, significantly below the growth rates of 3.8% observed during the Golden Years (September 2003-September 2008). For an inattentive observer this fact, taken in isolation, might suggest the region is now facing less favourable external conditions that justify Latin America’s slower growth rates.

However, this is not the picture that emerges when looking at other very relevant external determinants of Latin America’s economic performance.

This low world interest rate and risk premia environment still sustains historically high capital inflows to Latin America – currently running at more than $290 billon a year, three times higher than the average level observed during the Golden Years, and even above the maximum levels attained during that period.

Given that two out of the three relevant external drivers of economic growth facing the region are more favourable today than in the Golden Years, it is not obvious at first glance that the external environment for Latin America has actually deteriorated.

To gauge the behaviour of external factors affecting Latin America’s economic performance in a systematic way, we developed the External Conditions Index (ECI). The ECI is intended as a barometer to rigorously measure the pressure that external factors are putting on the region -–either favourable or unfavourable (see Figure 2). This index is a weighted average of the three key external drivers identified by Izquierdo, Romero and Talvi (2008):

The index is quarterly, covers the period ranging from March 1990 to March 2013, and is normalised to take values between 0 and 1. This indicator allows us to classify external conditions faced by Latin America into five regions: very unfavourable, unfavourable, neutral, favourable and very favourable (see Talvi and Munyo 2013 for technical details). 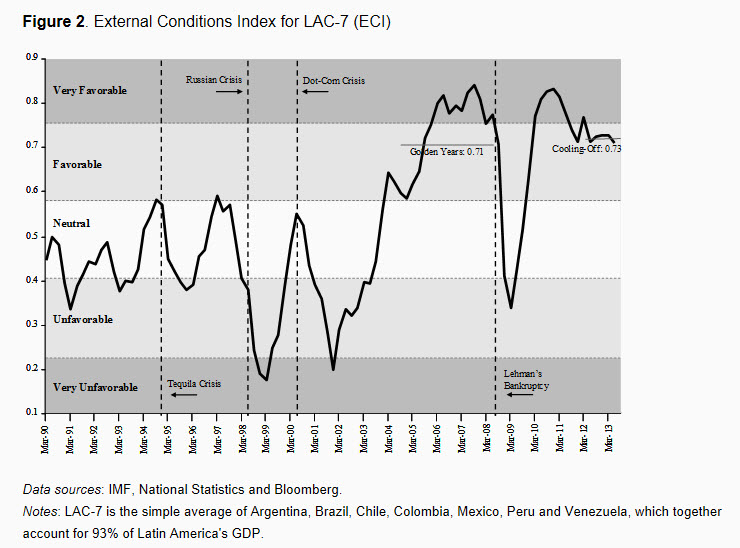 According to the ECI, the cooling-off in Latin America’s growth rates has occurred in spite of the fact that the current combination of external conditions – lower global growth with higher commodity prices and lower capital and borrowing costs – is overall as favourable as the one prevailing during the Golden Years.

How can we explain the paradox of the regional cooling-off in economic activity in a context where external conditions are, on average, as favourable as those prevailing during the Golden Years? During the Golden Years, external conditions improved significantly relative to the preceding period (1998-2003). Global growth increased from an average of 3.0% to 3.8%, commodity prices jumped an average of 75%, and the yield of the emerging market bonds fell from an average rate of 13.5% to 7.4%.

The previous analysis implies that we should be careful when reading Latin America’s current growth performance – the region’s growth rates are slowing down significantly in spite of the fact that the external environment remains favourable overall. In other words, unless we anticipate that external conditions will improve significantly relative to current levels, the observed slowdown in growth rates is not an oddity that will go away anytime soon. Rather, it is more likely to be the “new normal”, even if external conditions remain favourable.

Are idiosyncratic factors in Latin America playing a role in either mitigating or contributing to the cooling-off set in motion by the dynamics of external factors? After many years of high growth well above the region’s historical average, it may be the case that production possibilities are being exhausted in a region where, in many cases, improvements in physical and technological infrastructure and human capital may have not kept up with the strong output growth performance of the past few years. If this were the case, the rate of growth of economic activity should decline due to restrictions in some of the inputs of the production process that make it impossible for output to continue growing at previous rates. For this reason, among the multiple relevant idiosyncratic factors, we focus on identifying countries in the region where supply bottlenecks may have developed.

In order to identify countries with supply bottlenecks, Talvi and Munyo (2013) estimate the production possibility frontier (PPF) based on the current endowments of natural capital, human capital, physical and technological infrastructure, and total factor productivity for each country in the region, and assess which countries are above and below the production possibility frontier. 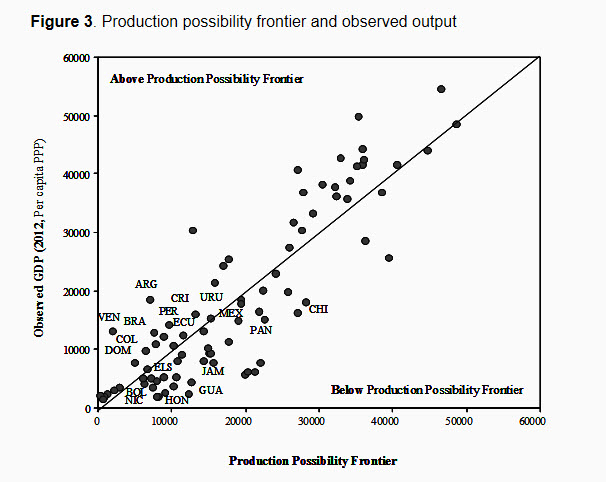 As a result, many South American countries were the recipients of large inflows of capital and displayed very high rates of growth.

To conclude, current growth rates in Latin America are cooling off, in spite of a still favourable external environment as the impact of the past improvements in external conditions on growth dissipates through time, and supply bottlenecks kick in. Even if external conditions for the region remain favourable, unless they start improving once again, they are unlikely to be a renewed source of stimulus for higher growth rates as they were during the Golden Years, when external conditions markedly improved. In fact, the eventual withdrawal of massive monetary stimulus by the Fed and the central banks of other advanced economies, foreshadows tighter financial conditions, and slower inflows of foreign capital for emerging economies and Latin America.

Stimulus to higher growth, thus, must come from domestic sources. During the years of very high growth rates, there were visible improvements in macroprudential policies, and successful implementation of targeted social programs in many countries in the region. However, the region still drags substantial deficits – with notable exceptions – in the quality of its human capital, the quality of its physical and technological infrastructure, and its productivity levels.

It is undeniable that Latin America’s spell of vigorous growth in the last decade translated into higher incomes, lower poverty rates and a rising middle class (as measured by income). This high growth created a sense of progress, hope, and opportunity. If these are to become tangible realities, high growth rates need to be sustained. Policymakers should not expect this to happen due to a new round of good fortune coming from abroad, but rather as a result of their efforts to elicit internal transformations that start closing the region’s deficits to rekindle higher growth. Failure to do so may result in a wave of disappointment and social discontent.

[1] LAC-7 refers to the seven largest Latin American economies, namely, Argentina, Brazil, Chile, Colombia, Mexico, Peru and Venezuela, which together account for 93% of the region’s GDP.

[2] The weights of each of the components were defined by their relative importance in explaining Latin America’s economic growth.

More on Latin America & the Caribbean