Inequality remained a prominent theme in public debate during 2015, likely helped by the unexpected rise and resilience of democratic socialist Bernie Sanders’ run for the Democratic presidential nomination. Although the labor market continued its slow recovery, wage growth remained fairly weak—especially for middle and low earners. The upper middle class continues to pull away from the middle, not least in terms of income and wealth.

But it has also become much clearer that inequality is a geographical issue, as much as a social and economic one. Whether the focus is on the more immediate matter of income inequality or the slower-burning issue of intergenerational mobility, there is huge variation between different places in the United States.

Not all cities are created equal…

National income trends are important, of course. But they can often disguise deep differences by place. The income required to be ‘rich,’ at least by comparison to those around you, varies significantly between different cities, for example. A household income of $100,000 puts you on almost on the top rung (around the 95th percentile) of the income ladder in Detroit. But to reach the same heights in San Jose, California, you’d need an income three times as great, according to calculations by my colleague Alan Berube.

There are also very large differences in the extent of income inequality in different metropolitan areas. Using the inequality measure used in another recent paper by Berube, the ratio between incomes at the 20th percentile and the 95th percentile, shows that while some cities have large gaps between rich and poor, others look almost Scandinavian in their egalitarian distributions. Here are the 20/95 ratios for the three most equal and unequal cities in the U.S.: 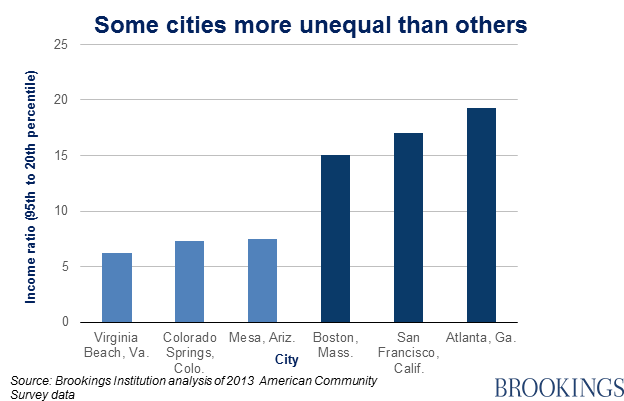 In a groundbreaking research paper in 2014, Raj Chetty and his team at the Equality of Opportunity Project at Harvard showed that rates of intergenerational income mobility also vary considerably between different cities. It was always a stretch to compare the U.S. to Denmark on this front, given the colossal differences between the countries. But such comparisons became virtually unconscionable once the variations within the U.S. become apparent.

This year, Chetty and his co-author Nathaniel Hendren went a step further and a big step closer to showing a causal impact of place on the prospects for children raised in different locations. Again relying on large administrative datasets, the two scholars were able to show the variation in earnings for the folk hailing from, say, Baltimore versus Baton Rouge.

Professor Chetty presented his new research at a Brookings event in June (which you can view here), just weeks after the eruption of protest and violence in Baltimore following the death of Freddie Gray. One striking finding was that the worst place in America to grow up, in terms of subsequent earnings, is Baltimore City. Critically, Chetty’s research design allows him to show that these differences do not reflect the characteristics of the people of Baltimore; but the characteristics of Baltimore itself. This downward effect on earnings is particularly bad for boys, as we highlighted in an earlier blog: 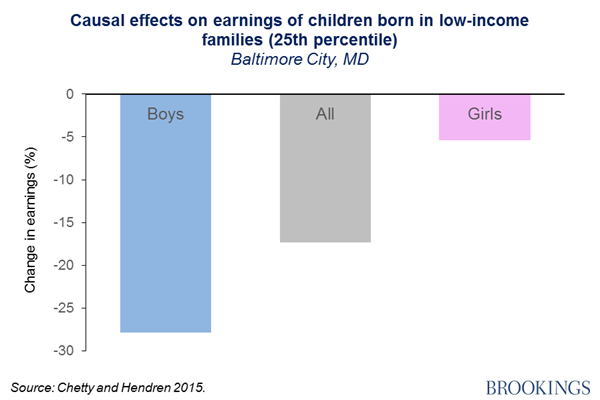 In related work, Chetty and his colleagues also show that children who move to a better place see an improvement in their own earnings—and that the younger they are when they move, the bigger the impact. The children of families who move as a result of the U.S. Department of Housing and Urban Development’s Moving to Opportunity program showed sizable improvements in their own outcomes, as Jonathan Rothwell highlighted in his blog, ‘Sociology’s revenge: Moving to Opportunity (MTO) revisited.’

One of the findings from Chetty’s earlier work is that race, place, and opportunity intersect in important ways. Cities with more segregation, and those with larger black populations, tend to show weaker upward mobility patterns. In order to understand the obstacles to upward mobility, policymakers have to adopt both a place-conscious (Margery Turner) and a race-conscious perspective. This policy was the subject of another Brookings event in November, with contributions from the Deputy Prime Minister of Singapore, the Governor of Delaware, and the Mayor of Newton, Mass. (The event can still be viewed here; for my highlights see this piece.) Being poor and black is generally not the same as being poor and white. Being poor in Cleveland is not the same as being poor in Charlotte.

Many states and cities are upping their game on issues of equality and opportunity, for both bad and good reasons. The bad reason is the relative inertia of the federal government. The good reason is a growing recognition that many of the levers for improving opportunity lie in the hands of institutions and agents at the state and metro level. Colorado has adopted a life-cycle opportunity framework and is pioneering efforts to integrate health and social policy. Charlotte has a high-profile taskforce (which I advise) on improving opportunity. Cincinnati has pledged to lift 10,000 children out of poverty within five years. Louisville is leading a push on school desegregation. Kalamazoo is adding greater student supports to its existing promise of free college. Baltimore’s program to reduce infant mortality has shown remarkable success. Durham, N.C. has rolled out a universal home visiting program.

Many of these efforts are building on the emerging ideas around ‘collective impact,’ harnessing local resources of many kinds around a clearly-articulated, shared goal. Given the scholarship showing just how much particular places influences individual and broader outcomes, this is likely to be where much of the most important policy development will take place in coming years. In terms of equality—and especially equality of opportunity—we need to think local, and act local, too.

Chinese protesters are reacting to a broken social contract