The government shutdown and the nation’s near-default captured headlines, but they are unlikely to have huge consequences for the economic recovery. The current expansion has been slow but comparatively steady. It has been too sluggish to end the misery of the long-term unemployed but strong enough to add about 160,000 jobs a month since payroll employment began to rise in March 2010. While the pace of expansion is heartbreakingly slow, it’s fast enough to gradually trim the ranks of the unemployed.

The slow-motion rebound from the Great Recession stands in contrast to recoveries before the 1990s. It’s easy to forget that the United States once viewed itself, and was viewed by others, as the home of the “employment miracle.” Notwithstanding severe recessions in the mid-1970s and early 1980s, employment always came roaring back. After each downturn, the adult employment rate reached new peaks in the ensuing recovery.

The country has slipped a long way in the employment league tables. In 1989 the U.S. was a leader in both labor force participation and employment rates among the world’s wealthy countries. Compared with 16 other rich countries, the U.S. had above average participation rates in every age group between 16 and 74.[1] Because its unemployment rate was below that of most other rich countries, the U.S. enjoyed an even bigger advantage in gainful employment rates. The nation’s most noticeable advantages were among the young (people under 25), the elderly and near-elderly (people past 55), and women. Even if we exclude more backward southern European economies from the comparison, the U.S. enjoyed a clear edge in youth and old-age employment rates.

Fortunately, involuntary unemployment remains lower in the U.S. than in many of the comparison countries. Thus, the employment-rate gap in most age groups is narrower than the gap in labor force participation rates. Nonetheless, there is now a sizeable deficit in the employment rates of Americans in prime working ages. For purposes of comparison, about 80 percent of 35-54 year-olds are employed on average in the other 16 countries. The U.S. employment rate in this age range is about 4 percentage points lower. If we exclude the hard-hit south European countries from the comparison, the U.S. employment deficit is about 7 percentage points. Nearly all the gap is traceable to a shortfall in prime-age participation rates in the U.S. In other words, the gap is due mainly to Americans’ voluntary withdrawal from the workforce.

A stronger U.S. economy would undoubtedly help. If jobs were plentiful and if they offered good wages, many Americans would flock into the job market. But stronger economies would also boost employment and participation rates elsewhere, especially in countries, like Greece, Portugal, and Spain, that suffered far worse recessions than we did. The deep puzzle is why the once-humming U.S. job machine has experienced such deep and persistent engine problems. 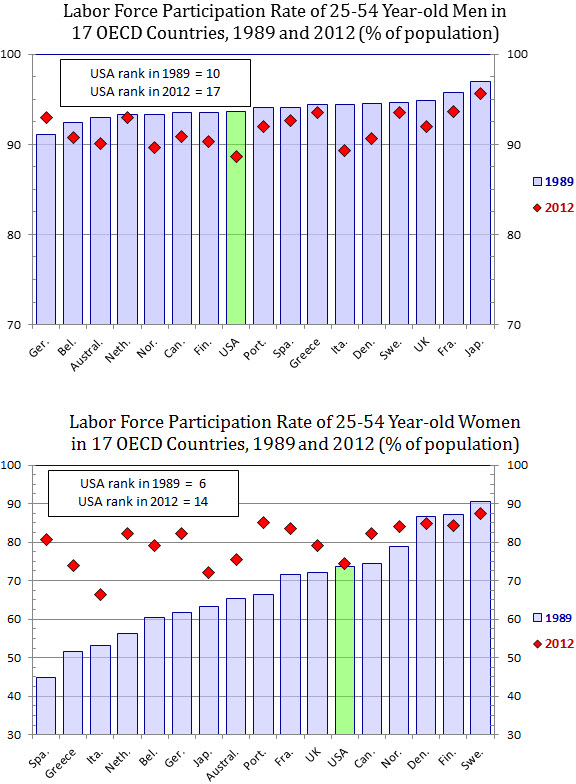