Just before Congress adjourned for its August recess, Democrats engaged in a flurry of legislative activity, while Republicans complained about a “do-nothing” Congress’s meager policy accomplishments. Deep partisan differences, narrow majorities and a Republican in the White House have frustrated Democratic ambitions and fueled a toxic atmosphere in both chambers of Congress. The public’s low approval ratings reflect broad discontent with the direction of the country but also displeasure with Congress for failing to reverse course on Iraq and for continuing the bitter partisan warfare.

But has this really been a do-nothing Congress? The circumstances are similar to those in 1995, when a new Republican majority in both houses took office under a Democratic president. So perhaps the best question to ask is, how is this 110th Congress doing compared with the 104th Congress, in 1995?

Both new majorities began by spending more time in session, holding more committee meetings and roll call votes, and passing more substantive measures than the Congress before them had. At the same time, in both cases, the number of bills signed into law by the president from January to August dropped.

Still, the Democratic Congress’s legislative harvest this year has been bountiful compared with that of its Republican counterpart in 1995. Back then, the Republicans’ Contract With America was stymied by opposition from the Senate and the president. The new Congress has enacted a far-reaching lobbying and ethics reform bill, an increase in the minimum wage, recommendations of the 9/11 Commission, foreign investment rules and a competitiveness package, and has embedded a number of major initiatives and new priorities in continuing and supplemental spending bills. Democrats also made headway on energy, children’s health insurance, college student loans, Head Start, drug safety and a farm bill—though much of this awaits action in the Senate or in conference and faces a possible veto.

During the first seven months of 1995, Congressional oversight of the executive branch increased modestly in the Senate but not at all in the House. But this year Congress, especially the House, has intensified its oversight, following years of inattention and deference by its Republican predecessor.

Democratic promises to restore civility and regular parliamentary procedure by allowing the minority party a larger role in deliberations have foundered. The number of restrictive rules for debate has increased, and the conference process has been short-circuited on various occasions.

In the Senate, Republicans have made the filibuster, or the threat of filibuster, routine, setting a 60-vote hurdle for all contested legislative matters. This has led Harry Reid of Nevada, the majority leader, to file many more petitions for cloture than Bob Dole, his counterpart in 1995, did.

The chart below shows what the 110th Congress accomplished before it closed for its August recess, compared with its immediate predecessor and with the Republican Congress that took office in 1995. 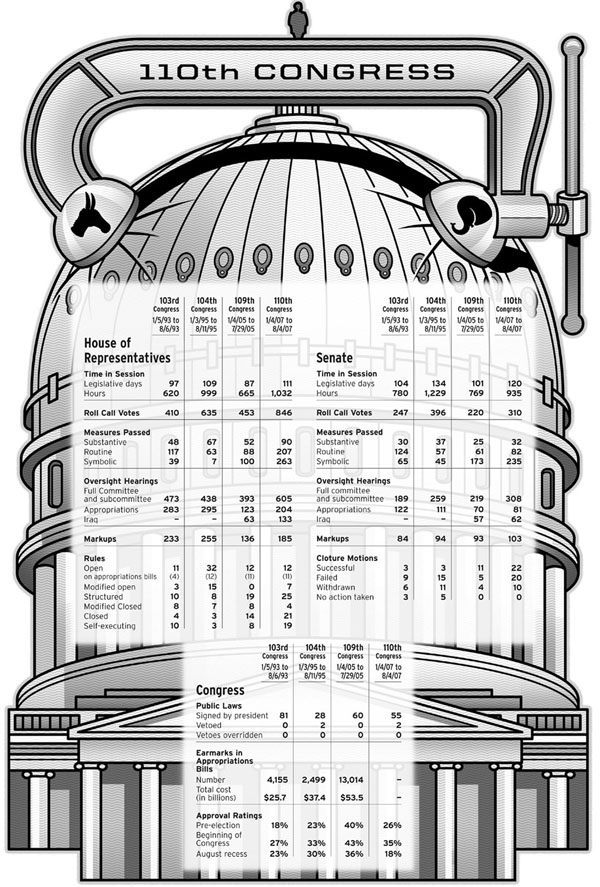 Misinformation is eroding the public’s confidence in democracy