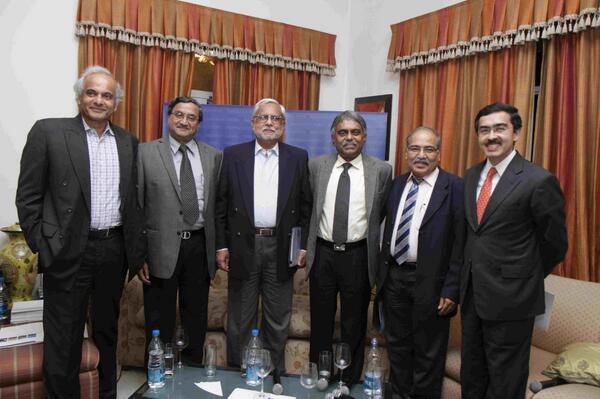 Based on the 700 million tons of overall energy consumption in India today, of which we import about 30%, McKinsey predicts that consumption will grow 2.5 times in 2030 to approximately 1.5 billion tons. At 51% predicted level of imports in 2030 (at current business’s supply and demand level) and 1.5 billion tons of energy consumption, we run the risk of becoming the most import-dependent economy in the world. The first, basic point is: we have a problem. With 1% energy efficiency, and the impact of substitution with renewables, coal and other sources all built in, we will be at 51% imports in 2030 (far from the predicted 1% in the US and 20% in China)

Suggested initiatives for bridging the gap between supply and demand are:

We have unique opportunities with the emerging supply situation in the Middle East with the US backing out imports, and export opportunities out of Africa and North America. We can help our energy companies globalise, to strengthen links with the Middle East, as well as establish gas positions in North America and East Africa. In 5 years, it is difficult to change much. In 15 years, however, we can change almost anything about our energy scenario.

Beyond these buckets of supply-demand responses, there are specific institutional responses that have to be made. First, how do we govern the sector? Currently, we have 12+ ministries. Inter-ministry coordination is bleak and the need for a strong integrated energy policy is growing to coordinate various energy silos.

Secondly, how do we continue to bring private capital into the sector? This is linked to the marked-linked pricing of crude, coal and gas and removing subsidy-based distortions across the chain.

Thirdly, how do we bring more tech investment to manufacturing and R&D? Will it make sense to have a central energy fund to catalyse higher-risk technology investments, or higher-risk acquisitions? It may be time for some sharp and specific changes in how we govern the sector and how we take calls on pricing, technology, and funding high-risk decisions.

1)      Better communication strategy from the perspective of the producer rather than the consumer is needed.

What will it take to change some of the price queues across source and consumption ends?

Several panelists addressed the recent uproar over the contentious issue of gas pricing. It was generally asserted that the energy sector needs better communication from the perspective of the producer, not the consumer. Indeed, as a panelist and several members of the audience asserted, the voter is the consumer, but needs to understand production dynamics of gas to understand pricing. Another panelist strongly noted that market discovery of gas pricing is not an option right now, but the sector needs a regulatory mechanism in order to possibly and potentially de-politicise the process.

2)      An Umbrella Ministry? More optimism and clarity on structural institutional change is necessary.

A significant portion of the discussion addressed the benefits and structural constraints to developing an integrated energy policy, a single ministry, or even an Energy Minister to handle and coordinate the various energy silos that currently exist.

The question many in the audience asked was: how do we end up with an integrated energy policy? One panelist felt strongly that suggesting an ‘umbrella ministry’ was falling into the trap of forming solutions without understanding the intricacy of the problems – rather, that our system of energy governance needs more autonomous, depoliticised bodies and a more fundamental overhaul than an integrated policy will provide. Others panelists, however, suggested significant structural changes, stating that looking ahead, the government needs a framework of several different energy secretaries under one, all-encompassing, Energy Minister. It was suggested that, by having an external regulator, it may be possible to integrate and depoliticise the sector.

3)      View renewables as a supplement source, not a substitute source

Energy consumption of the top rural bracket is equal to the bottom urban bracket, excluding 75 million urban dwellers without electricity. A rural housewife cooking in an unventilated kitchen second-hand smokes the equivalent of 500 cigarettes in an hour. The panel noted that we are addressing disease in rural areas through sanitation, whereas malnutrition and unclean fuel are the ‘biggest killers’.

One panelist asserted strongly that we should not be putting all our eggs in the hydrocarbon basket. Indeed, while in the medium term we should concentrate on hydro power, renewable solar power will be ‘the answer’ in the long run. Another panelist agreed, stating that to reduce the carbon footprint and reduce dependence on imported crude, we need to focus our future on renewables. In response, an audience member asserted that it is necessary to take advantage of low-hanging fruits. We need to combine renewable energy with energy efficiency and a smart grid, and address the reality that process heat and hybridisation, as the ‘lowest possible hanging fruit’ have been ignored.