The smartest places on Earth: Why rustbelts are the emerging hotspots of global innovation 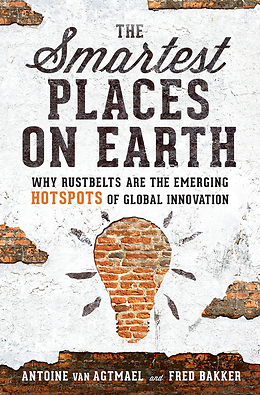 The conventional wisdom in manufacturing has long held that the key to maintaining a competitive edge lies in making things as cheaply as possible, which saw production outsourced to the developing world in pursuit of ever-lower costs. In contradiction to that prevailing wisdom, authors Antoine van Agtmael, a Brookings trustee, and Fred Bakker crisscrossed the globe and found that the economic tide is beginning to shift from its obsession with cheap goods to the production of smart ones.

Their new book, “The Smartest Places on Earth” (PublicAffairs, 2016), examines this changing dynamic and the transformation of “rustbelt” cities, the former industrial centers of the U.S. and Europe, into a “brainbelt” of design and innovation.

On Wednesday, April 6 Centennial Scholar Bruce Katz and the Metropolitan Policy Program hosted an event discussing these emerging hotspots and how cities such as Akron, Albany, Raleigh-Durham, Minneapolis-St.Paul, and Portland in the United States, and Eindhoven, Malmo, Dresden, and Oulu in Europe are seizing the initiative and recovering their economic strength.

Co-author - "The Smartest Places on Earth: Why Rustbelts are the Emerging Hotspots of Global Innovation"

Co-Author - "The Smartest Places on Earth: Why Rustbelts Are the Emerging Hotspots of Global Innovation"

Co-author - "The Smartest Places on Earth: Why Rustbelts are the Emerging Hotspots of Global Innovation"