1. Ensure that quality is a focus when capacity is expanded
2. Align learning in institutions with skills desired by the job market
3. Make research a priority in academic institutions
4. Impose stronger entry restrictions for private institutions, but reduce regulations that impede functioning 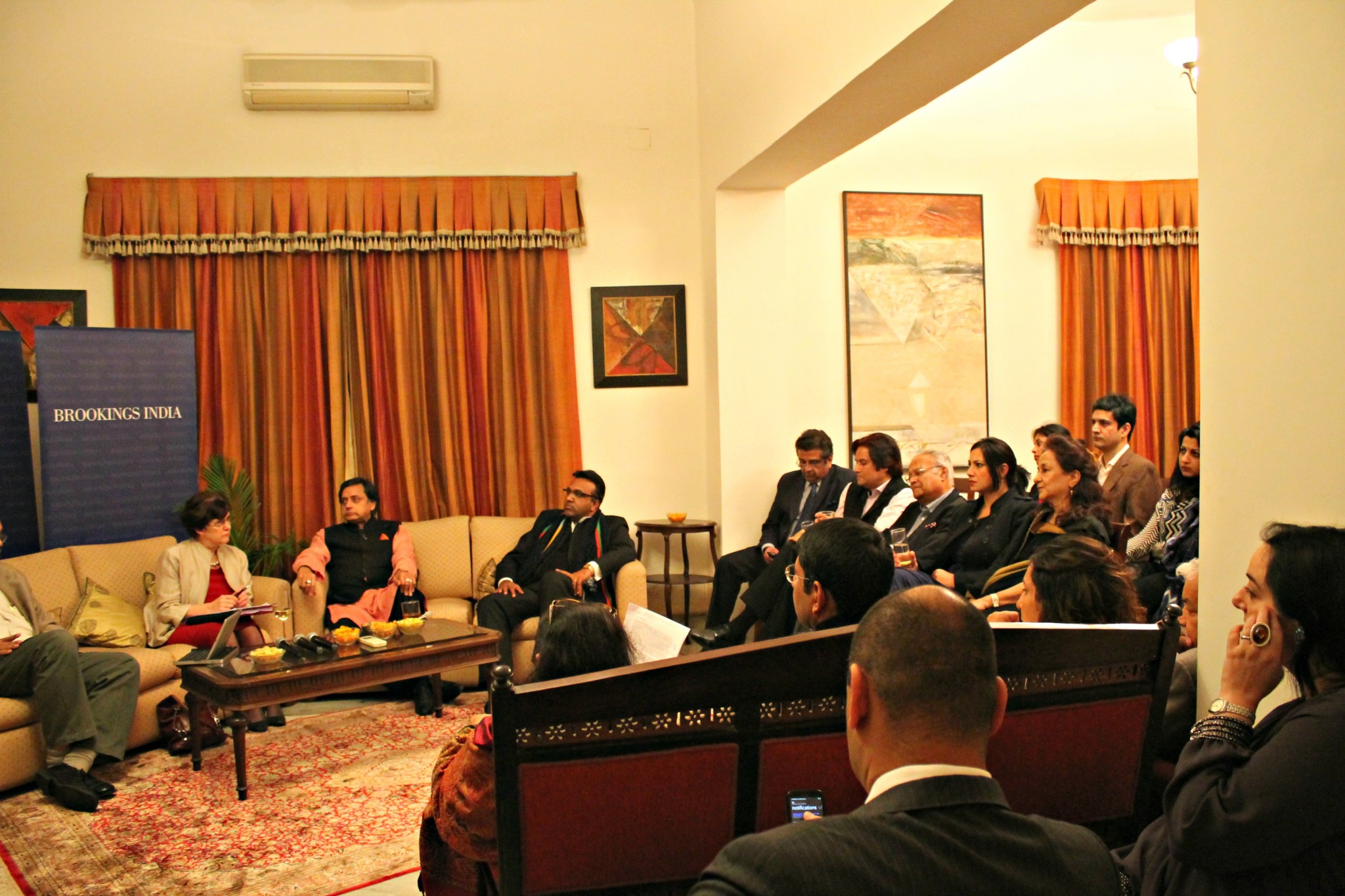 A number of experts gathered at Brookings India to discuss the challenges facing the Indian Education sector. Watch a recording of the discussion here

Experts in higher education converged at Brookings India to discuss some of the most pressing challenges confronting the sector. The panel – comprising Minister of State for Human Resource Development, Shashi Tharoor; Principal of Somverville College at the University of Oxford, Alice Prochaska; and the Vice Chancellor of O.P. Jindal Global University, C. Raj Kumar – generated many interesting insights and ideas. In particular, four big issues emerged that should be at the center of any policy action in this sector:

Expansion of capacity should not happen at the cost of quality:

Minister Tharoor said the government was reasonably proud that it had been able to reach out to the unreached, but conceded that, “where we have arguably failed is excellence in higher education,” adding that institutions such as the IITs and the IIMs are “islands of excellence in a sea of mediocrity.” Vice Chancellor Raja Kumar echoed Tharoor’s sentiments: “I think we made a big mistake by undertaking rapid expansion without taking into account the quality.” While Raj Kumar agreed there was a demographic challenge in increasing access to higher education, he expressed concern with the quality of education being provided, drawing attention to the severe shortage of teachers across the board. He explained that even well funded central universities and institutions such as the IITs and IIMs have 35-40% of their faculty positions lying vacant.

India Needs to Build a Culture of Vocational Education:

One manifestation of the poor quality of education is that graduates fail to meet the needs of their employers. Minister Tharoor cited a FICCI study, which found that 64% of employers weren’t happy with the quality of graduates they were hiring. He provided the example of Infosys, which has created a university campus where new employees are educated for a year after they are hired.

To address such issues and to align learning in institutions with skills desired by the job market, Tharoor explained that the Government of India was hoping to launch several initiatives. For instance, an association with industry is now a prerequisite for being able to open a polytechnic, so that the institution may forge a connection with what the industry needs. Additionally, the Minister announced the government’s plan to launch over a hundred ‘community colleges’ this year. These, he said, would act as “a halfway house between a vocational training center and a real university, providing a mix of vocational and academic courses.”

The minister challenged the private sector to also enter the vocational education market to bridge the gap between the needs of employers and the training provided to students.

Institutions are not doing enough research:

Indian education institutions continue to perform poorly in international rankings. Not only are they unable to compete with those in the United States and the United Kingdom, they also fare poorly in rankings of institutions in developing countries. Addressing this, Tharoor pointed out that majority of the rankings ascribe a high weight to the quality of research conducted by institutions. “But our universities,” he added, “have traditionally been teaching institutions, where very little research is done.” Understanding that we ought to be doing more research, Tharoor urged the private sector to invest more in research, as 80% of research in India stems from the government sector, contrary to OECD countries.

The Indian Education Sector is over-regulated but under-governed:

Even though the government has liberalized laws, allowing private and foreign higher education providers to set up shop in India, Raj Kumar explained the process continues to be immensely challenging. “Our system,” he stated, “is characterized by making the process of setting up an institution very difficult, and then constantly harassing them at every possible juncture of creativity.” He expressed his frustration at simple day-to-day activities – starting a course, starting a program, forging partnerships – being impeded by the need to seek approvals and licenses. MoUs signed between Indian and foreign institutions, for instance, need to be vetted and have stringent conditions, such as the need for the Indian institution to be at least five years old. Such requirements restrict the opportunities for institutions to expand and be productive. And according to Kumar, the current environment “requires extraordinary effort to do ordinary things… we aren’t creating an environment where institutions can thrive.”

But even while he censured the complicated regulatory apparatus, Raj Kumar admitted that private education in and off itself is not always good, and that actually, “over 90% of the universities are mediocre, commercial, profit seeking and often at times dubious.”

To resolve this, the Vice Chancellor suggested there should be stronger entry restrictions and a thorough vetting of applications before institutions are established, but then reducing the continuous process of inspection and permission once they are operational.  His view was echoed by others, including Pramath Raj Sinha, Founding Dean of the Indian School of Business, who recommended the establishment of a non-profit accreditation agency, as a quick policy measure that the government can implement in the next 90 days.