Europe 2030 , edited by former Director of the Brookings Center on the United States and Europe (CUSE) Daniel Benjamin, was officially launched in Europe at an event hosted by the Luso-American Development Foundation (FLAD) in Lisbon, Portugal on April 23, 2010. 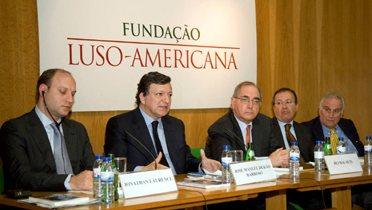 Realized through a partnership between FLAD and CUSE, Europe 2030, assembled a set of distinguished authors to predict what the European Union will look like twenty years from now. A range of views is presented, foreseeing everything from slower growth and diminished power to actions that would make the EU a more vigorous, influential world player.

At this event, Europe 2030, a book edited by Daniel Benjamin, former director of the Brookings Center on the United States and Europe, was officially launched in Lisbon, Portugal. The event featured keynote remarks by European Commission President José Manuel Durão Barroso and presentations by Carlos Gaspar, Ambassador José Cutileiro, and Jonathan Laurence.

President of the European Commission

Director of the Portuguese Institute of International Relations

Planning a trip to Paris, Ukraine’s Zelenskiy has much to gain

Defending democracy against its adversaries