In December 2015, the UN climate summit in Paris reached a consensus on the landmark “Paris Agreement”. COP 21 began a new chapter of the international community’s efforts on climate change. After the Paris meeting, rather than losing steam, the campaign for environmental protection has become a priority of international relations. This year alone, there are a number of significant events that will discuss issues related to climate change, including the G7, G20 and China-US Summit. China will also issue its 13th Five-Year Plan, which will include plans and objections designed to help China and the international community address climate change.

Jennifer Morgan summarized five factors that made the Paris Agreement successful: the real transition of the global economy, vigorous promotion of renewable energy and the low-carbon economy, the US-led transformation of political attitudes on climate change, the active participation of small states, and the skillful diplomacy of France and the United Nations in creating an atmosphere of transparency and urgency. She also noted the increasing leadership role of the Chinese since 1994. Director Morgan highlighted cooperation, referencing the climate of cooperation in Europe on environmental issues, the prospect of collaboration between China and the US, and the need for international climate policy to complement domestic climate policy.

Greenpeace Senior Policy Advisor Li Shuo provided an overview of the new UN climate change agenda and its potential roadblocks, including financing, the facilitative dialogues (2018), and the global stocktake (2023). Echoing Jennifer Morgan, Li Shuo emphasized the question of how to maintain positive momentum post-Paris, as well as the new role of Chinese leadership in maintaining international climate cooperation.

Greenpeace Senior Global Campaigner Lauri Myllyvirt offered a detailed analysis of the new trends in China’s energy consumption. With the support of data on the growth of China’s renewable energy market and the fall in demand for coal, Lauri Myllyvirt forwarded the idea that China’s use of coal is in structural decline. He argued that an early peak of carbon emissions and the successful completion of China’s clean energy goals would depend on the country’s energy transition. A successful transition will improve the climate, protect the environment, and raise living standards. However, more institutional reforms are needed to address overcapacity of heavy industry and the recent recession.

Brookings-Tsinghua Center research assistant Lu Jiaqi pointed out that, due to changes in economic and energy structure, China’s economic growth and coal consumption have already bifurcated. He forecasted that China’s coal consumption would follow the pattern of decline exhibited by the United States and Britain, if at accelerated speeds. Lu Jiaqi concluded that the end of China’s coal era would have a decisive role in the success of the Paris Agreement.

In the roundtable discussion, Jennifer Morgan, Qi Ye, Debbi Seligesohn, Liu Qiang, Li Zheng, Liu Shuo, and Lauri Myllyvirta examined a host of climate change topics, including the relationship between climate change and a consumption-based economy, the multicollinearity of factors explaining China’s decreasing coal use, the actual turning point of Chinese coal consumption, the fortunes of the coal chemical industry, the importance of establishing environmental standards for exported power plants and for the “One Belt, One Road” initiative, and the need for domestic legislation to enforce international climate policy. 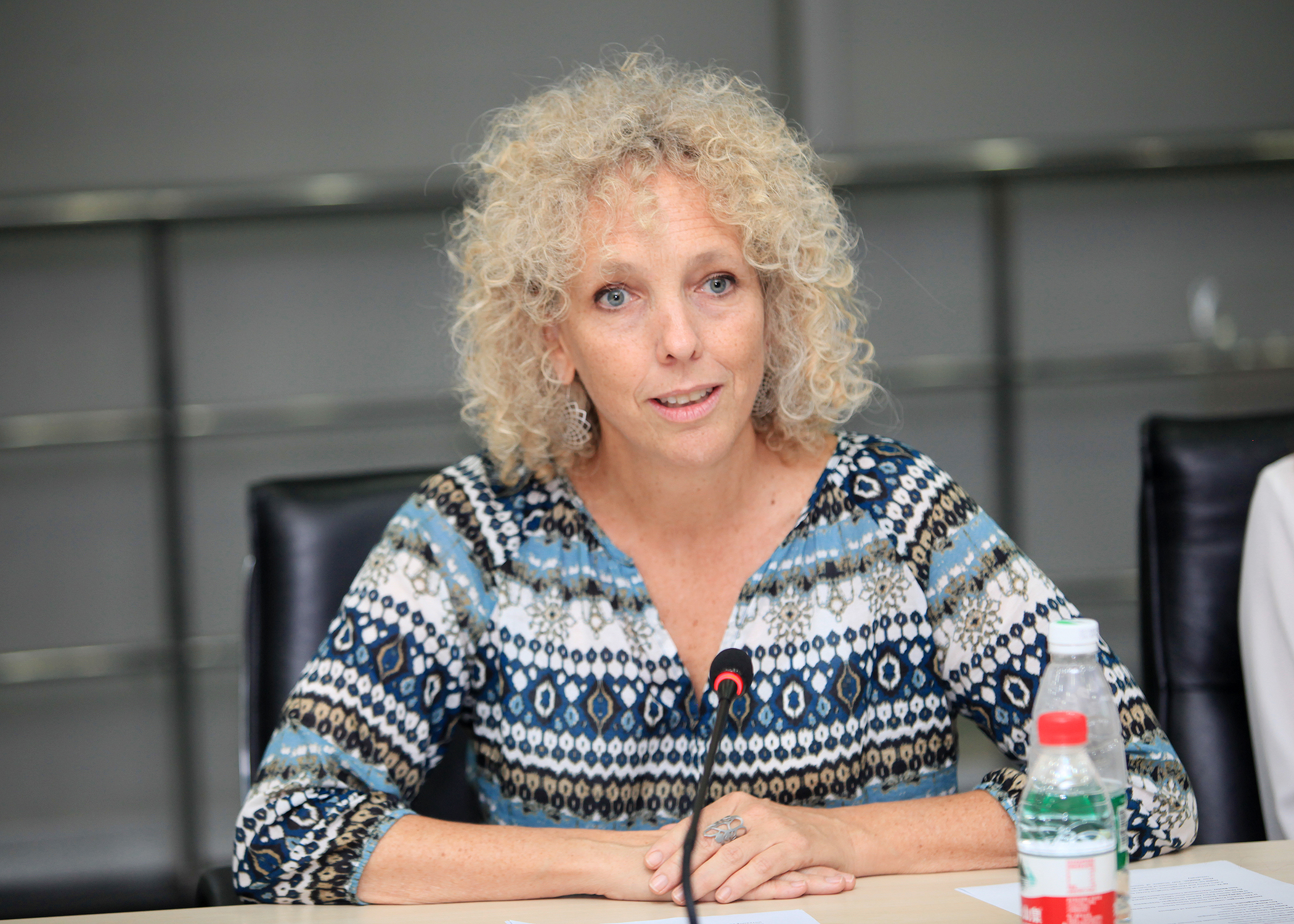 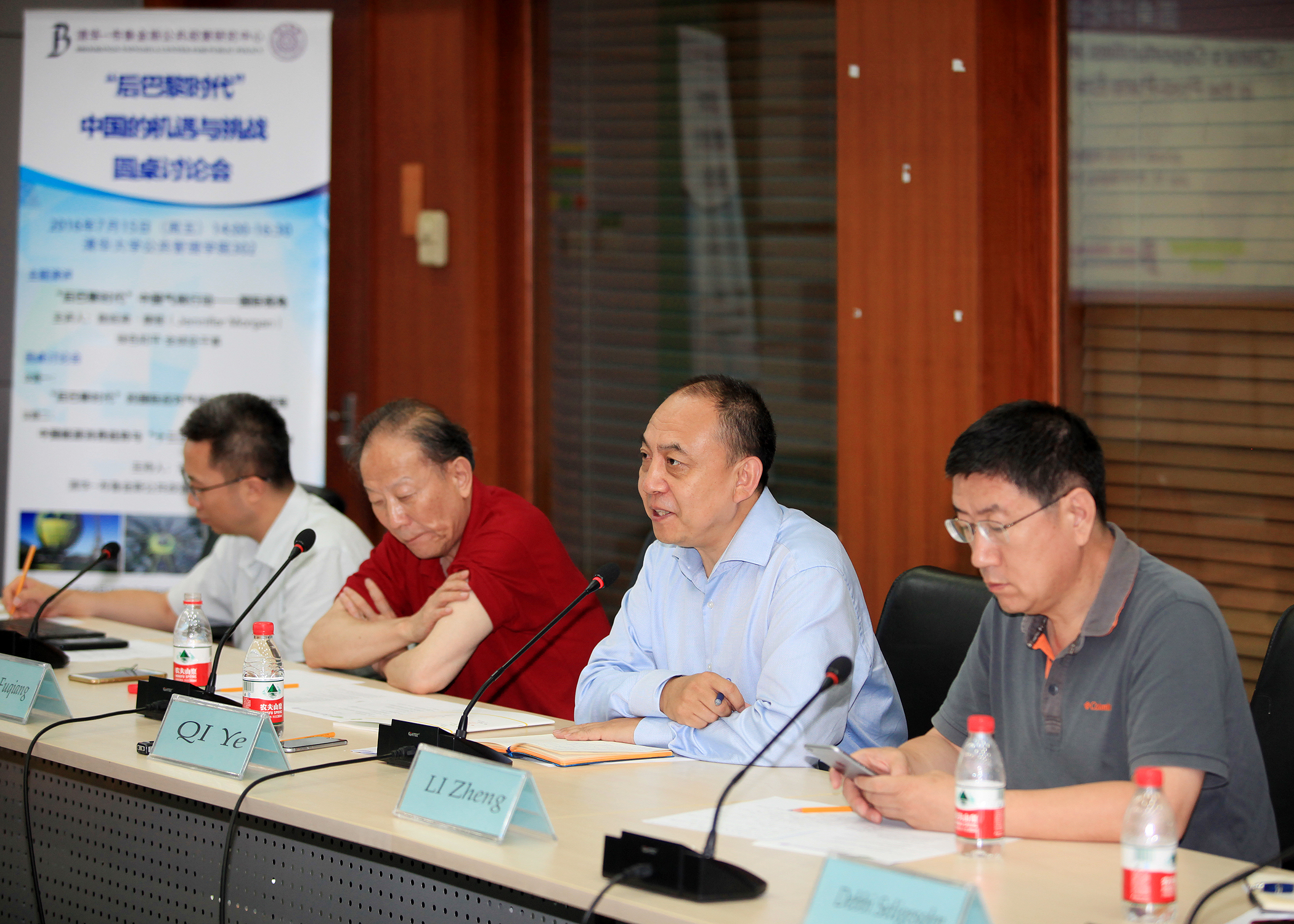 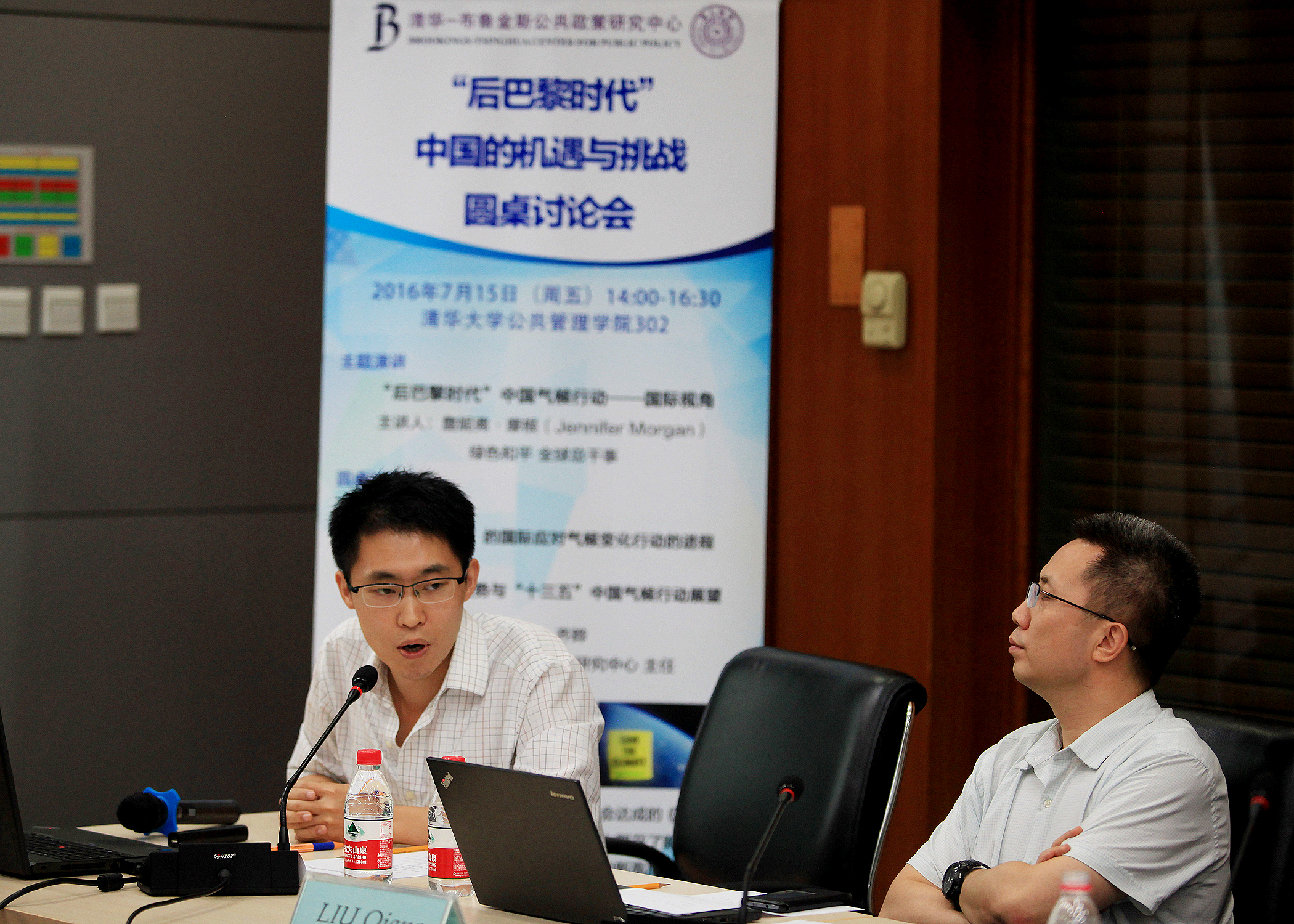 Li Shuo spoke at the panel 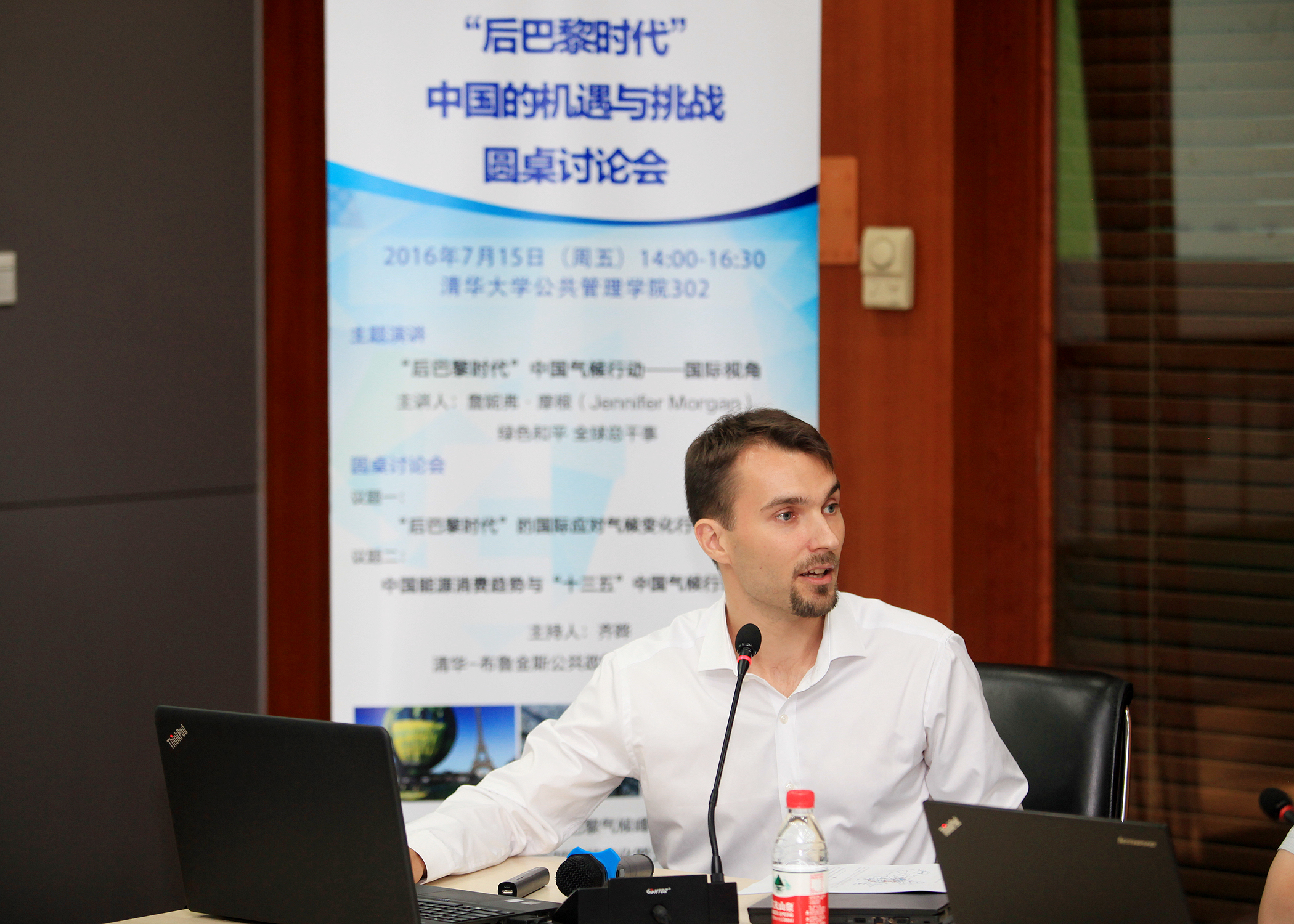 Lauri Myllyvirt spoke at the panel 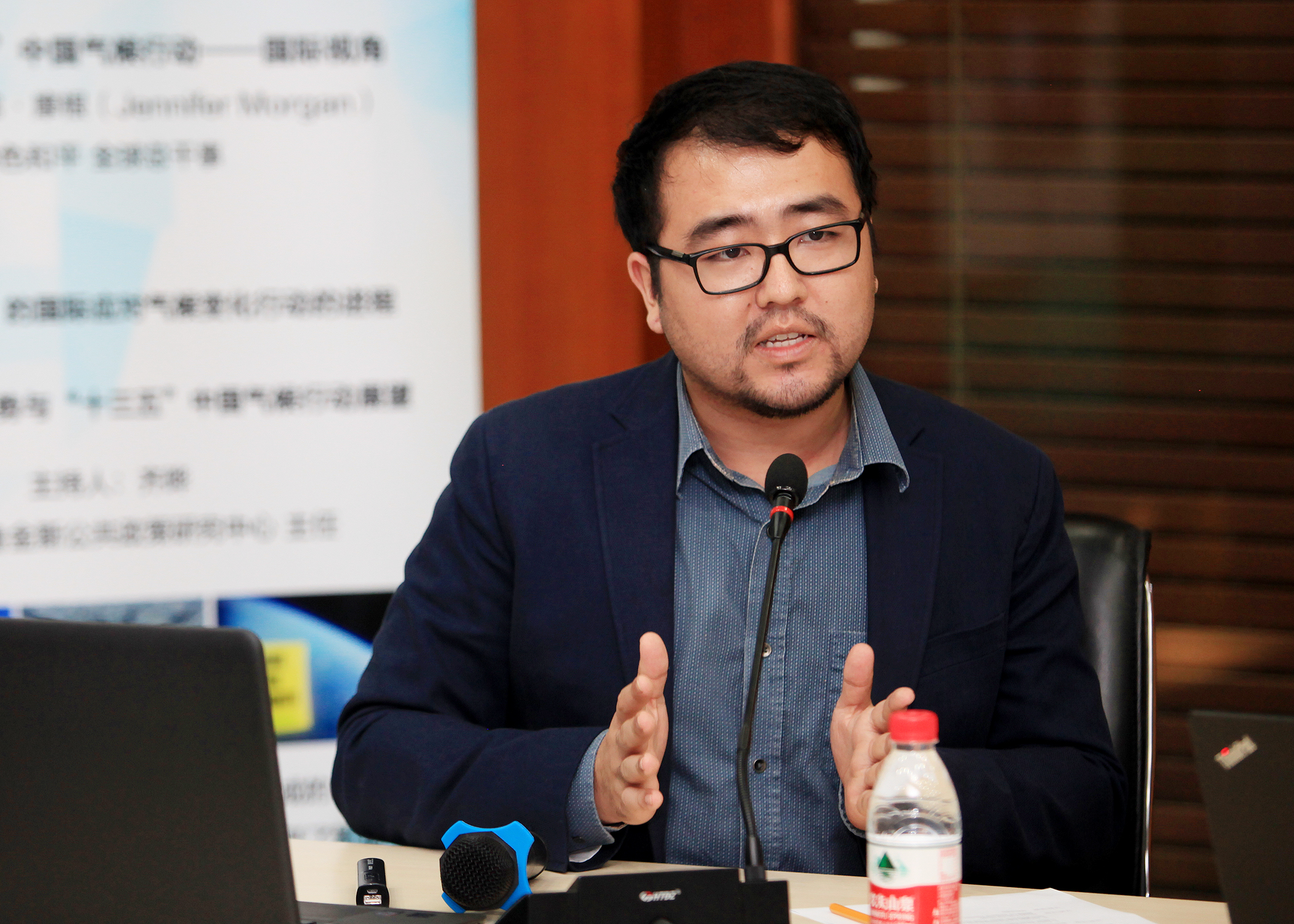 Jiaqi Lu spoke at the panel

On July 15, 2016, the Brookings-Tsinghua Center for Public Policy hosted representatives of Greenpeace at a roundtable on “China’s Opportunities and Challenges in the Post-Paris Era”.