Contraception and women’s health are issues that often garner national attention, and may again with  the Pope Francis’ historic visit to the U.S this week  Presidential elections also draw attention to women’s health ­­­–– in the 2012 presidential race, the issue of mandated coverage for birth control through the Affordable Care Act (ACA), often referred to as Obamacare, became the subject of a Supreme Court case. GOP candidates in the current bid for their party’s nomination have similarly made contraception a central issue, and Congress is considering shutting down the government in an effort to defund Planned Parenthood after the emergence of many hidden camera videos which record the organization’s officials discussing the donation of fetal tissue.

Fetal tissue research and the reimbursement of expenses related to handling and transportation of the materials is legal (read this FactCheck article on why) and largely supported by the medical and academic communities, as well as past political leaders. The videos became the impetus to resurrect debates regarding women’s health and religion versus science from both sides of the aisle.

Given the importance of access to contraception, women’s health, and the significant political attention it is receiving during the Pope’s visit and the current presidential race, let’s take a deeper dive to explore what the evidence tells us about contraception. In this blog, we will focus primarily on hormonal contraception, the most commonly used form of contraception, in America (including emergency contraception, although some, particularly those of certain faiths, consider this a form of abortion because they believe life begins at conception.  However, the Association of Reproductive Health Professionals distinguishes emergency contraception from a medical abortion).

What does the evidence say?
Let’s review some common questions and concerns about contraception, and what the evidence so far suggests.

1. Use of hormonal contraception promotes teenage sexual activity, leading to more pregnancies and live births in the United States. 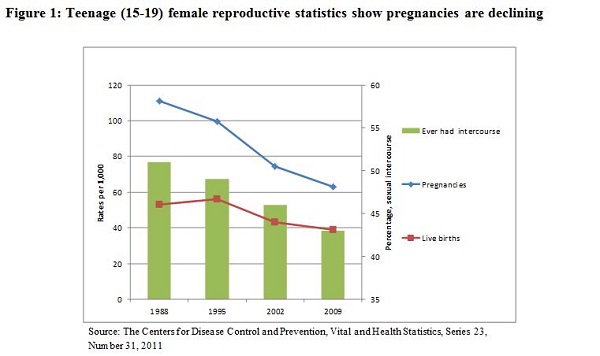