Studies in this week’s Hutchins Roundup find that government mortgage guarantees have little effect on homeownership, output losses after the 2008 crisis persist, and more.

Output losses after the 2008 financial crisis appear to be persistent

Wenjie Chen, Mico Mrkaic and Malhar Nabar from the International Monetary Fund study the growth of output, investment, and employment across 180 countries after the financial crisis. They show that most countries have experienced persistently slow growth, weak investment, and low productivity since 2008. But policy choices both before and in the immediate aftermath of the crisis matter, they say. Countries with stronger banking regulation were less likely to experience a banking crisis in 2007-2008, and countries with stronger pre-crisis fiscal positions and those that moved quickly to recapitalize their banks— either though capital injections and debt guarantees—had more moderate output losses following the crisis. One worry is that the large accumulation of public debt across most countries in recent years has eroded fiscal buffers, leaving countries with limited defenses against the next downturn, the authors say.

Felipe Benguria of the University of Kentucky and Alan M. Taylor of the University of California examine whether financial crises are shocks to demand or to supply. The authors develop a small open economy model in which households and firms are both subject to credit shocks, and calibrate it to over 200 years of international trade and price data. They find that after a financial crisis, imports of both final and intermediate goods contract, exports hold steady or even rise, and the real exchange rate depreciates—patterns that are consistent with the effects of a demand-side shock in their model. The results hold across developed and developing countries and remain stable over time. The authors conclude that on average, financial crises are very clearly a negative shock to demand.

Chart of the week: The yield curve has steepened after a period of flattening

*Note: the yield curve is the difference between the cost of borrowing at a longer versus shorter term. 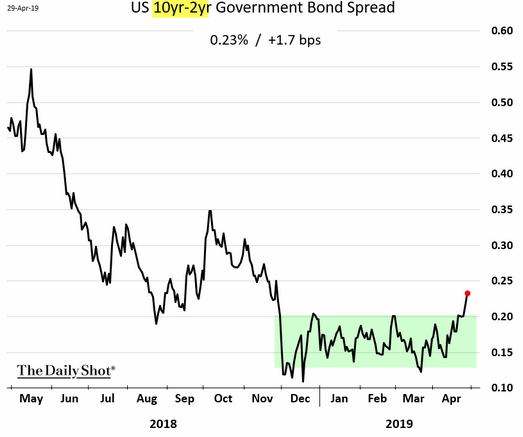 “I would like to consider buying a book on Amazon using a credit card. Who should own the transaction data – myself, Amazon or the credit card company? Should companies be allowed to match my transaction data with personal information from my linked devices? What should they be allowed to do with such data? These are questions with both an ethical and economic angle. For instance, data ownership is already severely concentrated among a few big firms, giving them an excessive degree of market power. And, in many cases, customers are blissfully unaware of how their data are being used,” says Agustin Carstens, General Manager of the Bank for International Settlements.

“Dealing with these issues is complicated by the inadequacy of existing rules. So far, the policy response has been uncoordinated. Some countries have passed, or are considering, data privacy laws. Among these are Australia, the EU, Singapore and Switzerland. To increase data portability and foster competition, an increasing number of countries are also adopting some form of ‘open banking’ requirement. The core idea is that consumers should have the right to authorize a third party, such as a fintech firm, to access their financial data. The fintech firm would then use the data to offer competing financial services.”