Studies in this week’s Hutchins Roundup find no change in nurses’ earnings in states that adopt multistate licensing, real exchange rate depreciation can have a strong positive effect on growth in developing economies with fixed exchange rate regimes, and more.

For nurses, multistate licensing does not reduce labor market frictions

Using data on over 1.8 million nurses and other health care workers, Christina DePasquale of Emory and Kevin Stange of the University of Michigan conclude that the Nurse Licensure Compact – legislation adopted by twenty-five states permitting registered nurses living in member states to practice across state lines – had no effect on nurses’ labor force participation, employment levels, hours worked, earnings, or likelihood of working across state lines – even for nurses who live near the border of another state that permits multistate licensing. The authors caution that their measures do not capture such alternative work arrangements as telenursing or working in more than one state simultaneously.

The real exchange rate does matter for growth in developing economies; substantially less so in advanced ones

Using data on over 150 countries for 1970 to 2010, Maurizio Michael Habib, Elitza Mileva, and Livio Stracca of the European Central Bank find that real depreciation of the exchange rate can have a bigger positive effect on real per capita growth (and real appreciation can have a bigger negative effect) than earlier estimates in the literature suggest. This effect is visible only in developing countries and those that peg their exchange rates to another currency, not in advanced economies or those with floating exchange rates. They also find that large depreciations appear to have a stronger impact than large appreciations, on average.

John Tauras, Jidong Huang, and Frank Chaloupka of the University of Illinois, Matthew Farrelly of the Research Triangle Institute, and Michael Pesko of Cornell, analyzing state-level data from 1991 through 2012, find that the effects of state cigarette tax increases depend heavily on the starting price of cigarettes. A tax increase that raises the price of a pack of cigarettes by 10 percent, they find, will generate less revenue but reduce smoking more in states in which cigarettes cost more than the national average, compared to states with cigarette prices below the national average, where the same-sized tax increase will produce more state revenue but fewer people will quit smoking.

Chart of the week: The top 1% saw their income grow far faster than others over the past three decades 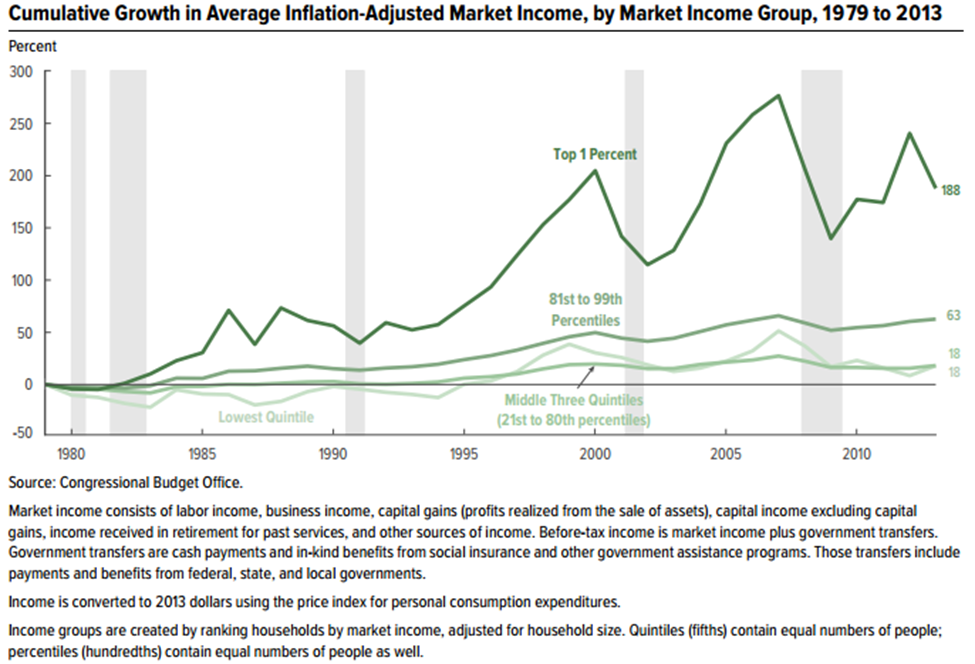 Quote of the week: “[T]here is quite some scope for productivity catch-up through adopting digital technologies,” says ECB President Mario Draghi

“So the debate that is currently raging among US economists about whether the great waves of technological innovation are now over is, for the time being, less relevant. For the euro area the key question is how to create the conditions for more firms to move towards the productivity frontier. What is more, the secular shift from manufacturing to services can be consistent with higher productivity if resources are well allocated. In fact, there are very large differences between the most and least productive firms within each sector, even more so than across sectors. This implies that, even in a services-oriented economy, aggregate productivity can still be improved. So the euro area faces a twin policy challenge: to get more firms in each sector to the productivity frontier, and to get more labor and capital to those productive firms. And crucially, this would not only boost output, but also employment and wage equality, since labor would be concentrating in firms that are both growing and demanding higher value skills.”