Gopi Shah Goda and Jay Bhattacharya of Stanford and Monica Farid of Harvard estimate the effect on wages of the Affordable Care Act’s requirement that employers provide health insurance for their workers’ children up to age 26. (Most previously cut off coverage at age 19.) With data from states that imposed such requirements before the ACA, they find that the requirement cut wages for all workers at firms that provide health insurance—not just those with children—by about $1,200 per year, but don’t find any reduction in labor supply.

Emmanuel Farhi of Harvard and Nobel laureate Jean Tirole of Institut d’Economie Industrielle argue external bank supervision, such as the European banking union: 1) holds fragile states to higher supervision standards than they’d maintain on their own and, because it reduces risk of taxpayer bailout, lowers sovereign borrowing costs; 2) reduces incentives for foreign banks to take advantage of  lax supervision in other countries; and 3) decreases the probability stronger states will have to come to the rescue of neighbors with banking crises.

Lars Svensson, currently at the International Monetary Fund, says it is a mistake for central banks to try to lower the likelihood and size of future financial crises by maintaining higher interest rates than warranted given their other objectives (“leaning against the wind”). Svensson argues that previous studies, which found costs in the short term but benefits in the long-run, didn’t sufficiently take into account how such policies weaken the economy initially, and how that weakness amplifies the effects of crises that do occur. Svensson also disputes the notion that central banks are justified in leaning against the wind as a last resort when macroprudential policy is ineffective. (See here for a shorter version.)

Chart of the week: Not so many gigs? 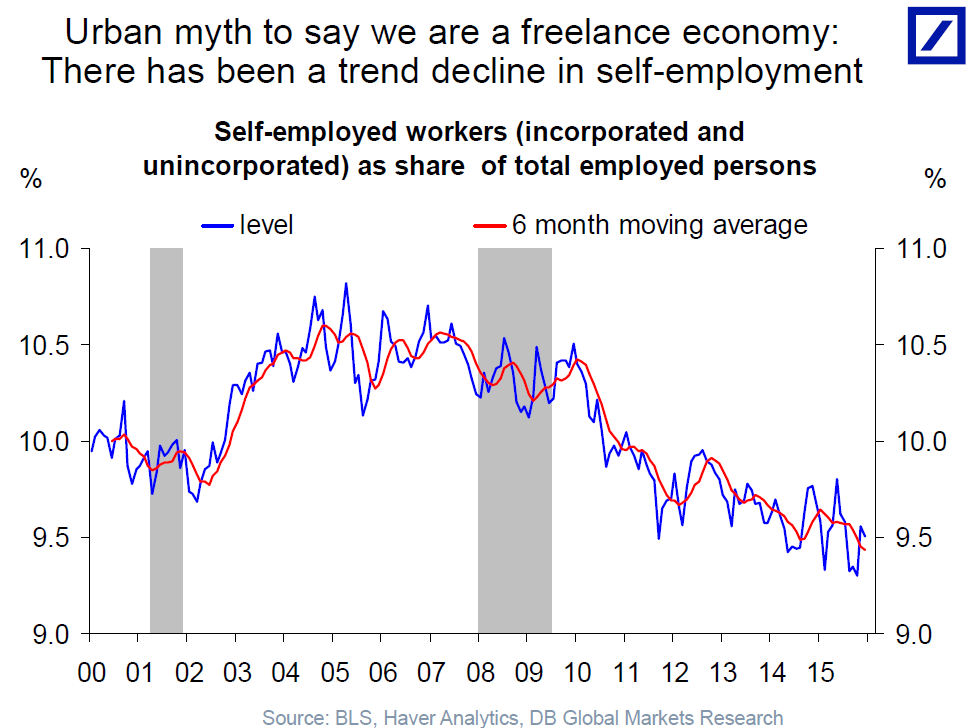 Quote of the week: A little inflation is good for the economy’s heart

“The inflation side of the equation is the dark end of the street. For those of us who lived through the ’70s and ’80s, the idea that we need higher inflation may seem strange, but that’s where we are right now. Inflation is like wine—a little bit is actually good for you. And right now our glass isn’t full enough.”