Using detailed administrative data, Stanford University’s Maria Polyakova finds that reducing the cost of switching between Medicare Part D plans could produce gains for consumers of up to $400-$600 per year by promoting better matching between beneficiaries and plans. Polyakova adds that, while a substantial amount of adverse selection appears to exist in Medicare Part D, the resulting cost to consumers is likely moderate, at roughly 1 percent of annual per capita spending.

Tax competition across states has a meaningful impact on economic activity

Using establishment-level data on firms with establishments in multiple states between 1977 and 2011, Xavier Giroud of MIT and Joshua Rauh of Stanford University find that, among firms organized as C corporations, an increase in a state’s corporate tax rate was associated with a reduction in the level of employment and number of establishments per corporation in that state. An increase in personal income tax rates had a similar effect on pass-through entities, but to a lesser degree. The authors note that about half of the reduction is offset by a reallocation of resources to other states, suggesting that tax competition across states has an economically meaningful impact.

Improving physical condition of schools does not improve student achievement

Analyzing data on roughly 1,400 locally funded capital campaigns to improve the physical condition of schools in Texas over a 14-year period, Francisco Martorell of the University of California, Davis and Kevin M. Stange and Isaac McFarlin of the University of Michigan conclude that these investments had little to no impact on student achievement, even for campuses undertaking the largest renovations.

Chart of the week: Federal revenues grow faster than spending in first 11 months of fiscal year 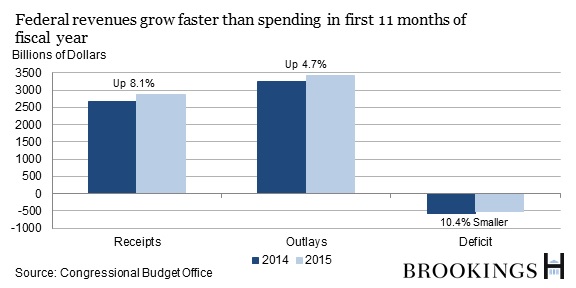 Poem of the week:

Peter Olson, a research analyst at the Hutchins Center, is, among other things, a poet. Here’s his take on next week’s meeting of Fed policymakers: 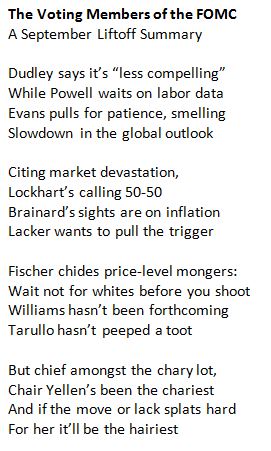