Jonathan L. Willis and Guangye Cao of the Kansas City Fed find that, prior to 1985, a 0.25 percentage point reduction in the federal funds rate was associated with a roughly 0.2 percent increase in employment over the following 2 years—255,000 jobs in today’s market—but that the same rate cut today has almost no impact on employment. The authors argue that this is due to a weaker link between short- and long-run interest rates and a general shift in employment from interest rate sensitive industries like manufacturing and construction to less sensitive service providing sectors.

Analyzing data on 80 democracies between 1975 and 2012, Sanjeev Gupta, Estelle Liu, and Carlos Mulas-Granados of the International Monetary Fund find that growth in public investment spending is highest at the beginning of election cycles—peaking roughly 2 years prior to an election. Spending slows as the election approaches and incumbents favor more visible short-term spending. The authors note that political systems with a larger number of parties experience smaller increases in public investment, while left-leaning incumbent parties are associated with larger increases.

Sumit Agarwal of the National University of Singapore and co-authors find that for every $1 increase in credit limits, households with low credit scores increase total borrowing by 58 cents over the ensuing year. Households with high credit scores exhibit no change in total borrowing. In addition, the authors note that reducing the cost of funds for banks has a large positive impact on the credit limits of high credit score households, but only small effects on the credit limits for low credit score households. Together, these findings suggest that policies designed to stimulate household borrowing by expanding bank credit provides the least amount of credit to those who want to borrow most. 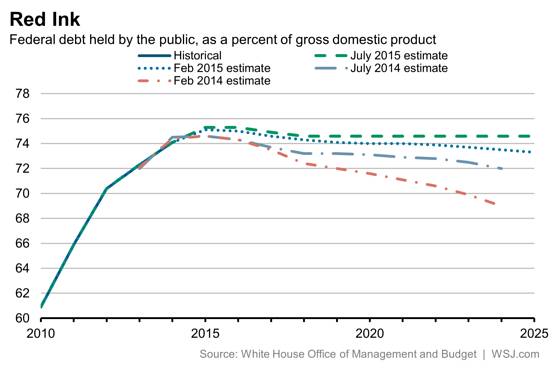 Quote of the week: Excessive reliance on the ECB shows a “serious weakness in the institutional functioning of the euro area”

The role of the ECB in the Greek crisis has been heavily criticized. Some accuse it of having suffocated the country’s banks, others of having helped them too much. Who is right?

We are the central bank for the 19 countries of the euro area, including Greece. That is our mandate and we have never strayed from it. Since the end of 2014, the amount of liquidity injected into the Greek economy by the Eurosystem has increased from €40 billion to €130 billion. We have taken care that our actions are never a replacement for the political decision-making process. That people are turning to the central bank on issues that demand a political rather than technical response reveals a serious weakness in the institutional functioning of the euro area. This weakness fuels excessive expectations concerning the ECB.

Is high inflation here to stay?