In its new World Economic Outlook, the International Monetary Fund projects that, over the next six years, potential output growth in advanced economies will increase slightly over current rates, but will remain below pre-crisis rates. IMF staff estimate that potential output growth will average 1.6 percent per year over 2015-2020, up from 1.3 percent over 2008-2014, but significantly lower than the 2.2 percent experienced over 2001-2007.

Xavier Giroud of MIT and Holger M. Mueller of New York University find that highly leveraged firms outside of finance cut jobs significantly more during the Great Recession than other firms. In fact, all of the job losses associated with falling house prices were accounted for by establishments of highly leveraged firms.

Using data on the introduction and expansion of three federal higher-education tax credits, George B. Bulman of the University of California, Santa Cruz and Caroline M. Hoxby of Stanford University find that these tax credits, amounting to $23 billion in 2014, had little to no impact on college enrollments. The authors suggest that this may be because the credits are offset by decreased financial aid or increased tuition and fees, because those eligible are not liquidity constrained, or because the credits are structured in a way that minimizes their impact.

Chart of the week: Wage growth since the Great Recession much slower than in past recoveries 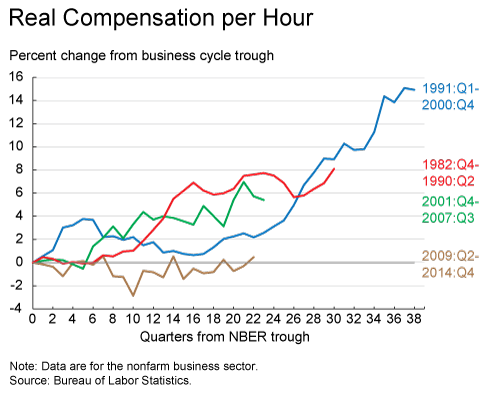 Quote of the week: Our generation must be fiscally responsible so that we do not “mortgage the future of our children”

“[M]ore likely than not, it is the next generation and the next and the next that will have to shoulder the costs and to suffer the pains for excessive spending and stockpiling of debts by the current generation. If we don’t want to mortgage the future of our children and grandchildren, try not to leave with them a pile of debts as in the case of many developed countries”
–Norman T L Chan, Chief Executive of the Hong Kong Monetary Authority