Editor’s Note: In this blog, Joshua Meltzer discusses the role of cross-border data flows and the Internet in bilateral trade and investment opportunities for the U.S. and EU. For a more detailed look at this topic, see his latest paper.

The most globally significant bilateral trade and investment relationship is between the U.S. and the European Union.  An increasing amount of this economic relationship is underpinned by cross-border flows of data.

Whether the U.S. and the EU are able to take full advantage of the opportunities for international trade and investment presented by their increasingly online and digital populations will affect transatlantic economic relations. As the world’s two largest economies, the U.S. and EU decisions on support for cross-border data flows will also have global implications.

A recent paper of mine analyzes the importance of the Internet and cross-border data flows for US and E.U trade and investment with each other and globally.

Submarine Cable Bandwidth (in Terabits per second, or TBPS) 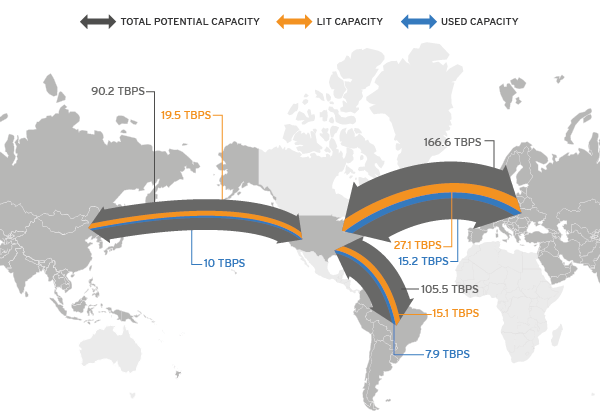 The Internet and cross-border data flows are providing opportunities for small and medium-sized enterprises (SMEs) to participate in the global economy.[1]  SMEs can now use the Internet to reach customers globally wherever they have Internet access, process international payments, and, for a range of digital products, deliver them online. For instance, SMEs on eBay are almost as likely to export as large businesses and have a 54 percent survival rate compared with offline businesses (24 percent).[2]

The Internet is also giving SMEs access to business services that can increase their productivity and global competitiveness.  This includes online functions like Google search, which helps businesses develop market intelligence on competitors and learn about foreign laws and regulations. The cloud provides access to low-cost software on demand and data flows allow for regular updates and security patches.  The Internet also provides opportunities for businesses to become part of global supply chains by providing discrete tasks.

In addition, businesses are increasingly using the Internet in innovative ways.  For instance, the Internet has given companies the ability to harness the intelligence of users by interacting with customers, suppliers and other stakeholders in product development efforts. Crowdsourcing is another evolving Internet-based opportunity that allows people situated globally to contribute tasks or become co-creators.[3]  All of these new business models require data and information to move freely across borders.

There are no direct statistics that measure the value of transatlantic trade underpinned by data flows.  Measuring digitally deliverable services—understood as services that may be, but are not necessarily, delivered digitally,[4] reveals the capacity for the Internet to drive US-E.U. trade.  For instance, in 2012, 72 percent of US services exports to the EU worth $140.6 billion were of digitally deliverable services. 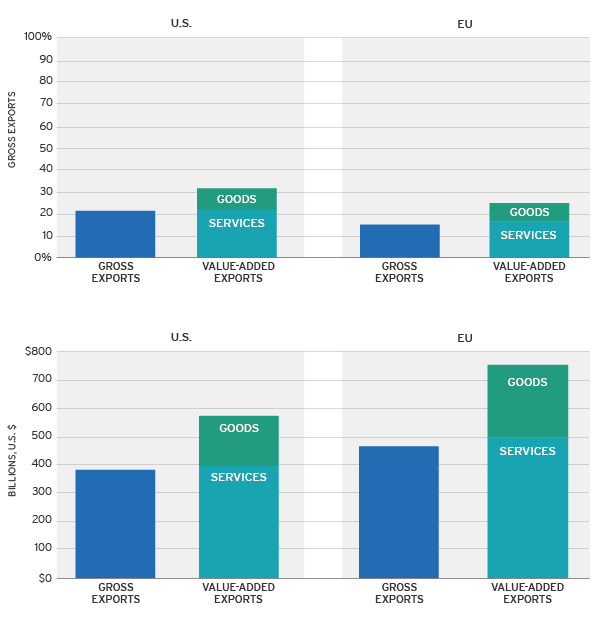 Source: U.S. Bureau of Economic Analysis and Eurostat. For the EU, VA shares are from the most recent 2009 input-output tables, applied to 2012 gross exports.

It is also the case that a lot of U.S. imports of digitally deliverable services from the EU are used to produce goods and services that are then exported.  This is increasingly the case in a world of global value chains; goods and services cross borders multiple times to produce a final product. WTO Director-General Pasqual Lamy has described this phenomenon as goods being “made in the world.”[5] 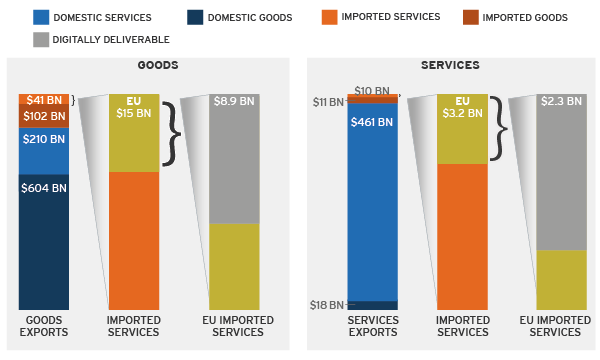 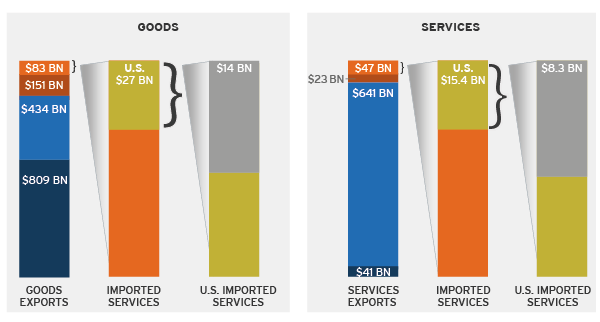