In new research funded by the Social Security Administration, I consider whether an aging workforce has dragged down average worker productivity over the past quarter century. At least so far, the answer is an emphatic “No.” Improved education among the population past 60 and delays in retirement among better educated Americans have tended to boost the earnings of older workers compared with younger ones.

Using one standard benchmark of individual worker productivity—hourly wages—workers between 60 and 74 now earn more than an average worker who is between 25 and 59. The hourly pay premium for older men was about 22 percent in 2011. For older women it was about 10 percent. Other earnings benchmarks show a somewhat less favorable picture, but all of them show considerable improvement in the relative position of aged workers compared with the nonaged over the past two decades. None of the indicators of male productivity suggest that older male workers are less productive than average male workers who are between 25 and 59.

There are two main reasons for the surge in older workers’ earnings. First, the sheer size of the baby boom generation means that the number of Americans attaining age 60 each year is climbing steeply (see Chart 1). Second, labor force participation rates of adults between 60 and 74 have increased. The share of all labor income earned by older workers has soared in recent years because these workers have enjoyed faster wage gains than workers who are younger. It is crucial to understand why this is the case. A major reason is that older workers are now better educated compared with prime-age workers than was the case in the past. Twenty-five years ago the gap in education between prime-age workers and older Americans was large. Americans past 60 had much less schooling than workers who were younger. That gap is now much narrower. 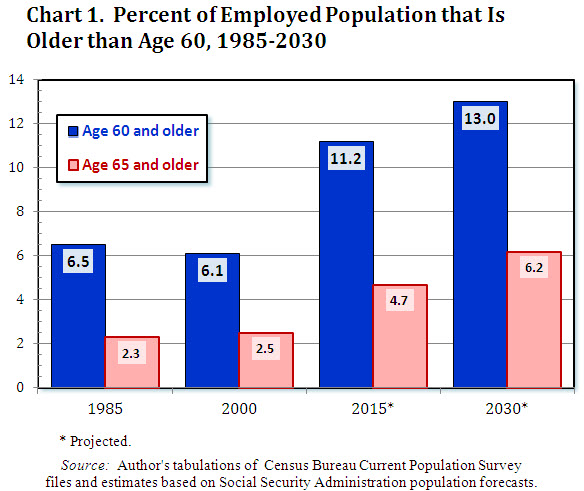 Educational attainment is also important for understanding the increase in Americans’ labor force participation rates at older ages. At older ages there are major differences between the participation rates of highly educated and less educated people, and these differences have persisted and even widened in recent several decades (see Chart 2). In the early 1990s nearly 60 percent of 62-74 year-old men with doctoral and professional degrees were still in labor force. In contrast, only 20 percent of male high school dropouts the same age remained in the workforce. The participation-rate gap was smaller for older women, but it was still sizeable and it has grown over time. 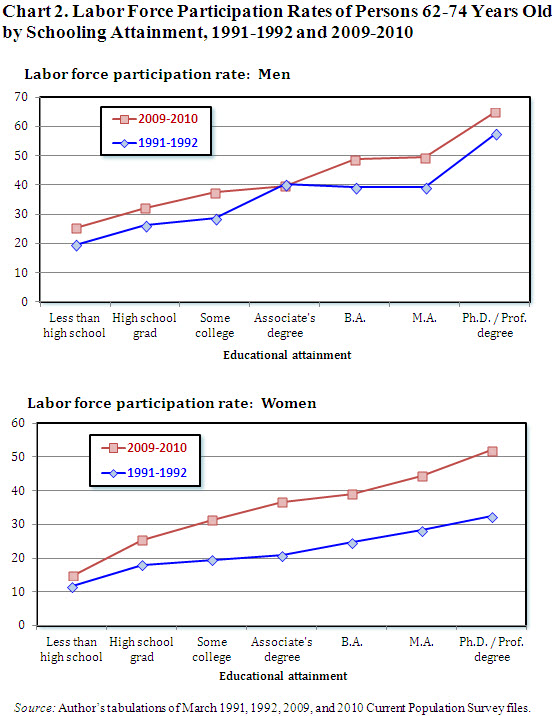 In the past quarter century there has been a steady improvement in older Americans’ educational credentials, both absolutely and in comparison to the qualifications of younger cohorts still in their prime working ages (see Charts 3 and 4). The improvement in older Americans’ educational attainment has improved their job market position. This is especially true for the men and women who remain in the workforce, because older Americans who stay attached to the labor force after 62 are much more likely to have received schooling after high school than the workers who retire at younger ages. 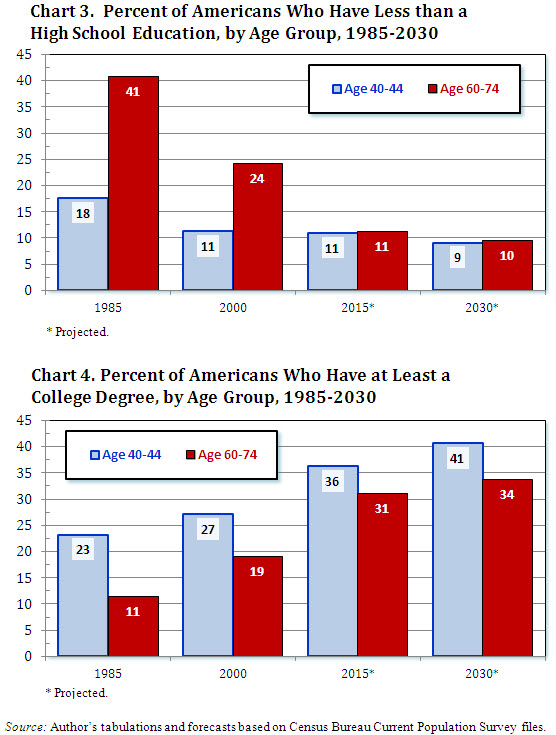 Changes in the distribution of educational attainment have influenced the age profile of earnings. Older workers now receive much better compensation compared with their prime-age counterparts (see Chart 5). Workers younger than 50 have seen a modest decline in their relative annual earnings, but workers past 55 have enjoyed impressive relative earnings gains. Compared with the earnings of an average 35-54 year-old worker, the average worker between 65 and 69 has seen his or her earnings climb 30 percentage points. Workers between 70 and 74 experienced a 28-percentage-point gain in their relative earnings. As noted, the relative earnings gains of older workers can be traced to the improvement in their educational attainment compared with younger workers. However, this development does not fully explain their gains. When I separately tabulate the age-earnings profiles of workers within each educational group I find similar, though generally far smaller, income gains among workers in the oldest age categories. 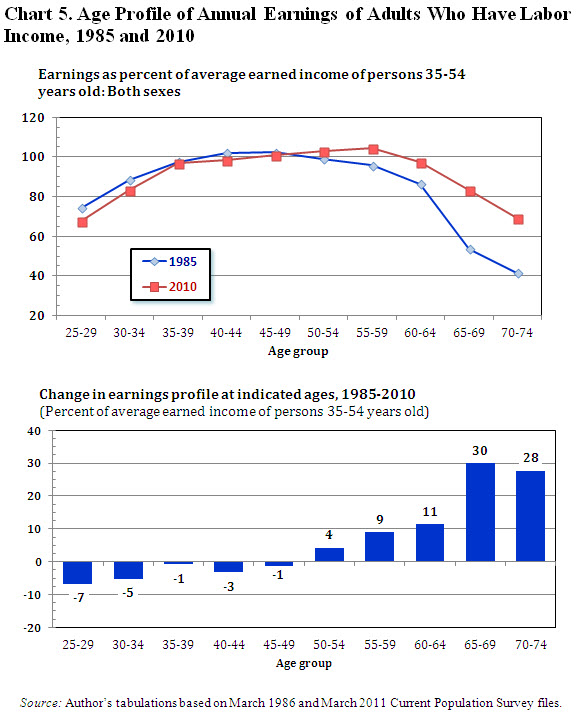 What has been the impact of older workers on workforce productivity? If worker productivity has been harmed by the surge of older workers into the labor force the fact is not evident in the earnings statistics for the elderly themselves. The average worker between 60 and 74 now earns a higher hourly wage than workers who are between 25 and 59 (see the top panel of Chart 6).  The hourly earnings premium enjoyed by older men and women has increased steadily since the turn of the century. The gains are equally impressive when we consider trends in annual labor income (wages plus self-employment earnings). The average annual earnings of working men between 60 and 74 is now slightly higher than that of men age 25-59. The yearly earnings of women between 60 and 74 is currently about 11 percent below that of working women between 25 and 59, but the gap is much narrower than it was at the turn of the century, when older women earned 28 percent less than their younger counterparts. 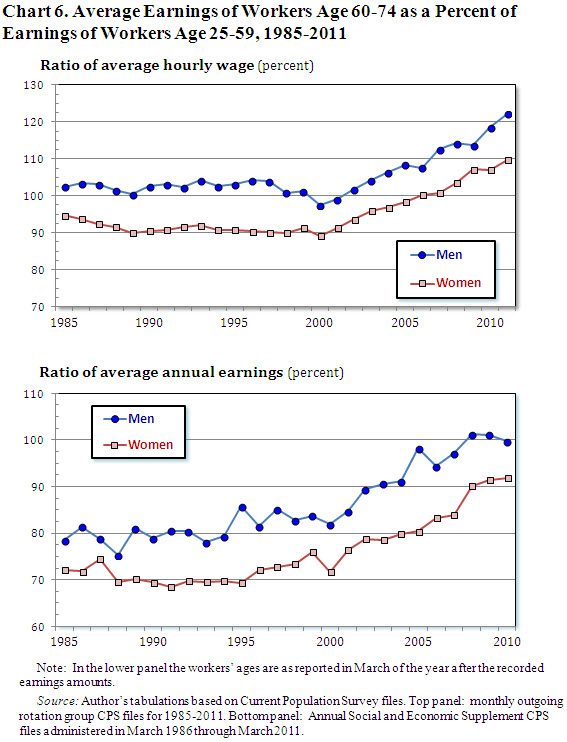 The expectation that older workers will reduce average productivity may be fueled by the perception that the aged are less healthy, less educated, less up-to-date in their knowledge, and more fragile than the young. While all these images of the elderly are accurate to some degree, they do not necessarily describe the people who choose to remain employed at older ages. My research shows there are enormous differences between the labor force participation rates of older Americans depending on their level of schooling. People with limited education have low employment rates in old age. People with college and advanced degrees tend to remain in the workforce longer. If less productive workers selectively exit the workforce at younger ages, the average productivity of the older workers who remain may compare favorably to the average productivity of the young. A surge in the percentage of the potential workforce that is old may simply increase the proportion of the workforce that consists of comparatively skilled older workers.