The Occupy Wall Street crowd is seemingly ubiquitous across much of America. But it is not surprising that these groups, mostly made up of young adults, are congregating in cities known to be friendly to twenty- and  thirtysomethings as confirmed by new Census data on migration.

Previously data showed that rates of migration declined as the recession began and places that grew the most during the fat part of last decade—both states and metropolitan areas—saw those gains begin to evaporate. But the American Community Survey’s new data for the years 2008 through 2010, inclusive, provides the first clear glimpse of migration gainers and losers during the Great Recession and permits a comparison with the three previous economically supercharged years. It also allows for a clean “before and after” comparison of destinations for young adults, whose preferences may differ from movers in general.

Beyond the “occupiers” concerns about lost job prospects and presumed corporate greed, recent demographic data on homeownership declines, delayed marriages, and doubled-up households show that the lives of many young people have been put on hold.  The new migration data show something else as well. To the extent they are moving at all, young adults are headed to metro areas which are known to have a certain vibe—college towns, high-tech centers, and so-called “cool cities.”

In the subsequent recession years, Riverside moved from first to eighth, gaining less than one-quarter of the young adults it drew during the bubble. Phoenix descended from second to 17th and Atlanta from third to 23th, each barely gaining any young adults. All three of these areas were magnets for jobs, but also affordable housing—perfect places for young people to jump start careers and families. 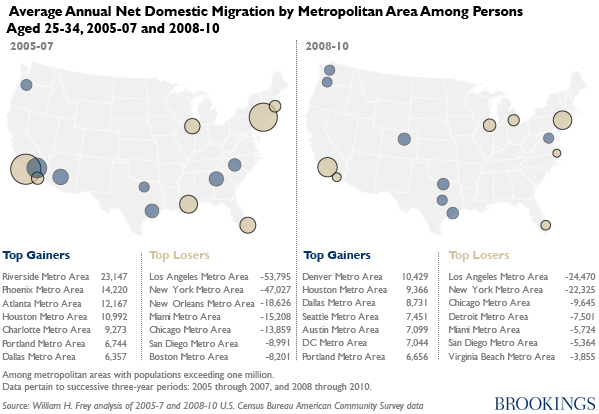 The double whammy of the mortgage meltdown and unemployment surge changed all that. While young people are moving less than before, it is interesting to see where those who did move went. Heading the list are Denver, Houston, Dallas, Seattle, Austin, Washington D.C., and Portland. The top three areas and our nation’s capital, arguably, fared relatively well economically during the recession. But all seven are places where young people can feel connected and have attachments to colleges or universities among highly educated residents.

Young people’s destinations differ sharply from the top migrant draws for all ages combined—where Phoenix and Riverside still rank in the top three, though gaining fewer migrants than mid-decade.

While not top gainers before, some of these metro areas were upper-tier magnets for young people in the mid-2000s as well. Yet they ascended to the top even as overall youth mobility declined and migration to the other high-flying metros dropped dramatically. Two on the list gained markedly in rank among young movers: Denver, which moved from twelfth to first, and Washington D.C., which improved from 44th to sixth.

At the other end of the spectrum were metro areas that were bleeding young people at the middle of the decade, as the promise of jobs and affordable housing lured them east from coastal California and south from the Northeast megalopolis. Now, these areas, including metro New York, Los Angeles, San Francisco, and Boston have shown sharp declines in their young adult losses. Some potential migrants are holding tight, waiting for the next boom to come, but others may just choose to remain in these metros that have long held appeal to young people.

There is no doubt that the current economic doldrums are leaving many young people in limbo—some on city streets outside financial institutions and stock exchanges–waiting for employment and housing opportunities to emerge. When the economy does eventually pick up, they will follow the jobs, no doubt, wherever they become available. In the meantime, a select group of metro areas with modestly growing economies, and strong youth cachet, seem to be the places where they are riding out the downturn.

Yangyang Cheng, Ryan Hass, and Jude Blanchette
Monday, May 23, 2022
How We Rise