Newly released census statistics on cities through July 2014 allow us to make some firm observations about city demographic resurgence—depending on which cities we are talking about.

On the one hand, big cities continue to grow considerably faster than in the previous decade and earlier, providing fuel to those who believe that increased city living could be a signature trend for the decades ahead. On the other hand, city growth appears to have peaked, with growth slowdowns especially apparent in the nation’s most populous urban centers.

Evidence for a slowdown can be seen in the nation’s three largest cities: New York, Los Angeles, and Chicago (Figure 1). After experiencing very modest growth in 2000-2010, New York’s growth rate jumped to a peak in 2010-2011, then moderated in the three years 2012-2014. Los Angeles exhibited a similar post-2010 growth surge, peaking in 2012-2013 before slowing down more recently. Chicago saw the biggest turnaround from negative to positive growth over the two decades, though growth diminished in 2013-2014. 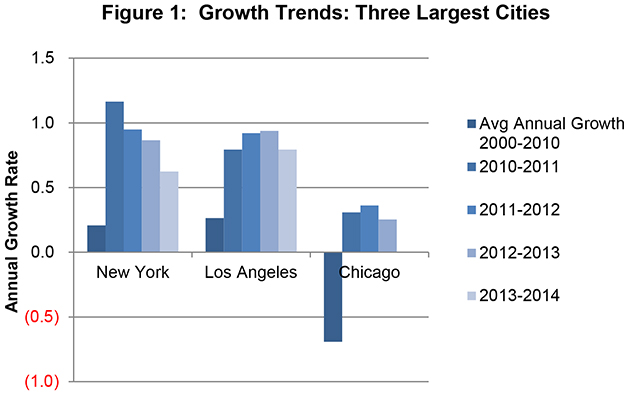 These three were not isolated cases. Seven of the 10 largest cities (Download Excel table) and 53 of the 81 cities with over a quarter of a million population experienced reduced growth levels in the most recent year, though they still mostly exhibited growth well above their average of 2000-2010.

One clue about why the slowdown is occurring can be gleaned from a look at the cities that are growing fastest. The six fastest-growing big cities include Austin, Texas; Orlando, Fla.; Durham, N.C.; Henderson, Nevada; Denver, Colo.; and Fort Worth, Texas, and each showed a recent uptick in its growth rate. (Download Excel table) These cities are located in Texas, the Southeast, and the Mountain West—Sunbelt regions that have experienced a recent re-emergence of growth that had stalled during the 2007-2009 recession and the immediate post-recession years.

Thus, there seems to be a regional shift taking some of the luster off coastal and northern cities and benefiting those in the reviving Sunbelt. Yet big cities in both regions are doing better than in the not-too-distant past. Whether this continues depends on how attractive cities are versus their suburbs for residents remaining in their regions.

The jury is still out on this one, according to an analysis of the new data. As with city growth per se, primary (central) cities of many large metropolitan areas have begun growing more rapidly than their surrounding suburbs, in sharp distinction with earlier decades. Some observers have interpreted this as an increased preference for city living, especially among young adults. Another explanation is that young adults had been heretofore constrained by the economy and reduced housing opportunities brought on by both the recession and the housing market collapse. 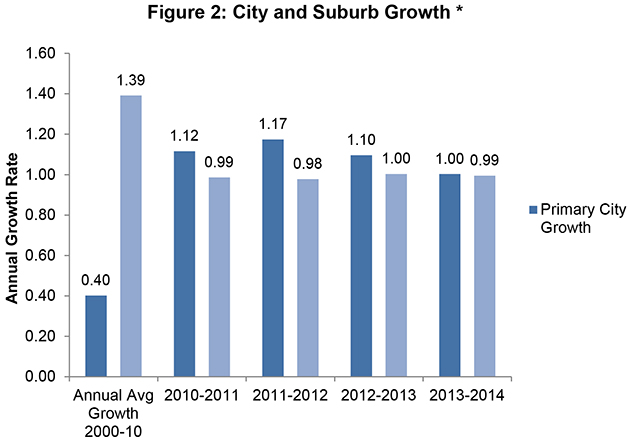 Emerging regional and suburban growth patterns suggest that both cities and suburbs in the Sunbelt region will be growing more rapidly. And despite the recent growth slowdowns, big cities almost everywhere are growing more rapidly than in the recent past. Yet the continued growth of large coastal and northern cities well beyond levels in the recent past can still not be assured. We will need a few more years to monitor this as the job and housing markets regain strength.