Our latest report on income inequality in cities finds that the gap between the rich and poor across the 50 largest cities continued to grow, albeit slightly, from 2012 to 2013. In general, both high- and low-income households made gains, but income growth at the top end outpaced that at the bottom end.

However, the cities in which either group made progress were, for the most part, different.

This was a little surprising. We thought that the cities in which wealthy households posted big gains might also see incomes improve the most for poorer households. Top-earning households would use their additional discretionary income to purchase more local goods and services that, in turn, employed lower-income workers—restaurants, landscapers, house cleaners, child care providers, etc.

That’s one logical implication from Enrico Moretti’s book, The New Geography of Jobs, which my colleague Mark Muro wrote about here a couple years back. Moretti finds that the most innovative, tech-focused regional economies actually generate more jobs and higher incomes for less-skilled workers than other regions. So at least in terms of employment and earnings opportunities, it’s better to be a poorer household in Silicon Valley than in, say, Milwaukee. 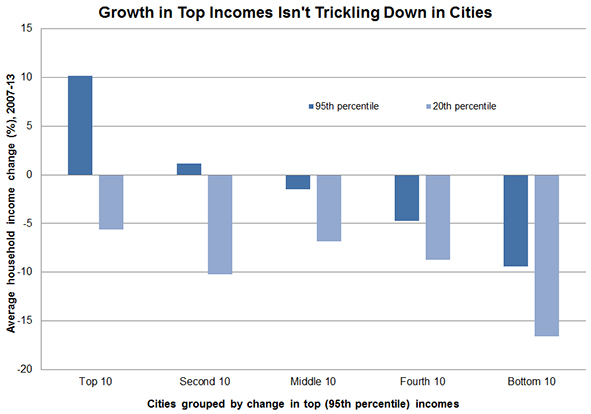 These small data points don’t refute the underlying theory. Our data are just for cities, not the wider metro areas across which these economic dynamics truly operate. And there are examples such as San Francisco, where very dramatic (albeit not quite statistically significant) income gains for top earners in 2013 coincided with real gains at the bottom, too. Of course, we don’t actually know whether the gains at the bottom reflected actual improvement for San Francisco’s poorer households, or if instead poorer households were simply displaced from the city due to rising housing costs (it’s probably some of both).

Regardless, the fact that where the rich are getting richer, the poor are often not, presents a challenge for local policymakers aiming to boost social mobility for their lower-income workers and families. In the short run, at least, rising prosperity at the top in a city won’t reliably trickle down to the bottom.

Narrowing the racial wealth gap using the EITC and CTC