Back in 2012, Atlanta made national news for rejecting a multiyear, multibillion dollar transportation referendum. Even with the region’s notorious congestion and spotty transit service, a mixture of political opposition and unclear objectives stopped the forward-looking proposal in its tracks.

On Election Day, voters in Clayton County easily passed a one-cent sale tax increase to fund transit improvements in the region’s fifth-most populated county. Investments made possible by this vote will better connect Clayton County households and businesses to economic opportunities, strengthening the entire regional economy in the process.

One could argue none of the country’s 10 largest metro areas has a greater need for improved transit service than Atlanta. As we showed in our work on how transit connects to economic opportunity, Atlanta’s various transit agencies connect the average worker to only 22 percent of regional jobs in 90 minutes. Those low transit access levels are especially troubling for the nearly 77,000 workers in the region without a car—and may help explain why 88 percent of Atlanta workers commute by car every day.

The situation was especially dire in Clayton County. Amid a serious budget crisis during the recession, the county eliminated its entire transit system. Considering that Clayton County bus service provided nearly 2 million passenger trips in 2008, the county’s sudden shift to a transit desert proved quite a shock (see the map below). Transit-dependent residents were effectively stranded, forcing them to find new ways to access employment, food, and other essential services. 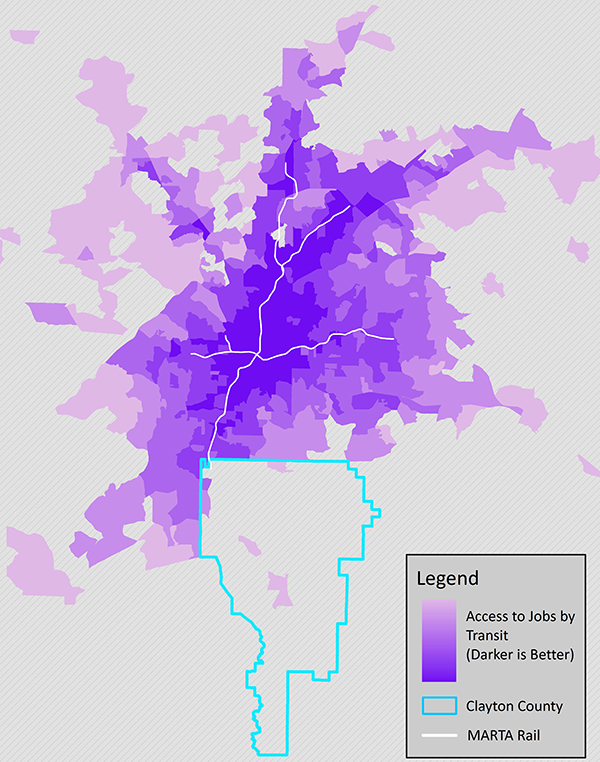 This week’s vote reverses that recession-era cut and brings Clayton County into the MARTA family. After originally refusing to join the region’s major transit agency in a historic 1971 vote, county residents will now enjoy true regional connections to fellow MARTA members DeKalb and Fulton counties. According to MARTA CEO Keith Parker, these new connections will include restored local bus service  and a long-planned rail extension.

While these new services represent a huge boon for Clayton residents and businesses, the network benefits will extend to the entire region. Workers in DeKalb and Fulton Counties will have access to jobs in Clayton County, and their businesses can expect better patronage from their southern neighbors. The recent ballot box win also suggests that other parts of the region should revisit their 2012 T-SPLOST plans and ask voters to fund inspiring projects like the Beltline.

The Clayton County vote also puts Atlanta into an important national group: metro areas using ballot measures to take charge of their economic futures. As Washington continues down the path of fiscal uncertainty, metro areas are looking to their voters for expanded transportation investment, often headlined by major transit projects. This kind of devolved leadership proves Americans want improved infrastructure—so long as they know what their money will buy.