Hiring difficulty is increasing in the United States. This is good for workers, because it signifies rising demand from employers. Yet the notion that companies are not immediately filling their vacancies—at a time when many are still unemployed—is generating confusion and even opprobrium directed at corporate America.

But in reality, the recent economic recovery has simply returned the labor market to its pre-recession state: a long-run shortage of skilled workers in fields requiring high levels of education or STEM knowledge.

There are two clear trends in hiring difficulty over the course of the recession and recovery. Job vacancies became much easier to fill during the recession, but started becoming harder as the economy rebounded. New evidence shows that this phenomenon is especially pronounced for high-skill jobs, for which hiring difficulty is most severe. The broad trend can be seen in the figure below, which plots an index of hiring difficulty based on the number of vacancies last month divided by new hires this month—using data from Job Openings and Labor Turnover Survey(JOLTS). 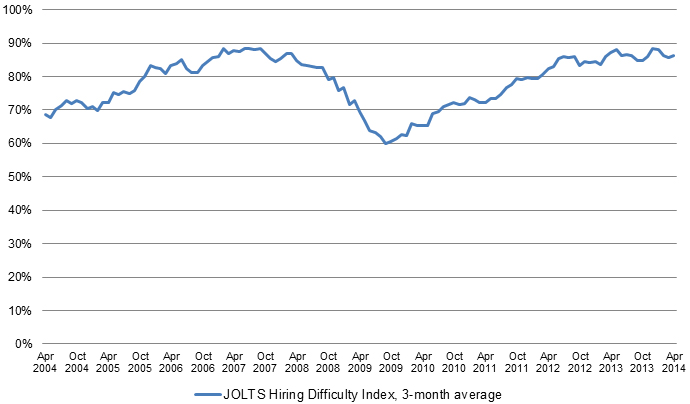 The obvious explanation for these trends is that hiring difficulty depends in large part on how many people are seeking work for a given level of vacancies. This theory is so well accepted by the economics profession that its leading proponents were awarded a Nobel Prize in 2010. As predicted, the hiring difficulty index from 2006 to 2014 is highly correlated with both the unemployment rate and the number of vacancies per unemployed worker. The same is true at the occupational level, where it is clear that STEM occupations have many vacancies per unemployed worker and low unemployment rates.

Yet, according to one influential argument made by Peter Cappelli from the Wharton School, human resource practices result in excessive hiring rigidity, and these standards were tightened during the recession because firms had so many workers to choose from. Prominent newspapers and journalists have jumped on board this “pickiness” hypothesis.

The evidence does not bear out Cappelli’s argument. As I documented in my recent study analyzing millions of job vacancies across thousands of companies, skilled jobs take longer to fill even within the same company and the same HR process. In the San Jose area, Google advertised jobs for computer workers for an average of 97 days, compared to just 56 days for sales occupations.

The wider trend also contradicts the “pickiness” hypothesis. Hiring difficulty fell sharply from 2007 to 2009 and rose only afterwards. If HR practices—and not supply and demand—determine recruitment duration, then one would have to credit them for the fall in hiring difficulty, not just the rise, as Cappelli does. The fact that hiring eased during the recession contradicts Cappelli’s claim that companies refused to hire qualified candidates.


So long as the economy continues to expand, hiring difficulty for skilled workers will worsen until substantially more people graduate or are trained in these fields. Companies can help by training and hiring candidates with the right skills who lack formal degrees, but ultimately, the supply of qualified workers will have to increase.