Recently, NPR’s Planet Money produced a fascinating series of videos exploring the process behind producing a simple T-shirt. As you might expect, it’s anything but simple. From harvesting cotton and spinning yarn to weaving fabrics and delivering shirts worldwide, there is an expansive global goods trade network fueling all this productive activity, which made us wonder: How does this play out at the metropolitan level in the United States?

The Planet Money series eloquently used the global T-shirt industry to show the role of the United States in the world’s attire market. Cotton mills used to be a major national employer and value creator. Today, our position is now primarily as a raw material harvester and final product marketer. The emblem of the U.S. textile industry is more Michael Jordan than actual sewing machines.

The United States is a huge player in textile manufacturing, ranking third in global exports and reaching several growing markets as it explores new agreements to increase trade. The range of producers and consumers engaged in this trade, including apparel firms and manufacturers of home furnishings, also points to the widespread impact of textiles in metropolitan economies. Beyond the T-shirts and clothing we wear every day, many metro areas specialize in creating the carpets that cover our factory floors, the medical fabrics we use in our hospitals, or the leather products we sell in our stores.

It should come as no surprise, then, that we move almost $950 billion in textiles annually, with the 100 largest metro areas accounting for 65 percent of this total. These areas also transport the most valuable textiles overall, averaging an impressive $13,320 per ton. For comparison’s sake, the average traded textile is worth more per ton than transportation equipment. In other words, we’re not just exchanging basic T-shirts.

Within all that trade, many metro areas remain net producers. New York and Los Angeles lead all regions in moving textiles with a combined volume of $131 billion, drawing from the strength of their fashion industries and related establishments. Each of these metro areas, moreover, runs a $13 billion surplus in textiles, highlighting their ability to distribute these goods to many different markets. Overall, 19 of the 100 largest metro areas run a surplus in textile trade. 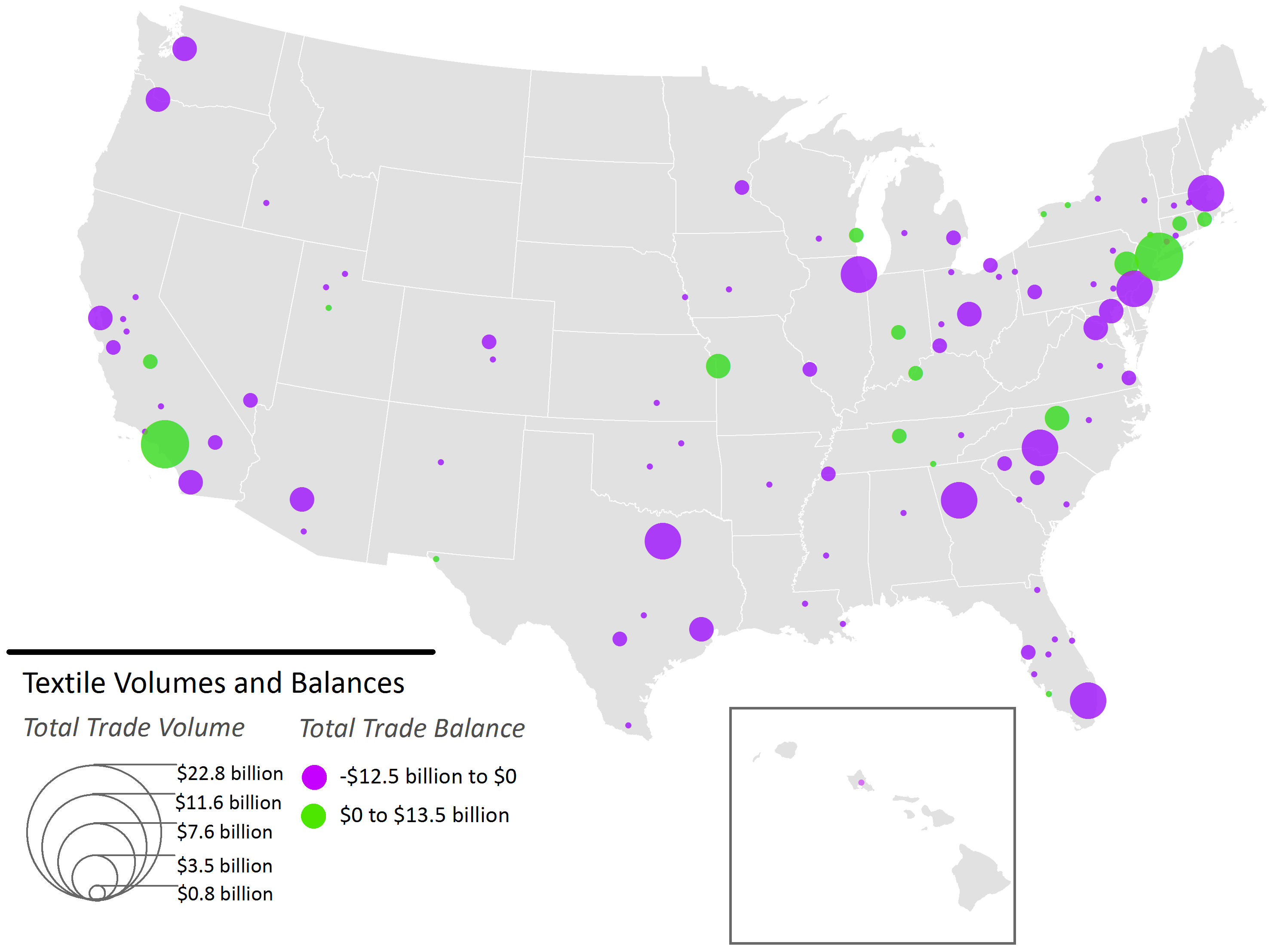 These numbers can help metro area leaders understand where they fit into larger trade networks and begin to target future export and freight strategies. For many places, these strategies depend on increasing global connectivity. Although the United States is a world leader in textiles, it only moves about $151 billion (or 14 percent) of these goods internationally, 87 percent of which are imports from countries like China and Mexico, greatly contributing to our trade imbalance. How can the metro areas producing high-value textiles, like Hartford and Kansas City, begin to sell more of their products on the global stage?

The world’s increasingly connected marketplace means the United States will experience widespread changes in the way it manufactures and transports certain products, whether dealing with T-shirts or automobiles. Yet, these changes do not have to signal the total decline of an industry. Instead, the American textile story proves metropolitan economies are nimble enough to find new opportunities on the fly.