Ready. Set. Stop! Over the past week, American employers have been sprinting to the finish line to submit their H-1B applications for fiscal year 2013. It took only 10 weeks this year to reach the FY2013 visa cap of 85,000. Last year, it took more than three times longer, 33 weeks. 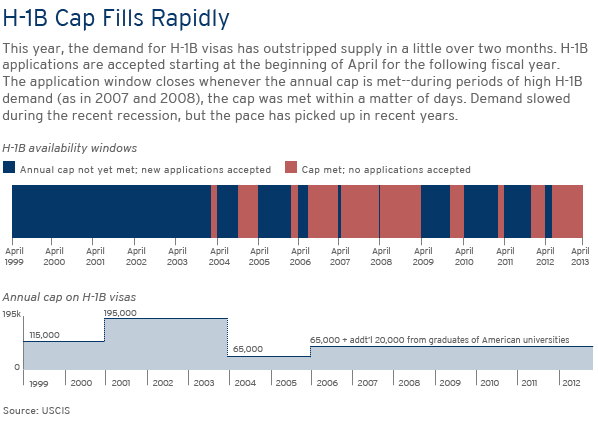 From Silicon Valley to America’s heartland, H-1B workers provide both large and small American companies with specialized skills in information technology, science, engineering, medicine, and other fields. This temporary visa program is used by U.S. employers to hire foreign workers for up to six years.  H-1B recipients must have a minimum of a bachelor’s degree, but more than half have master’s or doctoral degrees.

Every year at the beginning of April, employers race to snatch up the limited number of H-1B visas available for the upcoming year.  Since 2006 it has been set at 85,000 per fiscal year, which includes 20,000 that can only be used by foreigners possessing an American graduate degree.

Depending on the year, H-1B visas can run out in a matter of, days, weeks, or months.  During the Great Recession, the cap took as long as nine months to be reached.  But during years of economic growth, the cap was reached in a day or two. The only years when the demand for H-1B workers did not exceed the number of available visas were 2001 through 2003 when the cap was temporarily raised from 65,000 to 195,000.

This year’s higher demand may be an indicator of economic improvement  in some industry sectors. But the pace of filing could also be due in part to increased U.S. Citizenship and Immigration Services scrutiny of another temporary visa, the L-1 intracompany transfer.

There is some evidence that employers are applying for H-1B visas instead. The L-1 visa is another way for foreign workers with specialized knowledge to enter the U.S., but it can only be used for relocating company employees to the U.S. from overseas offices. It has been a major point of political contention this year, as critics claim many L-1 visa applications are fraudulent and put American workers at a disadvantage.

The uncertainty of when the cap will be reached makes it difficult for employers to plan their short- and long-term human resource needs since they cannot predict whether a visa will be available to hire qualified candidates that happen to be foreign. In order to better understand the impacts of H-1B workers in local labor markets, the Brookings Metropolitan Policy Program has geographically analyzed the demand for H-1B visas by U.S. metropolitan areas. That analysis will be available mid-July.

If America wants to lead in the global economy, policymakers must examine ways for U.S. employers to attract and retain the best that the world has to offer while at the same time educating and training U.S. workers to fill the demand for these jobs in the near future.   The short term H1-B sprint belies what essentially is a marathon for the nation.