The first decade of this century was a dud for job creation nationwide. With a weak recovery from the 2001 recession followed by the Great Recession, the nation as a whole gained almost no jobs during the decade (actually, there was a 0.3 percent increase). That made the aughts the first decade since the Great Depression without any substantial job growth.

But as with so many national statistics, this national average hides enormous regional variation. And since, for most people, job markets are regional, this regional variation really matters for working people. The map below shows what happened to employment in each of the nation’s 100 largest metro areas from the end of 1999 to the end of 2009.

Metro areas in the Northeast and Great Lakes regions mainly lost jobs. Detroit lost the most, shedding about one out of every five jobs it had at the end of 1999. Metro areas in the South and West mostly gained jobs. McAllen, Texas, gained the most; it had more than 40 percent more jobs at the end of 2009 than at the end of 1999. Even places like Las Vegas and Orlando, hit hard by the collapse of their housing bubbles during the Great Recession, had double-digit job growth during the decade.

The crux of the story is that the Great Recession affected different places in different ways. (For more of that story, see the latest
MetroMonitor
from Brookings.) What’s remarkable is that the interregional differences in the recession’s impact affected metro areas’ long-term growth patterns. The recession contributed to a big growth gap between the hardest-hit auto-dependent Great Lakes metros and the rest of the Northeast and Midwest. Likewise, it drove a big wedge between the growth rates of the housing-bust Sub Belt metros and other Sun Belt metros. If those gaps persist, then the way we think about regional growth will change. We won’t be talking about Sun Belt and Snow Belt anymore. Instead, we’ll be talking about the two Sun Belts and the two Snow Belts. 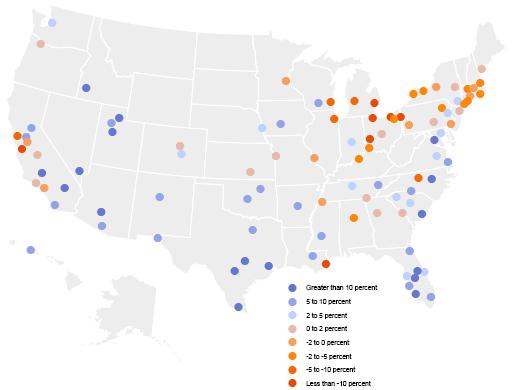